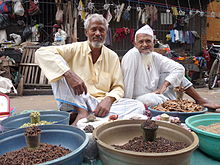 Spice Sellers in Market in Chinatown 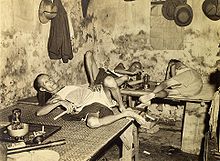 Chinatown (Bengali: চায়নাটাউন, কলকাতা) in the eastern part of the city of Kolkata is the only Chinatown in India.[1] The locality was once home to 20,000 ethnic Chinese, now the population has dropped to 2,000 or so. The traditional occupation of the Chinese community here had been working in the nearby tanning industry and the Chinese restaurants. The area is still noted for the Chinese restaurants where many people flock to taste traditional Chinese and Indian Chinese food.

During the time of Warren Hastings, the first governor-general of British India, a businessman by the name of Tong Achi established a steel mill at Achipur, 33 km from Calcutta, on the bank of the Hooghly River near Budge Budge.[2] A temple and the grave of Tong Achi still remain and are visited by many Chinese who come from the city during the Chinese New Year.[2]

One of the earliest records of immigration from China can be found in a short treatise from 1820. This records hints that the first wave of immigration was of Hakkas but does not elaborate on the professions of these immigrants. According to a later police census, there were 362 in Calcutta in 1837. A common meeting place was the Temple of Guan Yu, the god of war, located in the Chinese quarter near Dharmatolla.[3] A certain C. Alabaster mentions in 1849 that Cantonese carpenters congregated in the Bow Bazar Street area.[3] As late as 2006, Bow Bazar is still noted for carpentry, but few of the workers or owners are now Chinese.

According to Alabaster there were lard manufacturers and shoemakers in addition to carpenters. Running tanneries and working with leather was traditionally not considered a respectable profession among upper-caste Hindus, and work was relegated to lower caste muchis and chamars. There was a high demand, however, for high quality leather goods in colonial India, one that the Chinese were able to fulfill. Alabaster also mentions licensed opium dens run by native Chinese and a Cheena Bazaar where contraband was readily available. Opium, however, was not illegal until after India's Independence from Great Britain in 1947. Immigration continued unabated through the turn of the century and during World War I partly due to the fact that China was undergoing political upheavals such as the Opium Wars, First Sino-Japanese War and the Boxer Rebellion. Around the time of the First World War, the first Chinese-owned tanneries sprung up.[3]