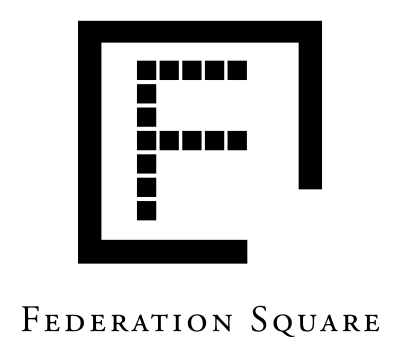 Federation Square (also colloquially known as Fed Square) is a cultural precinct in the city of , . It comprises a series of buildings containing a public broadcaster, art galleries, a museum, cinemas, exhibition spaces, auditoria, restaurants, bars and shops around two major s, one covered (The Atrium), the other open to the sky, and composed of two spaces that flow into one another (St. Paul's Court and The Square). The majority of the precinct is built on top of a concrete deck over busy railway lines.

Federation Square occupies roughly a whole bounded by Swanston, Flinders, and Russell Streets and the . The open public squares are directly opposite and St Paul's Cathedral. The layout of the precinct helps to connect the historical central district of the city with the Yarra River and a new park . This refocusing of the city on the Yarra River also partly reinforces links with the Southbank district, whose redevelopment has been ongoing as a key part of central Melbourne since the late 1980s.

The site of Federation Square has had a variety of former uses. The , and the Princes Bridge railway station were the immediate predecessors, [cite web
url=http://150.theage.com.au/view_bestofarticle.asp?straction=update&inttype=1&intid=923
work=The Age
title=Demolitions days
author=Fiona Whitlock
date=December 9, 1996
publisher=150.theage.com.au
accessdate=2008-03-16] though in the nineteenth century there was a on the site. The result of an international design competition held in 1997 that received 177 entries, [cite web
url=http://www.archmedia.com.au/aa/aaissue.php?issueid=199711&article=23&typeon=3
title=Federation Square: A Future About Shatters
date=November/December 1997
work=Architecture Australia
publisher=www.archmedia.com.au
accessdate=2008-03-16] Federation Square was designed by and Peter Davidson of .

When the winning bid was announced in 1997, the design was a source of great controversy, being widely supported by the design community and causing outrage among heritage advocates. There was a change of government during its construction, and the incoming Labor administration ordered a significant design revision to appease conservative critics. The original design included several five storey high 'shards', two of which were free-standing on the north-western edge of the precinct. These two structures were intended to provide a framed view of St. Paul's Cathedral from the St. Paul's Court part of the new plaza. A report drawn up by Evan Walker proposed that the westernmost shard interfered with a so-called "heritage vista", a view of the cathedral from the middle of the tram tracks on Princes Bridge to the south. [cite web
url=http://www.legislation.vic.gov.au/domino/Web_Notes/MediaRelArc02.nsf/17ed9415cb17e3d34a25682500254734/a67b79a740daadb34a25688800221da1!OpenDocument&Click=
title=GOVERNMENT ACCEPTS RECOMMENDATION TO SAVE ST PAUL’S VISTA
work=OFFICE OF THE PREMIER AND TREASURER: Media Release
date=February 17, 2000
publisher=www.legislation.vic.gov.au
accessdate=2008-03-16] A major controversy ensued and a single-storey version was the compromised result.

For a while after its opening on ,

However, the negativity was short-lived, with approximately 90% of people surveyed reported liking all, or at least parts, of Federation Square.

A key part of the plaza design is its large, fixed public screen, which has been used to broadcast major sporting events, such as the , and still continues to do so. During the 2006 , thousands of football fans braved cold nights to watch the matches on the Federation Square screen.

The complex of buildings forms a rough U-shape around the main open-air squares, oriented to the west. The eastern end of the square is formed by the glazed walls of The Atrium. While is used for the majority of the paving in the Atrium and St. Paul's Court, matching footpaths elsewhere in central Melbourne, the main square is paved in 470,000 -coloured sandstone blocks from

In addition to a number of shops, bars, s and s, Federation Square's cultural facilities include:
*The (ACMI)
*The
*The Amphitheatre
*The Melbourne headquarters of the (SBS), one of Australia's two publicly-funded national broadcasters
*Champions: Australian Racing Museum and Hall of Fame
*National Design Centre
*The Melbourne Tourist Information Centre

The Ian Potter Centre houses the Australian part of the art collection of the (NGV), and is located at Federation Square (international works are displayed at the NGV International on St Kilda Rd). There are over 20,000 Australian artworks, including paintings, sculpture, photography, fashion and textiles, and the collection is the oldest and most well-known in the country.

=ACMI – Australian Centre for the Moving

The has two cinemas that are equipped to play every film, video and digital video format, with attention to high quality acoustics. The screen gallery, built along the entire length of what was previously a train station platform, is a subterranean gallery for experimentation with the moving image. Video art, installations, interactives, sound art and net art are all regularly exhibited in this space. Additional venues within ACMI allow computer-based public education, and other interactive presentations.

"The Atrium" is one of the major s in the cultural precinct in central , Australia. It is a -like space, five-stories high with glazed walls and roof. The exposed metal structure and glazing patterns follow the geometry used elsewhere in the precinct's building . ["Brown-May, A and Day, N" (2003) Federation Square, South Yarra, Vic: Hardie Grant Books (ISBN 1-74066-002-1)]

The "Labyrinth" is a system sandwiched above the railway lines and below the middle of the square. The structure consists of 1.2 km of interlocking, honeycombed walls. It covers 160 m2. The walls have a zig-zag profile to maximize their surface area, and are spaced 60 cm apart.

During nights, cold air is pumped in the combed space, cooling down the concrete, while heat absorbed during the day is pumped out. The following day, cold air is pumped from the Labyrinth out into the Atrium through floor vents. This process can keep the Atrium up to 12 °C cooler than outside. This is comparable to conventional , but using one-tenth the energy and producing one-tenth the .

During , the process is reversed, whereby warm daytime air stored in the Labyrinth overnight, to be pumped back into the Atrium during the day.

The system can also partly cool the ACMI building when the power is not required by the Atrium.