The Melbourne Grand Prix Circuit is a street circuit around Albert Park Lake, only a few kilometres south of central Melbourne. It is used annually as a racetrack for the Australian Grand Prix and associated support races.

The circuit uses everyday sections of road that circle Albert Park Lake, a small man-made lake just south of the Central Business District of Melbourne. The road sections that are used were rebuilt prior to the inaugural event in 1996 to ensure consistency and smoothness. As a result, compared to other circuits that are held on public roads, the Albert Park track has quite a smooth surface. Before 2007 there existed only a few other places on the Formula 1 calendar with a body of water close to the track. Most of the new tracks, such as Valencia, Singapore and Abu Dhabi have imitated that feature.

The course is considered to be quite fast and relatively easy to drive, drivers having commented that the consistent placement of corners allows them to easily learn the circuit and achieve competitive times. However, the flat terrain around the lake, coupled with a track design that features few true straights, means that the track is not conducive to overtaking or easy spectating unless in possession of a grandstand seat. 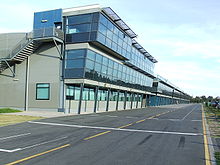 Each year, most of the trackside fencing, pedestrian overpasses, grandstands and other motorsport infrastructure are erected approximately a month prior to the Grand Prix weekend and removed within 6 weeks after the event. Land around the circuit (including a large aquatic centre, a golf course, a Lakeside Stadium, some restaurants and rowing boathouses) has restricted access during the grand prix weekend. Dissent is still prevalent among nearby local residents and some still maintain a silent protest against the event. Nevertheless, the event is reasonably popular in Melbourne and Australia (with a large European population and a general interest in motorsport). Middle Park, the home of South Melbourne FC was demolished in 1994 due to expansion at Albert Park.

On 4 July 2008, the official F1 site reported that more than 300,000 people attended the four-day Melbourne Grand Prix, though actual ticket sales were later disputed by the local media. The Grand Prix will continue until at least 2015 after securing a new contract with Formula One Management. There will be no night races in Albert Park but 2009’s event started at 5pm and took place between 26–29 March.

During the 9 months of the year when the track is not required for Grand Prix preparation or the race weekend, most of the track can be driven by ordinary street-registered vehicles either clockwise or anti-clockwise.

Only the sections between turns 3, 4 and 5, then 5 and 6, differ significantly from the race track configuration. Turn 4 is replaced by a car park access road running directly from turns 3 to 5. Between turns 5 and 6, the road is blocked. It is possible to drive from turn 5 on to Albert Road and back on to the track at turn 7 though two sets of lights control the flow of this option. The only set of lights on the actual track are half-way between turns 12 and 13 where drivers using Queens Road are catered for. The chicanes at turns 11 and 12 is considerably more open than that used in the grand prix, using the escape roads. Turn 9 is also a car park and traffic is directed down another escape road.

The speed limit is generally 50 kilometres per hour (31 mph) which is slower than an F1 car under pit lane speed restrictions. Some short sections have a speed limit of 40 kilometres per hour (25 mph). The back of the track, turns 7 to 13 inclusive, is known as Lakeside Drive. Double lines separate the two-way traffic along most of Lakeside Drive with short road islands approximately every 50 metres. This means overtaking is illegal here.

Approximately 50% of the track edge is lined with short parkland-style chain-linked fencing leaving normal drivers less room for error than F1 drivers have during race weekend. There is however substantial shoulder room between the outside of each lane and the fencing.