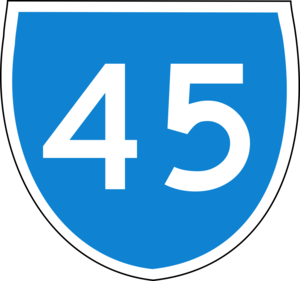 Brunswick Street runs north-south through the inner northern suburbs of Fitzroy and Fitzroy North, from Victoria Parade at its southernmost end, crossing Alexandra Parade, and continuing until it reaches St. Georges Road in Fitzroy North, near the Edinburgh Gardens; there, its former northward course is continued by a much smaller residential street named Brunswick Street North.

Tram route 112 runs along the entire length of Brunswick Street for part of its journey.

Brunswick Street, believed to be named after Captain Brunswick Smythe, owes its origins to Benjamin Baxter, who owned a lot of land along Victoria Parade, in the recently proclaimed township of Newtown (now Brunswick South). Baxter's lot was Lot 49, which was adjacent to Lot 48 on the north-west corner of Victoria Parade and Nicholson Street. In 1839 Baxter subdivided his lot into quarters, creating roads between the subdivisions. These became Brunswick Street and Gertrude Street. Initially, Brunswick Street only ran as far as what is now Hanover Street. In 1840, Mr R. S. Webb subdivided Lot 70, which was to the north of Baxter's lot. This extended Brunswick Street further north to Bell Street (originally known as Hamburg Street). The street was officially proclaimed in 1851.

Shops had appeared on Brunswick Street as early as the 1840s. By 1854 the strip rivalled Bourke Street as a shopping district.

After World War 2, large numbers of immigrants (principally from Mediterranean Europe) settled in the inner suburbs of Melbourne, including Fitzroy. Among them there were many Italians, who in turn imported machines and established the foundations of Melbourne's café culture.

For some decades, the suburb of Fitzroy was a grungy working-class area of low rents and cheap shops. This area began to attract students, artists and bohemians. The commenced in Cathedral Hall (now called 'Central Hall', just opposite St Vincents Hospital, in Brunswick Street, in 1970. The T. F. Much was the heart of Melbourne's music scene and saw stand out performances by Daddy Cool, Spectrum (and Murtceps), Carson, Capt Matchbox as well as several of Joe Camilleri's earlier incarnations.

In the 1980s, established its studios in Victoria Street, off Brunswick Street, the established itself as a significant live music venue, and independent record shop PolyEster Records opened. These businesses cemented Brunswick Street's status as a nexus of Melbourne's and /new-wave subcultures, which in turn drew in waves of suburban tourists in their teens and 20s. Brunswick Street also served as the home-base for integral techno/electronic label/promoter , from 1994 to 2001.

was not long in following, though the economic recession of the 1990s slowed it somewhat. One by one, the few remaining regular shops closed and were replaced by cafés, fashion boutiques and bars. The Punters Club closed in 2002, and 3RRR has relocated further out to Brunswick.

The turn of the century, however, has heralded a new dawn and Brunswick Street is home to a melting pot of artisans, housing commissioners, young professionals and boomers with excess retirement savings. The bars thrive and throughout the working week expect a regular trade. The visiting tourist would be advised to steer clear of Brunswick Street on Friday or Saturday night unless they hope to sample Melbourne's finest suburban CUBs at play.