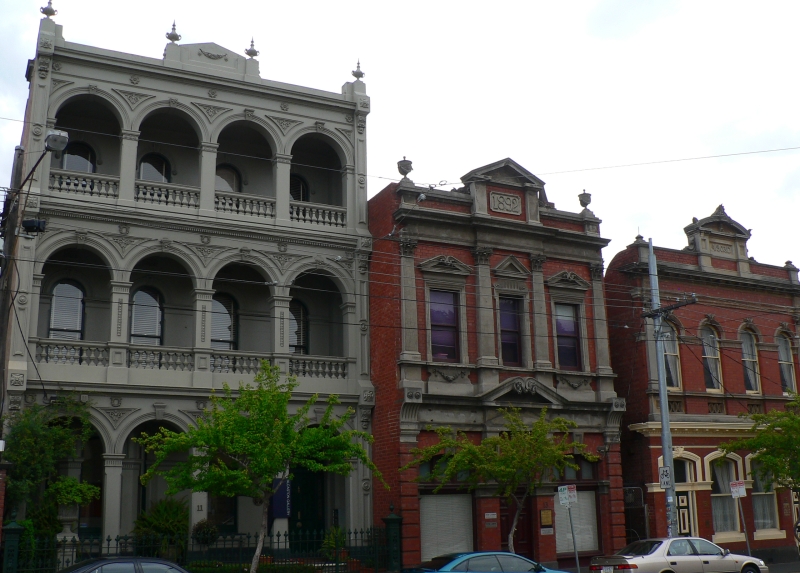 Fitzroy (sometimes referred to as South Fitzroy) is an of , Victoria, . It is in the Local Government Area of the . Its postcode is 3065. Fitzroy has two of the 82 designated Major Activity Centres in the Metropolitan Strategy - the commercial strips of Brunswick Street and Smith Street.

Fitzroy is one of the oldest suburbs in Melbourne and is bordered by Victoria St/Parade, Nicholson St, Smith St, and Alexandra Parade. The heart of Fitzroy can be found in Brunswick Street, which is one of Melbourne's major retail, eating, and entertainment strips. Fitzroy is inhabited by a wide variety of ethnicities and socio-economic groups.

Fitzroy is characterised by a fairly tightly-spaced rectangular grid of medium-sized and narrow streets with numerous back lanes. There are many one-way streets. Fitzroy is Melbourne's smallest suburb in terms of area, being approximately 100 Ha.

Fitzroy was Melbourne's first suburb, created when the area between Melbourne and Alexandra Parade (originally named Newtown) was subdivided into vacant lots and offered for sale. Newtown was later renamed Collingwood, and the area now called Fitzroy (west of Smith Street) was made a ward of the . On , Fitzroy became a municipality in its own right, separate from the City of Melbourne. Surrounded as it was by a large number of factories and industrial sites in the adjoining suburbs, Fitzroy was ideally suited to working men's housing, and from the 1860s to the 1880s, Fitzroy's working class population rose dramatically. The area's former mansions became boarding houses and slums, and the heightened poverty of the area prompted the establishment of several charitable, religious and philanthropic organisations in the area over the next few decades. A notable local entrepreneur was , whose confectionery factories engulfed several blocks and stand as heritage landmarks today.

The establishment of the in 1938 saw swathes of new residences being constructed in Melbourne's outer suburbs. With many of Fitzroy's residents moving to the new accommodation, their places were taken by post-war immigrants mostly from and , and the influx of Italian and Irish immigrants saw a marked shift towards Catholicism from Fitzroy's traditional Methodist and Presbyterian roots. The Housing Commission would build two estates in Fitzroy in the 1960s: one in Hanover Street and one at the southern end of Brunswick Street.

Like other inner-city suburbs of Melbourne, Fitzroy underwent a process of during the 1980s and 1990s. The area's manufacturing and warehouse sites were converted into apartments, and the corresponding rising rent prices in Fitzroy saw many of the area's residents move to Northcote and Brunswick. In June 1994, the was created by combining the cities of Fitzroy, Collingwood and Richmond.

The Moran and Cato warehouse designed by R.A. Lawson is considered to be of high architectural merit. The Old Tramways sheds are on the . The Champion Hotel is notable for its fanciful Edwardian design.

Fitroy's architecture is very diverse and features some of the finest architecture in Melbourne. The entire suburb is a precinct with many individual buildings covered by controls [ [http://www.dse.vic.gov.au/planningschemes/yarra/map.html] "And click on the following black codes in the maps - 1HO, 2HO, 5HO and 6HO. These are maps of the s"] . Among the earliest homes, Royal Terrace (1853-1858) on Nicholson Street overlooking the was one of the first s in Melbourne.

The character of Fitroy's architecture is a legacy of its early history when a mixture of landuses was allowed to develop in close proximity to each other, producing a great diversity of types and scales of building ["Fitzroy : Melbourne's first suburb / Cutten History Committee of the Fitzroy History Society. Published South Yarra, Vic. : Hyland House, 198 ISBN 0947062521"] . While many of Fitzroy's streets have examples of fine Victorian houses, there are also many examples of workers cottages, terraces, corner shops and pubs, warehouses and factories rubbing shoulders in the space of few metres. Additionally, there are examples of infill development from the 1970s such as 'six-pack' style flats and units, along with the large-scale results of 'slum clearance' programs of the in the 1960s that bestowed some of Melbourne's most well-known and visible high-rise in the form of the estate on the corner of Brunswick and Gertrude Streets that houses about 3,000 people, or a third of Fitzroy's population. Fact|date=July 2008

Fitzroy is considered one of the centres of in Melbourne. There are many small commercial art galleries, s and s located within the suburb. Fitzroy has a thriving community and is also the home of and the .

Fitzroy is a hub for live music in Melbourne, and plays host to several prominent venues: the , , the , , Cape Live and the Empress Hotel (in Fitzroy North). The well-known was also located in the area; however, it was forced to close in 2002.

The offices of the are in Johnston Street.

Fitzroy has a large number of pubs for such a small suburb. The former Devonshire Arms hotel was located in Fitzroy Street and remains the oldest building in Fitzroy. There are many other pubs in Fitzroy.

Known locally as "The Land of Breakfast", the tiny suburb of Fitzroy has many cafes with good kitchens. Only one of the original three Cafe's is still standing - Marios. Bakers relocated North, and closed in 2007 while The Black Cat has transformed itself into a bar, but still retains it's onstreet garden. With the advance of , a variety of cafes in different styles have opened up and down Brunswick Street, on Smith Street, parts of Gertrude Street and in some of the back streets in former s and warehouse sites.

The (the Fitzroy Lions) was formed in 1883 as part of the VFL/AFL. The club had some early success before relocating its home games several times and finally running into financial difficulties in the 1980s, forcing it to merge with the to form the . The club sponsors the who play in the and play out of the Brunswick Street Oval. The Fitzroy Stars Football Club are an Indigenous club that joined the Northern Football Leaguein 2008. They currently play their home games at Crispe Park in Reservoir.

The health needs of Fitzroy residents and other Melburnians is served by St Vincent's Hospital.

Fitzroy has a long tradition of community activism and civil society with many social and community service organisations having been been based there. Organisations currently operating in the suburb include: the , , Society of Saint Vincent de Paul, and the , a free legal service for residential tenants.

Organisations which were formed in Fitzroy and have since moved their base include:

There are no railway stations located in Fitzroy itself, with the nearest train stations being Rushall in North Fitzroy, Collingwood station and Parliament station.

Being Melbourne's oldest suburb, Fitzroy has many old buildings and a large number that have been classified as having heritage significance. There are many individual buildings with a heritage listing and almost the entire suburb is subject to heritage protection in the planning scheme.