Tram route 112 is a public transport service in Melbourne, Victoria, Australia. It runs from West Preston, in the northern suburbs to St Kilda.

Like most tram routes in Melbourne, it falls within Metcard/myki ticketing Zone 1.

The Fitzroy, Northcote and Preston Tramways Trust had started constructing a system but it wasn't until after its takeover by the Melbourne and Metropolitan Tramways Board that services first ran, on 1 April 1920, part of this system included a line from Barkly Street, Fitzroy North to Regent Street, Preston.[2] This network was orphaned from the rest of the electric network until 24 March 1925 when a line along Holden Street, Pilkington Street and Barkly Street was built by the Melbourne and Metropolitan Tramways Board to allow access to the CBD via Lygon Street.[3]

On 8 November 1959 the track along Mary St and Beaconsfield Parade, St Kilda West were abandoned in favour of a short extension along Park Street to Fitzroy Street, St Kilda, route 112's current terminus.[5]

In 2005 route 112 was part of the Think>Tram project, with measures aimed at improving tram services introduced to Clarendon Street, South Melbourne.[6] 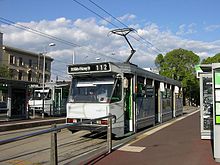 A class tram on route 112 at St Vincent's Plaza

Route 112 is run from East Preston depot[7] and Southbank depot[8] and is predominantly run with A class and B2 class trams although D2 class occasionally run the route.