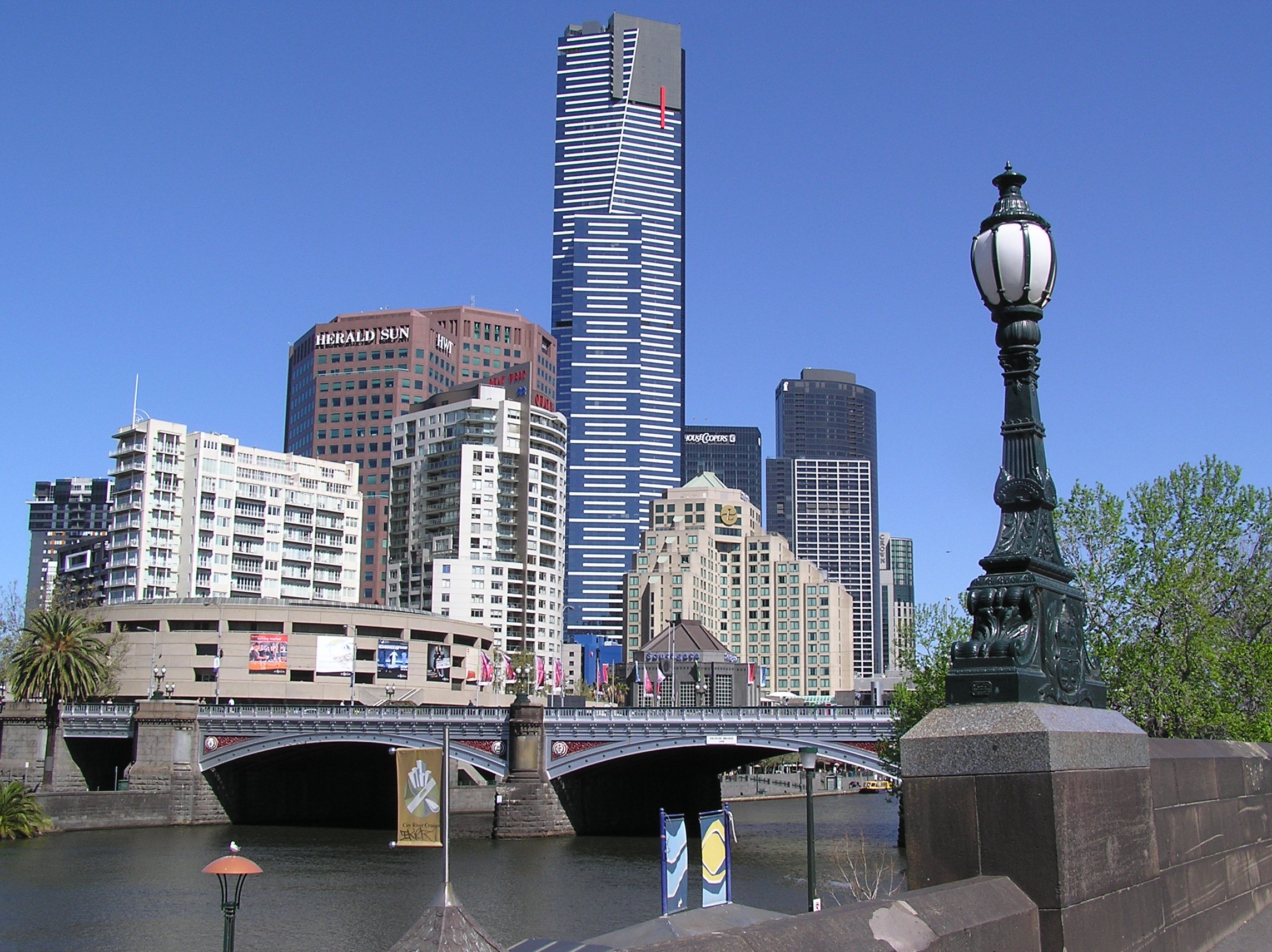 Bordered to the north by the Yarra River, and to the east by St Kilda Road, Southgate's southern and western borders are bounded by Dorcas Street, Kings Way, Westgate Freeway and Montague Street. [http://www.melbourne.vic.gov.au/rsrc/PDFs/SuburbsPrecincts/MELB3004_SOUTHBANK_SOUTHYARRA_SOUTHWHARF.pdf The City of Melbourne: Map of Southbank and South Wharf]

Southbank was formerly an industrial area and part of South Melbourne. It was transformed into a densely populated suburb of high rise buildings beginning in the early 1990s as part of an program.

Few buildings built before this time have been spared redevelopment. The exceptions were the existing Arts precinct on the eastern end and along St Kilda Road which includes and (1960s), parts of the campus as well as the Victoria Barracks and . Rare pockets of heritage on the western side includes the National Trust museum and five storey Tea House built in the 1880s.

The central feature of Southbank is Southgate Arts and Leisure Precinct, a retail, eating, and entertainment precinct on the southern bank of the . Southgate features the iconic sculpture "Ophelia" by , which is the big Y symbol (representing Melbourne) that stands at Bear Brass cafe. The entertainment precinct extends along the Yarra and includes . The suburb also includes an office precinct and a hi-density residential precinct which has many skyscrapers, the tallest of which is the . The Queensbridge Precinct includes Queensbridge Square, a pedestrian plaza and meeting place.

In May, 2008 the Victorian Government created the new suburb place and name ‘South Wharf’, in the western end of Southbank (encompassing the Melbourne Exhibition and Convention Centre and Polly Woodside National Trust museum). [ [http://www.melbourne.vic.gov.au/info.cfm?top=66&pa=779&pg=1395 The City of Melbourne: Suburb profiles: Southbank] ] South Wharf has no residential population and a small economy and business sector with some employment (estimated at around 15 businesses employing 1,200 workers). South Wharf is still an area predominantly under development which will eventually add another convention centre, a hotel and significant retail. Southbank and South Wharf share the same postcode (3006) [http://www1.auspost.com.au/postcodes/ Australia Post] .

The Southbank promenade, designed by architects Denton Corker Marshall, runs from Princes Bridge along to Queens Bridge street and Queens Bridge which also incorporates Queensbridge Square and continuing to the west of the Bridge is "Yarra Promenade", which runs underneath Kings Way and Kings Bridge to Clarendon Street, Spencer Street Bridge including Crown Entertainment Complex and promenade restaurants.

The Southbank art and craft market occurs on the promenade near the Arts Centre every Sunday. The promenade is also home to several s and a pavement chalk artists.

Before British settlement, the area now called South Melbourne was a series of low lying swamps inhabited by Aboriginal tribes.

During the time after British settlement, the area which is now Southbank consisted of some old factories, warehouses and wharves mostly built between the 1860s-1920s when the area was part of the first port of Melbourne. It had a few old bridges, the first being the first Princes Bridge and later the which was formerly part of the Port Melbourne railway line from 1888 to 1987, and the Arts centre precinct which was built in the 1960s on a former parkland.

The suburb was the subject of in the early 1990s aimed at stimulating development in a period when Melbourne was experiencing an economic downturn.

designed and oversaw the original Southbank Promenade in 1990 which paved the way for development of apartments.

Southgate, Sheraton towers and new tall buildings for and were built along with an award winning pedestrian footbridge at about the same time in late 1992, and combined with a new Sunday arts and crafts market, attracted local and tourist visitors to the area. At the eastern end of the area is the .

Further buildings including the headquarters were built between 1992 and 1995. Development expanded along the Yarra westward with the Melbourne Convention and Exhibition Centre ("Jeff's Shed") in 1996 and in 1997, stimulating the first residential towers. In 2001, the boutique "Melburnian" apartments, designed by were one of the first to be aimed at the owner occupier market and included the most expensive penthouse sold in Melbourne at the time. Clarendon Towers also attracted the owner occupiers. Beginning with Southbank Towers in 2001 and the Centurion in 2002, began a swathe of apartment towers and at the same time the neighbouring Yarra's Edge precinct of the new Melbourne Docklands began to kick off.

The arts precinct was extended with the construction of the award winning buildings for the in 2002 and the school of drama. At around the same time a new headquarters for the was built.

Central Equity continued construction of several blocks of apartment buildings on much of the Southbank land which it had acquired including Riverside Place, The Summit, Melbourne Tower and City Tower. Most of them are aimed at the rental market and managed by Melbourne Inner City Management (MICM) a division of Central Equity.

With a boom in apartment building and the success of the Melburnian, the areas closer to the river began to attract developers. The 91 floor was begun in 2002, aimed at being the tallest residential tower in the world and was completed in 2006.

The Queensbridge Precinct began development in 2005 with . A plaza linked to the north bank and via a pedestrian and cycle path developed from the Sandridge Bridge. The formerly disused bridge was opened to the public on 12 March 2006, just in time for the . The Northbank promenade was completed later in 2006 to link the sections.

An increasing number of corporations began opening their offices in Southbank. relocated their office from Spring Street to in 2005. Other names on the list include , and .

A number of tram lines run through Southbank.

Although Southbank promenade forms part of the Capital City Bicycle Trail, the large number of pedestrians in the area means bicycle riding at high speed is hazardous; advisory signs have been posted to try to keep cyclists at speeds of 10 km/h or less.

* - the former local government area of which Southbank was a part.