The City Circle is a zero-fare tram running around the central business district of Melbourne, Australia. Aimed towards tourists the route passes many Melbourne attractions while running along the CBD's outermost thoroughfares, as well as the developing Docklands waterfront precinct. 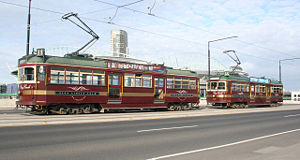 The tram route was introduced on 29 April 1994,[1] requiring a small track extension along Spring Street to enable a complete CBD loop to be formed.[2] The Commonwealth Government's Building Better Cities program funded the $6.4 million capital cost of the track expansion, while the State Government funded the running costs.[3] The original route of the tram included Spencer Street as the western edge until January 2003, when the route was extended west into Docklands. The travel time before this change was 40 minutes.[4]

During early 2006, new Passenger Information Displays (PIDs) were installed with Digital Voice Announcements (DVA) from the series 1 announcements. The information display upgrades were due to the unreliability and the storage capacity problems since the route extension into Docklands.

In April 2008, the service adopted the daylight saving timetable on a permanent basis, operating from 10am to 9pm every Thursday, Friday and Saturday. The end of service at other times is 6pm.[5]

On 30 May 2009, the route was altered for a second time, extended from Harbour Esplanade to the NewQuay and Waterfront City precincts via Docklands Drive. This made the route an elongated 'q'.[6]

Interior of a W class tram in City Circle service 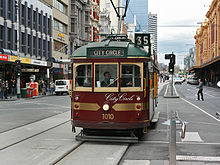 The route of the City Circle trams roughly follows the outer edges of the Hoddle Grid, with three diversions. It takes in all of La Trobe Street, Harbour Esplanade and Flinders Street. It follows Spring Street between Flinders Street and Bourke Street, but travels along Nicholson Street and Victoria Street before turning into La Trobe. At the junction of Harbour Esplanade and Latrobe Street trams turn off the loop to run to and from a terminus towards the end of Docklands Drive, Waterfront City.

The City Circle route is serviced by heritage W class trams liveried in special maroon and green with yellow and gold trimmings, however rolling stock shortages often see MMTB's standard traditional green liveried W Class trams on the service. Trams display the route number 35.[7] The City Circle operates at a headway of 12 minutes in both directions, with the service taking approximately 48 minutes to complete a loop.[8] Eight trams are allocated to the service at any one time (four in each direction). An average of three million passengers uses the service every year, with each tram circling the city 11 times a day, or 14 times when the tram operates to 9pm.[5]