San José ("Saint Joseph", Spanish: San José, pronounced: [saŋ xoˈse]) is the capital and largest city of Costa Rica. Located in the Central Valley, San José is the seat of national government, the focal point of political and economic activity, and the major transportation hub of this Central American nation.

Founded in 1738 by order of Cabildo de León, San José is one of the youngest capital cities in Latin America by year of conception, though it was not named capital until 1823.[2] Today it is a modern city with bustling commerce, brisk expressions of art and architecture, and spurred by the country's improved tourism industry, it is a significant destination and stopover for foreign visitors.[3]

The population of San José Canton is 365,799,[4] though the metropolitan area stretches beyond the canton limits and comprises a third of the country's population. San José exerts a strong influence on a wider range because of its proximity to other cities (Alajuela, Heredia and Cartago) and the country's demographic assemblage in the Central Valley.[5]

The city lies at a mean elevation of 1,161 m above sea level, and enjoys a stable climate throughout the year, with an average temperature of 25oC (77oF) and annual precipitation of 1800 mm, more than 90% of it falling in the rainy season from May to November.[6]

University of Santo Tomás, the first university of Costa Rica was established here in 1843. That institution maintained close ties with the Roman Catholic Church and was closed in 1888 by the progressive and anti-clerical government of President Bernardo Soto Alfaro as part of a campaign to modernize public education. The schools of law, agronomy, fine arts, and pharmacy continued to operate independently, but Costa Rica had no university proper until 1940, when those four schools were re-united to establish the modern University of Costa Rica (UCR), during the reformist administration of President Rafael Ángel Calderón Guardia. San José serves as the headquarters of the Inter-American Court of Human Rights. The city is served by Juan Santamaría International Airport, 23 km west of downtown, in the city of Alajuela.

The districts are divided up into a number of neighborhoods (local name: "barrios").[7]

Buses Private bus companies connect different areas of the city with each other and the suburbs. During rush hours most buses are stuck in traffic, as in most capital cities, but in general the system is efficient and cheap. Services to other parts of the country are provided by private companies which have stations or stops at random locations spread all over the city center (there is no central bus station).

Train There are now trains to Heredia from Estación Atlantico and Belen (just south of Alajuela airport) from Estación Pacifico. These only run on weekdays between 6am to 9am and 4pm to 8pm, every half an hour. There are plans to extend services to Alajuela and Cartago, but that will probably not be for another few years. There is another train that runs from Pavas in the west to Curridabat in the east of the city, which only runs every hour very early in the morning and in the evening. There is no service at weekends. Timetables are available at http://horariodetren.com/cr/

Taxis Taxis are fairly cheap, but you should make sure they use the meter (taximetro). It starts at 550 colones for the first few kilometres and a journey from Barrio Amon to most of the bus stations costs about 1500 colones. Avoid taxis that hang around the Coca Cola area, especially those that approach you grinning and speaking in English when you get off the bus. From the airport there is a special system with orange taxis that you pay for in advance at a kiosk in arrivals. They are slightly more expensive (25$ to San Jose) but the cars are all new and they are more trustworthy.

Costa Rican cuisine (comida típica) is not spicy, but it is tasty and simple, and in San José, it is easy to find. Costa Rican food is wholesome and reasonably priced. Throughout San José, the most popular food is the national dish of gallo pinto, which is a mixture of fried rice and black beans. Gallo pinto is usually served for breakfast with tortillas and natilla, a thin sour cream. Costa Rican restaurants serving traditional food at an affordable price are called sodas and usually offer casados for lunch and dinner. A casado (which means "married" in Spanish) consists of rice, beans, and meat, and normally comes with cabbage-and-tomato salad, fried plantains, and/or tortillas. [8]

San José City lies in the Torrid Zone and is in a tropical rainforest. However its elevation gives it a mild climate. Under the Köppen climate classification it features a Tropical wet and dry climate that borders on a subtropical highland climate. The temperature ranges between 15 and 30 °C (59 and 86 °F). Relative humidity averages 68.2% (with extremes of 55% in March and 78% in October)[9] and the daily range tends to be between 60% and 90%, with the humidity typically dropping to the lower end of this range near mid-day and rising again during the night. It rains on an average of 170 days per year[9] but half the rainfall pours down on only 15[citation needed] of these days. The rainy season is from May to mid-November, but cloudiness and rainfall can occur during the dry season. There are approximately 2040 hours of sunshine per year.[9] The weather is also very windy[quantify][citation needed]; this may decrease the apparent temperature. 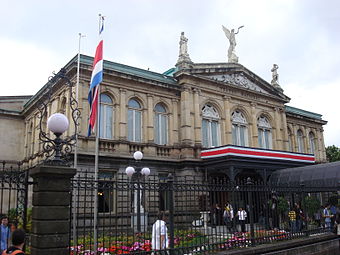 The downtown area, located in the Central Edificio Correos building, is loaded with cafes. The National Theater and The Melico Salazar Theatre, where national coffee is prepared and served in typical Costa Rican ways.

There are also many museums and other attractions offering alternative ways of exploring the city. One of these is the Gold Museum, which offers an unusual view of various gold artifacts of the ancient Latin American civilizations. An interesting attraction is the Lankester Botanical Garden at the outskirts of San José. This garden and many other attractions not far from San José can be visited on the multiple day tours offered in the city. Other attractions include various bars and clubs which concentrate their activity on holding musical shows and events.

Other historical sites such as Teatro Teatro Variedades San José's oldest theater and the first place where movies where shown in Costa Rica are located in the proximities. Patrimonio NacionalThe building belongs to the many patrimonial sites in old San José. 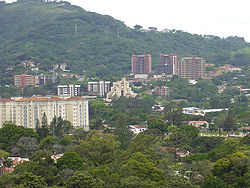