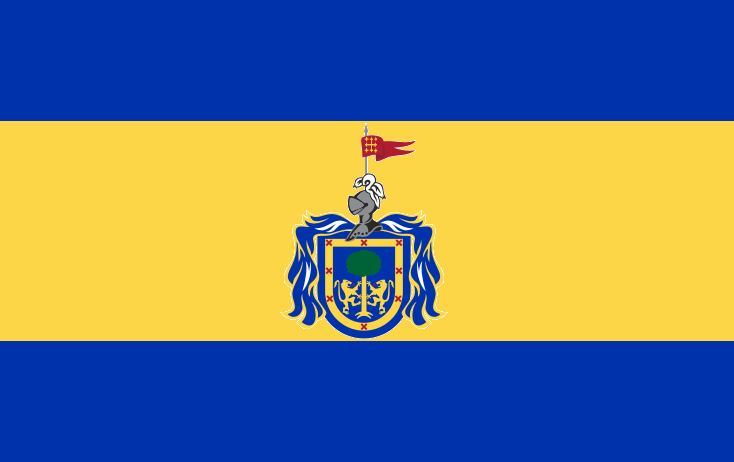 seal_size =
image_shield = Jalisco coat.png Jalisco is a state in . The capital of Jalisco is the city of Guadalajara. In the 2005 census, Jalisco had a population of 6,752,113 people. Jalisco is known for being the birthplace of music.

The state of Jalisco borders the to the west, and the states of to the northwest, , and to the north, to the east, and and to the south. It has an area of convert|79085|km2|sqmi|0|abbr=on.

Mexico's largest freshwater lake, , lies within the boundaries of Jalisco.

The provides that the of Jalisco, like the government of every other state in Mexico, formally consists of three branches: the executive, the legislative and the .

Like the rest of Mexico, the state of Jalisco is divided into municipalities (communes), most of which are named after the town that serves as the municipal seat. Unlike English-language municipalities, Mexican municipalities include both a central city or town and surrounding villages, towns and rural land. Each municipio has a . The largest municipio in Jalisco is Mezquitic.

The population of Jalisco is around 6,753,114 inhabitants according to the 2005 INEGI census. The 2000 INEGI census indicates that there are about 4,000,000 people in the greater Guadalajara metropolitan area. The overall population growth rate for Jalisco in the 2000-2005 period was 1.8%, and it is estimated that the economically active population is 1,756,501 [ [ http://www.e-local.gob.mx/work/templates/enciclo/jalisco/-->] ]

The majority of Jalisco's population is of Spanish descent, including many from the Criollo caste. People of descent, mostly of origin, make up about 0.4% of the population. In addition to those of Huichol descent, some Nahua communities exist along the coast as well as in the interior of the state near present day towns of Tenemaxtlán and Atenguillo. The state also contains a large population, who are of mixed European and Amerindian descent, centered mostly in and to the east of Guadalajara.

Jalisco is the center of the Mexican industry, and the town of , which gave its name to the famous liquor, is located there. The volcanic soil covering much of the state of Jalisco is particularly well suited for the cultivation of the plant, which is used as the base for tequila.

There are many hypothesis about where this lively music originated from, but most people agree that Cocula, Jalisco was its birth place. This is contradicted, however, by the fact that most famous Mariachi songs/groups weren't from Jalisco.

Today, Mariachis are seen as a symbol of the Mexican Revolution and as the Mexican pride. Mariachi groups are usually hired for festive occasions, such as birthday parties, quinces (traditional parties for women who are turning 15 years of age), and weddings.

The indigeneous people (wirrarita or wixarita in the huichol language), live in the north of Jalisco. It is hard to get to the towns of Huichols, as they are somewhat isolated because of the mountains. They call themselves "wixarica", "The People," in their own language. The name Huichol comes from their name in the Nahuatl language.

Their language belongs to the linguistic division of , from the Familie . This language is related to the language.