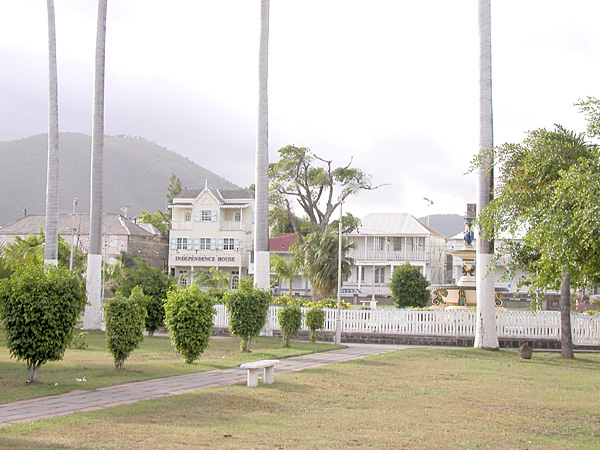 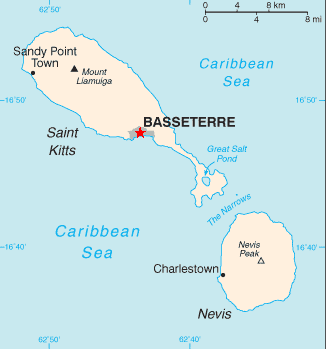 Basseterre (pronEng|bæsˈtɛər), estimated population 15,500 in 2000, is the of the Federation of in the West Indies. Geographically, the "Basseterre" port is located at coord|17|18|N|62|44|W|display=inline,title, on the south western coast of Island, and it is one of the chief commercial depots of the . The city lies within the parish of Saint George Basseterre and the southern part of the parish of Saint Peter Basseterre.

Basseterre is one of the oldest towns in the Eastern Caribbean.

Basseterre was founded in 1627 by the French, under Sieur . It served as capital of the French colony of St. Christophe, which consisted of the northern and southern extremities of the island of St. Kitts (the centre was yielded to Britain). When Phillipe de Longviliers de Poincy was made the French governor of St. Kitts in 1639, the town turned into a large, successful port, commanding Eastern Caribbean trade and colonisation. De Poincy then quickly made Basseterre capital of the entire French West Indies colony, which included the islands of and , and remained so until his death in 1660. The city was made capital of the entire island of St. Kitts in 1727, following French expulsion from the island and full British control.

The city of Basseterre has one of the most tragic histories of any Caribbean capital, destroyed many times by colonial wars, fire, earthquakes, floods, riots and hurricanes. Despite all of this, a considerable number of well-restored buildings still exist in downtown Basseterre.

The city of Basseterre skirts a 2-mile bay on the southwestern shore of St. Kitts, Basseterre Bay. The city lies within the large , almost completely surrounded by lush green hills and mountains. It is primarily low-lying, which is one explanation for the name which the French gave unto it, as Basseterre translates to "low land" in English. However, the name Basseterre is also due to the fact that the island is on the lee of winds of the island, and is thus a safe anchorage. The name Capesterre, given to the region to the North, was dubbed so as it was facing the wind. Basseterre is surrounded by the Olivees Mountains to the north and the Conaree-Morne peaks to the east. The city is drained by the College River and the Westbourne River, which are locally known as "ghauts" and are dry most of the year. They even form streets in downtown Basseterre. This engineering folly has proven quite disastrous though, as College River has been the scene of many disastrous [http://upload.wikimedia.org/wikipedia/commons/b/bf/St_Kitt_flood_1880.pdf/ floods] in Basseterre history. Port Zante, located in the centre of the bay, lies on 15 acres of land reclaimed from the sea in 1995.

Basseterre has a tropical marine climate, with temperatures around 27C year-round.

Basseterre is a very small town which is laid out in a grid pattern. It has four main streets running west to east, and they are listed here in sequence from south to north: Bay Road, Liverpool Row, Central Street and Cayon Street. The main street running north to south is Fort Street/Bank Street, which is home to the bulk of the island's main shops and banks. The city has 2 centres, at The Circus, which is geared towards tourism purposes, and the Independence Square, which contains the cathedral, courthouse and most of the older buildings.

Basseterre is the main commercial and industrial centre of St. Kitts. It is also the country's main port of entry, for both sea and air travel, as well as the road and rail transport hub. It houses the administration buildings for the federal government (those for the island of Nevis are in Charlestown). It also houses the headquarters of the , as well as the headquarters for many other regional financial institutions.

Despite its small size, Basseterre played host to Carifesta VII (the Caribbean Festival of Arts) in 2000, outbidding rivals many times its size. The city was able to outbid the United States of America, to host matches for the 2007 World Cricket Cup. The was the site of the allocated first round matches of the tournament. This made St. Kitts and Nevis the smallest country in the world ever to host a World Cup event.

Basseterre and its environs are home to many small, American-owned medical schools such as , and also two prestigious medical institutions founded by : the Ross University School of Veterinary Medicine and the International University of Nursing. The city has four secondary schools, two of which are government owned, and two are private schools.

There are a large number of Christian churches in the city for its size. Most are , due to British colonization, but the cathedral in Basseterre is . The , also called the "Church of England" has the largest number of members, followed by the . Other Protestant denominations include Moravian, , , Seventh-day Adventist, , Rivers of Living Water and . sects are also widespread.

The city is also a major Eastern Caribbean industrial centre, its main exports being bass, electronics, beverages, clothing wear and salt. The once dominating sugar industry closed in 2005, due to overwhelming debts and further predicted hardships due to major price cuts planned by the EU. There are specified industrial estates, which carry out sub-sonic technology, food processing, light engineering, engineering and rum distilling.

Business: Banks are open 8am-2pm, Hours: Monday to Thursday, and 8am-4pm on Fridays.

Shops are open:
* 8am-4pm Mondays to Wednesdays
* 8 am-noon Thursdays
* 8 am-5pm Fridays and
* 8am-4pm Saturdays.Payment cards are accepted only at major stores and shops.

Telecommunications: the international dialling code for Saint Kitts and Nevis is 869 followed by seven digits.On the islands, use the seven digits alone.When on the islands, to call anywhere in the United States or Canada simply dial 1+ (area code) + seven digit phone number.

Basseterre is hub for all major roads on the island of St. Kitts. Driving is done on the left. The speed limit in the city is 25 mph everywhere, with special caution to be taken around school zones.

No public buses travel southwards to the main resort areas in Frigate Bay and the South East Peninsula.

Taxis have yellow license plates starting with the letter "T" or "TA". The taxi station in Basseterre is located at the Circus (466 6999). The taxis will take you just about anywhere for a pre-calculated price.

The Deep Water Harbour in Basseterre is capable of both hosting and berthing of cruise ships or the handling of cargo. It is located to the extreme East of Basseterre Bay.

Port Zante, in the centre of the Bay, is for use of docking cruise ships only. The Port can accommodate the largest cruise ships in the world. It also has a marina facility.

The serves the city of Basseterre, and is located in the city's most North Easternly area. It has direct flights to London and Miami and seasonal flights to Charlotte, NC and Philadelphia, PA in addition to other major cities in the U.S.A. and Canada during the tourist season.

St. Kitts' 58km of narrow(0.762m)-gauge railway centre in Basseterre, and swoop the island in a circular pattern. The railway lines, originally built to transport sugar cane to the central sugar factory in Basseterre, are now used to transport tourists via the "St. Kitts Scenic Railway Train" which currently runs from Sandy Point to Basseterre, travelling East.

Famous people born in Basseterre include: