Guatemala City (in full, La Nueva Guatemala de la Asunción; locally known as Guatemala or Guate), is the capital and largest city of the Republic of Guatemala and Central America. It is also the capital city of the local Municipio de Guatemala, and Guatemala Department. 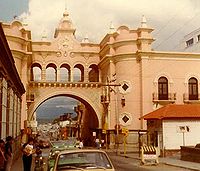 Within the confines of modern Guatemala City is the ancient Maya city of Kaminaljuyu. Kaminaljuyu was first occupied between 1200 and 1000 BC and the city continued to be inhabited for about 2000 years before it was abandoned in the Late Classic Period of Mesoamerican chronology (600–900 AD).[1] It is one of America's most notable archaeological sites. The center of Kaminaljuyu was located a short distance from the oldest part of Guatemala City. However, in the late 20th century, the city grew around the ruins, and, in some cases, over some of the outlying ruins before they were protected.

Many of the several hundred temple mounds have been built over with freeways, shopping centers, commerce, luxury hotels and residential areas. The central ceremonial center of Kaminaljuyu was however protected by the Guatemalan government and is now a park within the city. There are also many ruins still in existence, protected by the government.

In Spanish colonial times, Guatemala City was a small town. It had a monastery called El Carmen, founded in 1629. The capital of the Spanish Captaincy General of Guatemala, covering most of modern Central America, was moved here after a series of earthquakes - the Santa Marta earthquakes that started on July 29, 1773 - destroyed the old capital, Antigua Guatemala.[2] On September 27, 1775, King Charles III of Spain officialized the moving of the capital. This dramatically increased the potential for expansion of the city. 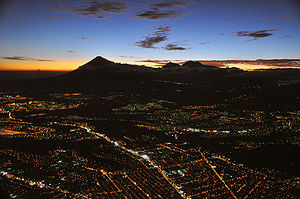 Evening view from a plane

Guatemala City is the economic, governmental, and cultural capital of the Republic. The city also functions as the main port of entry into the country, with international airport, La Aurora International Airport and most major highways in the country originating or leading to the city. The city continues to be a pole for the attraction of immigrants from the country's rural areas as well as foreign immigrants.

In addition to a wide variety of restaurants, hotels, shops, and a modern BRT transport system (Transmetro), the city has a wide variety of art galleries, theaters, sports venues and museums (including some fine collections of Pre-Columbian art) and continually offers an increasing amount of cultural activities. Guatemala City offers all the modern amenities along with important historic sites that a world class city can be expected to have ranging from an IMAX Theater to the Ícaro film festival (Festival Ícaro) featuring films produced in Guatemala and Central America.

Despite its location in the tropics and the many micro climates found within the country, Guatemala City's elevation and the resulting moderating influence of the higher altitude enable it to enjoy a subtropical highland climate (Köppen Cwb), though depending on location (due to variations in height -Guatemala having up to 70 meters in difference, being lower in the south of the city), it also borders on a tropical savanna climate (Köppen Aw). Guatemala City is generally mild, almost springlike, throughout the course of the year. It occasionally gets warm during the dry season, but it is nowhere near as hot as other sea-level cities located in the tropics. The rainy season extends from May to October while the dry season covers the remainder of the year. The weather in Guatemala City is also very windy; this may decrease the apparent temperature even more. Hottest month is April. 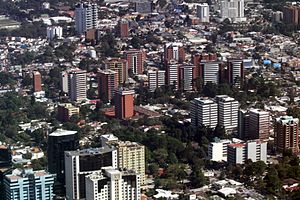 Guatemala City is subdivided into 22 zones designed by the urban engineering of Raúl Aguilar Batres, each one with its own streets and avenues, making it very easy to find addresses in the city. Zones are numbered 1-25 with Zones 20, 22 and 23 not yet existing.[5] Addresses are assigned according to the street or avenue number, followed by a dash and the number of meters it is away from the intersection further simplifying address location.

Zone One is the Historic Center, (Centro Histórico), lying in the very heart of the city, the location of many important historic buildings including the Palacio Nacional de la Cultura (National Palace of Culture), the Metropolitan Cathedral, the National Congress, the Casa Presidencial (Presidential House), the National Library and Plaza de la Constitución (Constitution Plaza, old Central Park). Efforts to revitalize this important part of the city have been undertaken by the municipal government and have been very successful thus far.

In an attempt to control rapid growth of the city, the municipal government (Municipalidad de Guatemala) headed by long time Mayor Álvaro Arzú, has implemented a plan to control its growth based on transects along its important arterial roads and exhibitting Transit-oriented development (TOD) characteristics. This plan denominated POT (Plan de Ordenamiento Territorial) aims to allow taller building structures of mixed uses to be built next to large arterial roads and gradually decline in height and density as you move away from such.[6]

As of the 2002 census, the metropolitan area had a population of 2.3 million.[7] However, it has grown in excessive amounts throughout recent years.[citation needed] Guatemalans have a diversity of origins, with Spanish and Mestizo descent being the most common. Guatemala City also has a sizeable Indigenous population and minority groups such as Germans and other Europeans, Jewish, Asians primarily Chinese and Korean, and many groups of other Latin American origins such as Peruvian, and Colombian amongst others.

Guatemala City's population has experienced drastic growth since the 1970s with the influx of indigenous migrants from the outlying departments as well as a large influx of foreign groups. For this reason along with several others, Guatemala City has experienced some growth problems such as transportation saturation, availability of safe potable water in some areas at certain times as well as increased crime. The infrastructure, although continuing to grow and improve, at times appears to be lagging in relation to the population explosion. In other words, Guatemala City faces problems common to many other rapidly expanding cities.

Guatemala City is home to many communication company headquarters, since it has some of the highest rates of people that can access internet, telephone communication and television communication. The most popular communication companies in Guatemala are, Tigo, Claro-Telgua, and Movistar-Telefonica. All of these companies provide 3G networks in the country, TV-Cable, Internet and International Roaming. There are 7 local television channels, apart from all kinds of international channels ranging from kids channels such as Nickelodeon or Disney Channel to channels such as E!, HBO, etc. As well as informational, news, European and Asian channels.

Places of interest by zones

Guatemala City is subdivided into 22 zones designed by the urban engineering of Raúl Aguilar Batres, each one with its own streets and avenues, making it very easy to find addresses in the city. Zones are numbered 1-25 with Zones 20, 22 and 23 not yet existing.[5] 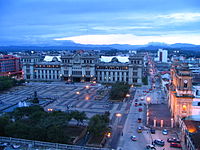 Main square with the National Palace opposite.

Plaza Fontabella Lifestyle Center in Zone 10 with Edificio Atlantis in the background.

Buildings in Guatemala City as seen from La Aurora Int'l Airport Concourse with the old historic airport in the forefront.

[9] Traditional buses are now required to discharge passengers at central stations at the city's edge to board the Transmetro. This is being implemented as new Transmetro lines become established. In conjunction with the new mass transit implementation in the city, there is also a prepaid bus card system called Transurbano that is being implemented in the metro area to limit cash handling for the transportation system. A new fleet of buses tailored for this system has been purchased from a Brazilian firm.

Guatemala City possesses several sportsgrounds and is home to many sports clubs. Soccer is the most popular sport, with CSD Municipal, Aurora FC and Comunicaciones being the main clubs. The Estadio Mateo Flores, located in the Zone 5 of the city, is the largest stadium in the country, followed in capacity by the Estadio Cementos Progreso and the Estadio del Ejército. An important multi-functional hall is the Domo Polideportivo de la CDAG.

The city has hosted several promotional functions and some international sports events: in 1950 it hosted the VI Central American and Caribbean Games, and in 2000 the FIFA Futsal World Championship. On July 4, 2007 the International Olympic Committee gathered in Guatemala City and voted Sochi to become the host for the 2014 Winter Olympics and Paralympics.[13] In April 2010, it hosted the XIVth Pan-American Mountain Bike Championships.[14]

Guatemala City was announced in November 2007 to host the 2008 edition of the CONCACAF Futsal Championship, played at the Domo Polideportivo from June 2 to June 8, 2008.[15][16] 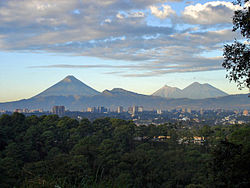 View of Guatemala City with the Agua, Fuego and Acatenango volcanoes in the background.

Guatemala City has been affected several times by earthquakes. The worst quakes were registered in 1917/1918 and 1976. Another much less severe earthquake occurred near the city in September 2011.

Four volcanoes are visible from the city, two of them active. The nearest and most active is Pacaya, which at times expels a considerable amount of ash.[17]

Due to heavy rainfalls some of the humble neighborhoods built at the edge of steep valleys are frequently washed away and buried under mudslides, as in October 2005.[18] 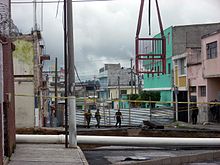 In February 2007, a very large, deep circular hole with vertical walls opened in a poor neighborhood in northeast Guatemala city 14°39′1.40″N 90°29′25″W﻿ / ﻿14.650389°N 90.49028°W﻿ / 14.650389; -90.49028, killing three people. This hole, which is classified by geologists as either a "piping feature" or "piping pseudokarst", was 100 metres (330 ft) deep, and apparently was created by fluid from a sewer eroding uncemented volcanic ash and other pyroclastic deposits underlying Guatemala City.[19][20] As a result, one thousand people were evacuated from the area.[21] The piping feature has since been mitigated and plans to develop on the site have been proposed. However, critics believe municipal authorities have neglected needed maintenance on the city's aging sewerage system, and have speculated that more piping features are likely to develop unless action is taken.[22] 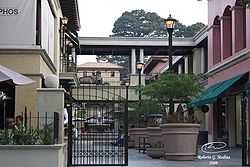 Zone Ten, along with being the financial district of the city, is among the most popular areas for pop culture, shopping and entertainment. A district within Zone Ten, known as Zona Viva, contains many of the city's most popular and most expensive hotels, restaurants, bars, nightclubs, and other entertainment venues for urban dwellers. Also, many of the embassies are located in Zone Ten.

Guatemala City is twinned with: