Part of the myosin II structure. Atoms in the heavy chain are colored red on the left-hand side, and atoms in the light chains are colored orange and yellow.

Myosins comprise a family of ATP-dependent motor proteins and are best known for their role in muscle contraction and their involvement in a wide range of other eukaryotic motility processes. They are responsible for actin-based motility. The term was originally used to describe a group of similar ATPases found in striated and smooth muscle cells.[1] Following the discovery by Pollard and Korn of enzymes with myosin-like function in Acanthamoeba castellanii, a large number of divergent myosin genes have been discovered throughout eukaryotes. Thus, although myosin was originally thought to be restricted to muscle cells (hence, "myo"), there is no single "myosin" but rather a huge superfamily of genes whose protein products share the basic properties of actin binding, ATP hydrolysis (ATPase enzyme activity), and force transduction. Virtually all eukaryotic cells contain myosin isoforms. Some isoforms have specialized functions in certain cell types (such as muscle), while other isoforms are ubiquitous. The structure and function of myosin is strongly conserved across species, to the extent that rabbit muscle myosin II will bind to actin from an amoeba.[2]

Most myosin molecules are composed of a head, neck, and tail domain.

Multiple myosin II molecules generate force in skeletal muscle through a power stroke mechanism fuelled by the energy released from ATP hydrolysis.[3] The power stroke occurs at the release of phosphate from the myosin molecule after the ATP hydrolysis while myosin is tightly bound to actin. The effect of this release is a conformational change in the molecule that pulls against the actin. The release of the ADP molecule and binding of a new ATP molecule will release myosin from actin. ATP hydrolysis within the myosin will cause it to bind to actin again to repeat the cycle. The combined effect of the myriad power strokes causes the muscle to contract.

Nomenclature, evolution, and the family tree

The wide variety of myosin genes found throughout the eukaryotic phyla were named according to different schemes as they were discovered. The nomenclature can therefore be somewhat confusing when attempting to compare the functions of myosin proteins within and between organisms.

Skeletal muscle myosin, the most conspicuous of the myosin superfamily due to its abundance in muscle fibers, was the first to be discovered. This protein makes up part of the sarcomere and forms macromolecular filaments composed of multiple myosin subunits. Similar filament-forming myosin proteins were found in cardiac muscle, smooth muscle, and non-muscle cells. However, beginning in the 1970s researchers began to discover new myosin genes in simple eukaryotes[1] encoding proteins that acted as monomers and were therefore entitled Class I myosins. These new myosins were collectively termed "unconventional myosins"[4] and have been found in many tissues other than muscle. These new superfamily members have been grouped according to phylogenetic relationships derived from a comparison of the amino acid sequences of their head domains, with each class being assigned a Roman numeral[5][6][7][8](see phylogenetic tree). The unconventional myosins also have divergent tail domains, suggesting unique functions.[9] The now diverse array of myosins likely evolved from an ancestral precursor (see picture). 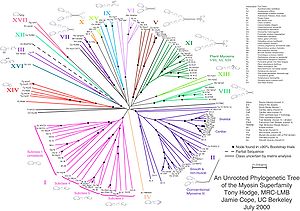 Analysis of the amino acid sequences of different myosins shows great variability among the tail domains but strong conservation of head domain sequences. Presumably this is so the myosins may interact, via their tails, with a large number of different cargoes, while the goal in each case - to move along actin filaments - remains the same and therefore requires the same machinery in the motor. For example, the human genome contains over 40 different myosin genes.

These differences in shape also determine the speed at which myosins can move along actin filaments. The hydrolysis of ATP and the subsequent release of the phosphate group causes the "power stroke," in which the "lever arm" or "neck" region of the heavy chain is dragged forward. Since the power stroke always moves the lever arm by the same angle, the length of the lever arm determines the displacement of the cargo relative to the actin filament. A longer lever arm will cause the cargo to traverse a greater distance even though the lever arm undergoes the same angular displacement - just as a person with longer legs can move farther with each individual step. The velocity of a myosin motor depends upon the rate at which it passes through a complete kinetic cycle of ATP binding to the release of ADP.

Myosin I functions as monomer and functions in vesicle transport.[10] It has step size of 10 nm and has been implicated as being responsible for the adaptation response of the stereocilia in the inner ear.[11] 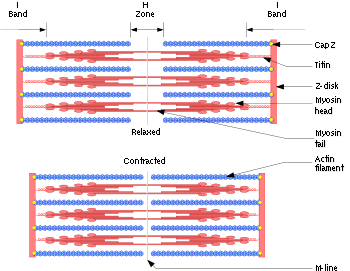 In muscle cells, the long coiled-coil tails of the individual myosin molecules join together, forming the thick filaments of the sarcomere. The force-producing head domains stick out from the side of the thick filament, ready to walk along the adjacent actin-based thin filaments in response to the proper chemical signals.

Myosin III is a poorly understood member of the myosin family. It has been studied in vivo in the eyes of Drosophila, where it is thought to play a role in phototransduction.[14] A human homologue gene for myosin III, MYO3A, has been uncovered through the Human Genome Project and is expressed in the retina and cochlea.[15]

Myosin IV has a single IQ motif and a tail that lacks any coiled-coil forming sequence. It has homology similar to the tail domains of Myosin VII and XV.[16]

Myosin V is an unconventional myosin motor, which is functional as a dimer. It translocates (walks) along actin filaments traveling towards the barbed end (+ end) of the filaments. Myosin V was thought to be critical in vesicle movement from the center of the cell to the periphery, but has been shown to be more like a dynamic tether retaining vesicles and organelles in the actin-rich periphery of cells.

Myosin VI is an unconventional myosin motor, which is primarily functional as a dimer but also acts as a nonprocessive monomer. It walks along actin filaments travelling towards the minus end of the filaments.[18] Myosin VI is thought to transport endocytic vesicles into the cell.[19]

Myosin VII is an unconventional myosin with two FERM domains in the tail region. It has a very short coiled-coiled region. Myosin VII is required for phagocytosis in Dictyostelium discoideum, spermatogenesis in C. elegans and stereocilia formation in mice and zebrafish.[20]

Myosin VIII is a plant-specific myosin linked to cell division;[21] specifically, it is involved in regulating the flow of cytoplasm between cells[22] and in the localisation of vesicles to the phragmoplast.[23]

Myosin IX is a single-headed, minus-end directed group of motor proteins. The movement mechanism for this myosin is poorly understood.[24]

Myosin X is an unconventional myosin motor, which is functional as a dimer. In mammalian cells the motor is found to localize to filopodia. Myosin X walks towards the barbed ends of filaments. Some research suggests that it preferentially walks on bundles of actin, rather than single filaments. It is the first myosin motor to exhibit this behavior.

Myosin XI directs the movement of organelles as plastids and mitochondria in plant cells.[25] It is responsible of the light-directed movement of chloroplasts according to light intensity and the formation of stromules interconnecting different plastids.

This myosin group has been found in the Apicomplexa phylum.[26] The myosins localise to plasma membranes of the intracellular parasites and may then be involved in the cell invasion process.[27]

This myosin is also found in the ciliated protozoan Tetrahymena thermaphila. Known functions include: transporting phagosomes to the nucleus and perturbing the developmentally regulated elimination of the macronucleus during conjugation.

Myosin XV is a motor that is involved in the structuring and motion of stereocilia of in the inner ear. It is thought to be functional as a monomer.

Note that not all of these genes are active.

Myosin light chains are distinct and have their own properties. They are not considered "myosins" but are components of the macromolecular complexes that make up the functional myosin enzymes.

Paramyosin is a large 93-115kDa muscle protein that has been described in a number of diverse invertebrate phyla.[28] It is thought that invertebrate thick filaments are composted of an inner paramyosin core that is surrounded by myosin. The myosin interacts with actin resulting in fibre contraction.[29] Paramyosin is found in many different invertebrate species, for example, Brachiopoda, Sipunculidea, Nematoda, Annelida, Mollusca, Arachnida, Insecta.[28] Paramyosin is responsible for the "catch" mechanism that enables sustained contraction of muscles with very little energy expenditure, such that a clam can remain closed for extended periods.