The cochlea is the auditory portion of the inner ear. It is a spiral-shaped cavity in the bony labyrinth, making 2.5 turns around its axis, the modiolus.[1] A core component of the cochlea is the Organ of Corti, the sensory organ of hearing, which is distributed along the partition separating fluid chambers in the coiled tapered tube of the cochlea.

The name is from the Latin for snail shell, which is from the Greek κοχλίας kokhlias ("snail, screw"), from κόχλος kokhlos ("spiral shell")[2] in reference to its coiled shape; the cochlea is coiled in most mammals, monotremes being the exceptions. 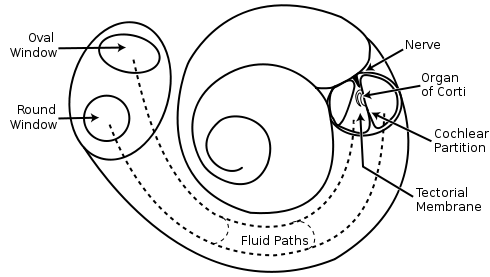 Structural diagram of the cochlea showing how fluid pushed in at the oval window moves, deflects the cochlear partition, and bulges back out at the round window.

The cochlea is a spiralled, hollow, conical chamber of bone, in which waves propagate from the base (near the middle ear and the oval window) to the apex (the top or center of the spiral). Its structures include:

The walls of the hollow cochlea are made of bone, with a thin, delicate lining of epithelial tissue. This coiled tube is divided through most of its length by an inner membranous partition. Two fluid-filled outer spaces (scalae) are formed by this dividing membrane. The fluid in both of these ouiding membrane. This continuation at the helicotrema allows fluid being pushed into the scala vestibuli by the oval window to move back out via movement in scala tympani and deflection of the round window; since the fluid is nearly incompressible and the bony walls are rigid, it is essential for the conserved fluid volume to exit somewhere.

The lengthwise partition that divides most of the cochlea is itself a fluid-filled tube, the third scala. This central column is called the scala media, or cochlear duct. Its fluid, endolymph, also contains electrolytes and proteins, but is chemically quite different from perilymph. Whereas the perilymph is rich in sodium ions, the endolymph is rich in potassium ions, which produces an ionic, electrical potential.

The cochlear duct is almost as complex on its own as the ear itself. It is bounded on its three sides by the basilar membrane, the stria vascularis, and Reissner's membrane. Stria vascularis is a rich bed of capillaries and secretory cells; reissner's membrane is a thin membrane that just separates endolymph from perilymph; and the basilar membrane is a mechanically somewhat stiff membrane, supporting the receptor organ for hearing, the organ of Corti, and determines the mechanical wave propagration properties of the cochlear system.

The cochlea is filled with a watery liquid, the perilymph, which moves in response to the vibrations coming from the middle ear via the oval window. As the fluid moves, the cochlear partition (basilar membrane and organ of Corti) moves; thousands of hair cells sense the motion via their cilia, and convert that motion to electrical signals that are communicated via neurotransmitters to many thousands of nerve cells. These primary auditory neurons transform the signals into electrochemical impulses known as action potentials, which travel along the auditory nerve to structures in the brainstem for further processing.

The stapes (stirrup) ossicle bone of the middle ear transmits vibrations to the fenestra ovalis (oval window) on the outside of the cochlea, which vibrates the perilymph in the scala vestibuli (upper chamber of the cochlea). The ossicles are essential for efficient coupling of sound waves into the cochlea, since the cochlea environment is a fluid–membrane system, and it takes more pressure to move sound through fluid–membrane waves than it does through air; a pressure increase is achieved by the area ratio of the tympanic membrane to the oval window, resulting in a pressure gain of about 20× from the original sound wave pressure in air. This gain is a form of impedance matching – to match the soundwave travelling through air to that travelling in the fluid–membrane system.

At the base of the cochlea, each scala ends in a membranous portal that faces the middle ear cavity: The scala vestibuli ends at the oval window, where the footplate of the stapes sits. The footplate vibrates when the pressure is transmitted via the ossicular chain. The wave in the perilymph moves away from the footplate and towards the helicotrema. Since those fluid waves move the cochlear partition that separates the scalae up and down, the waves have a corresponding symmetric part in perilymph of the scala tympani, which ends at the round window, bulging out when the oval window bulges in.

The perilymph in scala vestibuli and the endolymph in scala media act mechanically as a single duct, being kept apart only by the very thin Reissner's membrane. The vibrations of the endolymph in the scala media displace the basilar membrane in a pattern that peaks a distance from the oval window depending upon the soundwave frequency. The organ of Corti vibrates due to outer hair cells further amplifying these vibrations. Inner hair cells are then displaced by the vibrations in the fluid, and depolarise by an influx of K+ via their tip-link-connected channels, and send their signals via neurotransmitter to the primary auditory neurons of the spiral ganglion.

For very low frequencies (below 20 Hz), the waves propagate along the complete route of the cochlea – differentially up scala vestibuli and scala tympani all the way to the helicotrema. Frequencies this low still activate the organ of Corti to some extent, but are too low to elicit the perception of a pitch. Higher frequencies do not propagate to the helicotrema, due to the stiffness-mediated tonotopy.

A very strong movement of the basilar membrane due to very loud noise may cause hair cells to die. This is a common cause of partial hearing loss and is the reason why users of firearms or heavy machinery often wear earmuffs or earplugs.

Amplification by the hair cells

Not only does the cochlea "receive" sound, it generates and amplifies sound when it is healthy. Where the organism needs a mechanism to hear very faint sounds, the cochlea amplifies by the reverse transducer of the OHCs, converting electrical signals back to mechanical in a possitive-feedback configuration. The OHCs have a protein motor called prestin on their outer membranes; it generates additional movement that couples back to the fluid–membrane wave. This "active amplifier" is essential in the ear's ability to amplify weak sounds.

The active amplifier also leads to the phenomenon of soundwave vibrations being emitted from the cochlea back into the ear canal (otoacoustic emissions).

Otoacoustic emissions are due to a wave exiting the cochlea via the oval window, and propagating back through the middle ear to the eardrum, and out the ear canal, where it can be picked up by a microphone. Otoacoustic emissions are important in some types of tests for hearing impairment, since they are present when the cochlea is working well, and less so when it is suffering from loss of OHC activity.

The coiled form of cochlea is unique to mammals. In birds and in other non-mammalian vertebrates, the compartment containing the sensory cells for hearing is occasionally also called “cochlea,” despite not being coiled up. Instead, it forms a blind-ended tube, also called the cochlear duct. This difference apparently evolved in parallel with the differences in frequency range of hearing and in frequency resolution between mammals and non-mammalian vertebrates. Most bird species do not hear above 4–5 kHz, the currently known maximum being ~ 11 kHz in the barn owl. Some marine mammals hear up to 200 kHz. The superior frequency resolution in mammals is due to their unique mechanism of pre-amplification of sound by active cell-body vibrations of outer hair cells. A long coiled compartment, rather than a short and straight one, provides more space for mapping pitches, so is therefore better adapted to the highly derived functions in mammalian hearing.[6]

In 2009, engineers at the Massachusetts Institute of Technology created an electronic chip that can quickly analyze a very large range of radio frequencies while using only a fraction of the power needed for existing technologies; its design specifically mimics a cochlea.[7][8]