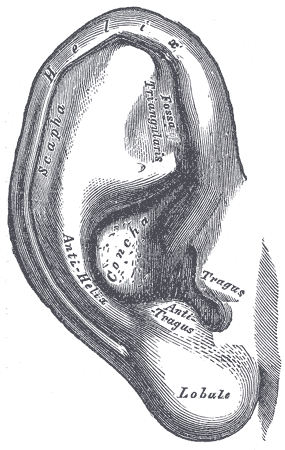 
Caption2 =
Precursor =
System =
Artery = posterior auricular, anterior auricular
Vein =
Nerve = Trigeminal Nerve, Greater Auricular, Lesser Occipital
Lymph = To Pre & Post Auricular Nodes, Nodes of Parotid and Cervical Chains
MeshName =
MeshNumber =
DorlandsPre = a_73
DorlandsSuf = 12169627
The pinna ( for ) is the visible part of the that resides outside of the head (this may also be referred to as the auricle or auricula).

The purpose of the pinna is to collect sound. It does so by acting as a funnel, amplifying the sound and directing it to the . While reflecting from the pinna, sound also goes through a filtering process which adds directional information to the sound (see , , ). The filtering effect of the human pinna preferentially selects sounds in the frequency range of human speech.

Amplification of sound by the pinna, tympanic membrane and middle ear causes an increase in level of about 10 to 15 dB in a frequency range of 1.5 kHz to 7 kHz. This amplification is an important factor in trauma resultingfrom elevated sound levels.

The pinna works differently for low and high frequency sounds. For low frequencies, it behaves similarly to a reflector dish, directing sounds toward the ear canal. For high frequencies, however, its value is more sophisticatedly reckoned. While some of the sounds that enter the ear travel directly to the canal, others reflect off the contours of the pinna first: these enter the ear canal at a very slight delay. Such a delay translates into , where the frequency component whose wave period is twice the delay period is virtually eliminated. Neighboring frequencies are dropped significantly. This is known as the pinna notch, where the pinna creates a notch filtering effect.

The diagram shows the shape and location of these components:

*Anthelix (antihelix) forms a 'Y' shape where the upper parts are:
**Superior crux (to the left of the fossa triangularis in the diagram)
**Inferior crux (to the right of the fossa triangularis in the diagram)
*Antitragus is below the tragus
*Auricular sulcus is the depression behind the ear next to the head
*Concha is the hollow next to the ear canal
*Conchal angle is the angle that the back of the concha makes with the side of the head
*Crus of the helix is just above the tragus
*Cymba conchae is the narrowest end of the concha
* is the opening to the
*Fossa triangularis is the depression in the fork of the anthelix
*Helix is the folded over outside edge of the ear
*Incisura anterior (auris) is between the tragus and the antitragus
*Lobe (lobule) - attached or free according to a classic single-gene
*Scapha
*Tragus

The developing Pinna is first noticeable around the sixth week of gestation in the human foetus, developing from six rounded protuberances (the six hillocks of Hiss) which are derived from the first and second branchial arches.These hillocks develop into the folds of the pinna and gradually shift upwards and backwards to their final position on the head. En-route accessory auricles (also known as preauricular tags - see below) may be left behind.The first three Hillocks are dervied from the 1st branchial arch and form the tragus, crus of the helix and helix respectively. Cutaneous sensation to these areas is via the trigeminal nerve, the attendant nerve of the 1st branchial arch.The final three Hillockes are derived from the 2nd branchial arch and form the antihelix, antitragus and lobule respectively. These portions of the ear are supplied by the cervical plexus and a small portion by the facial nerve. This explains why vesicles are classically seen on the Pinna in Herpes infection of the facial nerve ( Ramsay-Hunt Syndrome)

There are various visible ear abnormalities:

*Bat ear (also known as wingnut ear) &mdash; an ear that protrudes
*Cryptotia (hidden ear) &mdash; upper auricular sulcus not visible
*Cup deformity &mdash; helical rim is compressed
*Darwinian tubercle (auricular tubercle) &mdash; a projection from the helical rim
*Lop ear &mdash; the top of the helical rim folded over
* (also known as big ears, or hypertrophy of the ears)
* (small or partially developed ears)
*Preauricular sinus (small holes usually visible from birth at the front of the ears where the pinna joins the head)
*Accessory Auricles (small pieces of skin at the front of the ears where the pinna joins the head, vestigial remnants of the developing ears migration to its final position)
*Rim kinks &mdash; a kink of the helical rim
*Selhurst's handle (also known as cup handle) &mdash; an ear that can be 50% larger than normal.
*Stahl’s bar (also known as Spock ear) &mdash; third crus (in between the superior crux and inferior crux) making the top of the ear pointed
*Zaheer's ear &mdash; having a deformed anti-tragus, which appears as a bump, as opposed to a protrusion, which would normally allow the snug insertion of headphones