Offenbach am Main is a city in Hesse, Germany, located on southside of the river Main just next to Frankfurt am Main. In 2009 it had a population of 118,770. The city is part of the Frankfurt/Rhine-Main metropolitan area as well as the Frankfurt urban area.

Offenbach was a center of the leather industry, which has however declined in the last decades. It is still the seat of the Deutsches Leder Museum (German Leather Museum), and also of the international leather fair. 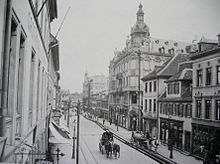 The main street Frankfurter Straße around 1900

The first documented reference to Offenbach appears in 770.During the Middle Ages Offenbach passed through many hands. Only in 1486 could the Count Ludwig of Isenenburg finally take control of city for his family, and 1556 Count Reinhard of Isenburg relocated his Residence to Offenbach, building a palace, the Isenburger Schloß (Isenburg Palace), which was completed in 1559. It was destroyed by fire in 1564 and rebuilt in 1578.

In 1635 Offenbach given to the Landgraves of Hesse-Darmstadt but it was returned to the Isenburg-Birstein Count (later Prince) in 1642 and remained in that Principality until 1815 when the Congress of Vienna gave the city to the Austrian Emperor, Francis II, Holy Roman Emperor. A year later it was given to the Grand Duchy of Hesse-Darmstadt.

Always very close to the city centre of Frankfurt, Offenbach was a popular location for business. The town has an own trade fair, many companies opened facilities because of less restrictions and no close businesses. French Protestants (Huguenots) came in the 17th centuries and settled in Offenbach and contributed to making Offenbach a prosperous city e.g. bringing the knowledge of tobacco with them and turning Offenbach into a centre for rolling cigars. The town was more cosmopolitan than Frankfurt, famous persons like Goethe and Mozart visited it several times.

The Rumpenheim Palace and its park was a popular destination of monarchs in the 19th century. The city was thereafter ruled by Grand Dukes of Hesse and by Rhine until the monarchy was abolished in 1918.

During the Second World War a third of the city was destroyed by Allied bombing which claimed 467 lives. With the new district Lauterborn the city was expanded to south in the 1960s. On the border to Frankfurt the office district Kaiserlei was built. 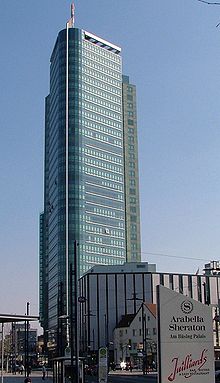 Until the early 1970s Offenbach was dominated by the machine-building and leather industries. The city hosts the German Association for Electrical, Electronic and Information Technologies to this day. The Deutscher Wetterdienst, commonly abbreviated as DWD, (translated from German as German Meteorological Service), residing in the Westend district.

Offenbach was also the European center of typography, with Gebr. Klingspor and Linotype (inventors of Optima or Palatino typeface) moving to nearby Eschborn in the 1970s and MAN Roland printing machines still a major employer today. Typography and design still remain important with a cluster of graphic design and industrial design companies, as well as the university level HfG Offenbach design school and the Klingspor Museum.

In recent years Offenbach has become a popular location for a wide array of services, especially from the transport sectors. Offenbach is the host to the European headquarters of Honda, Hyundai Motors.[citation needed] and Kumho Tires.[2] 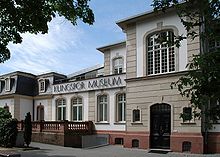 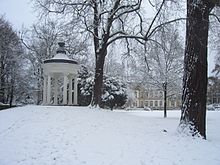 In Offebach there is no specific Old Town, but there are several buildings to see which survived bombing during the war and have been restored. One of them is the neo-Baroque palace Büsingpalais with the Büsingpark, reconstructed in the 1980s. Now it is used as a congress center close to the Sheraton hotel. Between the shopping area and the Main, is the Lilipark and the Lilitemple, named after Goethe’s fiancee Lili Schönemann. The most important building is the Isenburg Palace a renaissance palace from 1576 with an impressive facade. It is today used by the Offenbach Design University which is next to it. There is also a neoclassic palace in the borough Rumpenheim, the Rumpenheimer Schloss it now serves exclusively as domestic dwellings but the park is public.

There are several festivals in Offebach, some of these are:

Notable people born in Offenbach include: 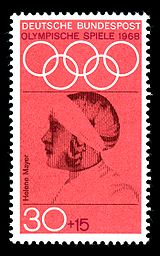 Others who have resided in Offenbach include: 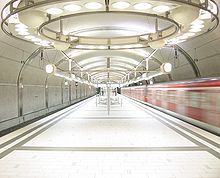 The streets of central Offenbach are usually congested with cars during the rush hour. Some areas, especially around the shopping streets, are pedestrian-only streets. There are numerous car parks located throughout the city. The Offenbacher Kreuz is an Autobahn interchange where the Autobahnen A 3 (Cologne-Würzburg) and A 661 meet. The A661 crosses the (Cologne-Würzburg) and A 5 (Basel-Hannover).

The city is connected by a mayor line of the S-Bahn railway system to Frankfurt. The station in the city center is Marktplatz. The station Kaiserlei could be used from Frankfurt and Offenbach with the same price. In general, six stations are located in Offenbach: Offenbach-Kaiserlei, Offenbach-Ledermuseum, Offenbach-Marktplatz, Offenbach-Ost, Offenbach-Bieber, Offenbach-Waldhof. The city´s public transportation services OVB and NIO connect all city districts to downtown by bus lines. Information about the public transport can be found on the RMV website Since the construction of the S-Bahn, the central train station, the Offenbach Hauptbahnhof, is no longer considered important.

The city is accessed from around the world via the Frankfurt Airport, (Flughafen Frankfurt am Main) which is located 12 km (7 mi) from Offenbach. The airport can be reached by car or bus and has two train stations, one for regional and one for long-distance traffic. The S-Bahn lines S8 and S9 (direction "Offenbach Ost or "Hanau"), departing from the regional traffic station, take 15 minutes from the airport to get to Offenbach.

In the summer, seasonal bicycles could be rented from nextbike, a rental company in Offenbach and Frankfurt. Only a credit card and a mobile phone is necessary to take a bike parked somewhere in the town. 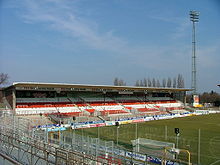