Solingen is a city in North Rhine-Westphalia, Germany. It is located on the northern edge of the region called Bergisches Land, south of the Ruhr area, and with a 2009 population[2] of 161,366 is the second largest city in the Bergisches Land. It is a member of the regional authority of the Rhineland.

Solingen is called the "City of Blades", since it has long been renowned for the manufacturing of fine swords, knives, scissors and razors made by famous firms such as DOVO Solingen, Wüsthof, J. A. Henckels, Böker, Hen & Rooster, Eickhorn-Solingen, and numerous other manufacturers. Wilkinson is also based here. Compare with Sheffield and Birmingham in England.

In Medieval times, the swordsmiths of Solingen coined the town's image, which is preserved to this date. In the latter part of the 17th century, a group of swordsmiths from Solingen broke their guild oaths by taking their sword-making secrets with them to Shotley Bridge, County Durham in England. Some 90% of German knives are produced in Solingen.

Solingen lies southwest of Wuppertal in the Bergisches Land. The city has an area of 89.45 square kilometres (34.54 sq mi), of which roughly 50% is used for agriculture, horticulture, or forestry. The city's border is 62 kilometres (39 mi) long, and the city's dimensions are 15.6 kilometres (9.7 mi) east to west and 11.7 kilometres (7.3 mi) north to south. The Wupper river, a right tributary the Rhine, flows through the city for 26 kilometres (16 mi). The city's highest point at 276 metres (906 ft) is in the northern borough of Gräfrath at the Light Tower, previously the water tower, and the lowest point at 53 metres (174 ft) is in the southwest.

The following cities and communities share a border with Solingen, starting in the northeast and going clockwise around the city:

Solingen currently consists of five boroughs. Each borough has a municipal council of either 13 or 15 representatives (Bezirksvertreter) elected every five years by the borough's population. The municipal councils are responsible for many of the boroughs' important administrative affairs.

Solingen was first mentioned in 1067 by a chronicler who called the area "Solonchon". Early variations of the name included "Solengen", "Solungen", and "Soleggen", although the modern name seems to have been in use since the late 14th and early 15th centuries. 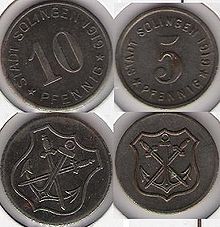 Coins issued after World War I by the City of Solingen

Blacksmith smelters, dating back to over 2000 years, have been found around the town adding to Solingen's fame as a Northern Europe blacksmith centre. Swords from Solingen have turned up in places such as the Anglo-Saxon kingdoms in the British Isles. Northern Europe prized the quality of Solingen's manufactured weaponry, and they were traded across the European continent. Solingen today remains the knife-centre of Germany.

It was a tiny village for centuries, but became a fortified town in the 15th century. In World War II the Old Town was completely destroyed by an air raid in 1944 and 1,040 people died, so there are few sights in the centre.

In 1929 Ohligs, located in the Prussian Rhine Province, 17 miles (27 km) by rail north of Cologne became part of Solingen. Its chief manufactures were cutlery and hardware, and there were iron-foundries and flour mills. Other industries are brewing, dyeing, weaving and brick-making. Before 1891 it was known as Merscheid.

More recently, the city became well-known because of a May 29, 1993 arson incident in which two women and three girls died in a fire attack on the house of a Turkish family in Solingen. Seven more people were severely injured. The fire was started by local followers of Neo-Nazism. The incident ignited further controversy when the German Chancellor, Helmut Kohl, refused to attend the funeral for the Solingen victims.

The following chart shows the population figures within Solingen's city limits at the respective points in time. The figures are derived from census estimates or numbers provided by statistical offices or city agencies, with the exception of figures preceding 1843, which were gathered using inconsistent recording techniques.

Solingen Hauptbahnhof is served by Rhine-Ruhr S-Bahn line S1 from Düsseldorf. RegionalBahn service Der Müngstener (RB 47) links Solingen (including the station nearest the town centre, Solingen Mitte, and Solingen Grünewald) to Wuppertal via Hauptbahnhof, Lennep and Ronsdorf. The Rhein-Wupper-Bahn (RB 48) runs over the Gruiten–Cologne-Deutz line to Cologne via Opladen. 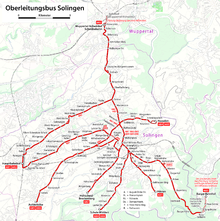 [3]
Solingen has a Trolleybus network, one of only three in Germany remaining. The network centres on Graf-Wilhelm-Platz (Count William Place).

The first trolleybus was brought into service on 19 June 1952. The network was a conversion of the previous tram services. Conversion from tramway was completed on 2 December 1959. Extensions to the system were opened in 1981-2 – Schlagbaum to Haßelstraße (2.6 kilometres (1.6 mi)) and Höscheid to Brockenburg (0.8 kilometres (0.50 mi)) respectively – and in 1993 from Aufderhöhe to Mangenberg/Graf-Wilhem-Platz (8.2 kilometres (5.1 mi)).

As of 2007[update], 6 lines are in operation. The older lines (681–684) are served every ten minutes, and the newer lines (685–686, opened 22 August 1993) run every half hour, although they are duplicated by each other for the majority of their route. Routes 681 and 682 interchange with the city's principal railway station – Solingen Hbf – which lies in the western suburbs. Line 683 – at 14.5 kilometres (9.0 mi), by far the network's longest – also connects to the Wuppertal Schwebebahn at Vohwinkel, the northern end of the route and the western terminus of the Schwebebahn. The southern extent of 683 is the picturesque town of Burg an der Wupper, which contains Schloss Burg (Burg Castle). Burg is also home to the world's only trolleybus turntable, owing to lack of space to provide a full turning circle. This precludes the use of articulated vehicles like on the rest of the network. Until november 2009 this turntable was in regular use for line 683. Since november 2009 line 683 has been extended to Burger Bahnhof. On the new section, the buses use their dieselmotor instead of the electricity, becauses no overhead wires were constructed here.

The mid 1990s saw plans to replace the trolleybuses with diesel buses, but this was never pursued; trolleybuses being preferred over diesel vehicles because of superior acceleration and better suitability for the hilly terrain. Line 683 may, however, be extended from Burg an der Wupper using dual-system buses. This may avoid the need for the turntable at Burg.

Solingen has belonged from its beginnings to the Roman Catholic Archdiocese of Cologne (Erzbistum Köln), and more specifically to the Archdeaconry of the Probst (provost) of St. Kunibert, the deanery of Deutz. Although the Protestant Reformation gradually made gains in the city, which was under the control of the Counts of Berg, the population by and large remained Catholic. The Catholic community was newly endowed by the local lord in 1658 and in 1701 received a new church building. In 1827 Solingen became the seat of its own deanery within the newly defined Archdiocese of Cologne, to which the city's current parishes still belong.

As mentioned, the Reformation only gradually gained a foothold in Solingen. A reformed church affiliated with the Bergisch synod was established in 1590, and the city's parish church became reformed in 1649. Lutherans had been present in Solingen since the beginning of the 17th century, and a Lutheran congregation was founded in 1635. In 1672 a formalized religious agreement was reached between the city's religious groups. The Reformation was also introduced in Gräfrath in 1590, where a church council was apparently established in 1629. The Reformed and Lutheran churches were formed into a united church community in 1838 following the general merger of Reformed and Lutheran churches in Prussia in 1817.

The Protestant parishes originally belonged to the district synod of Lennep, today part of the city Remscheid. A new synod was established in Solingen in 1843, and the city acquired its own superintendent, a form of church administrator. This formed the basis for the present-day Church District of Solingen, a member of the Evangelical Church in the Rhineland. With the exception of the free churches, most Protestant churches belong to the Church District of Solingen. 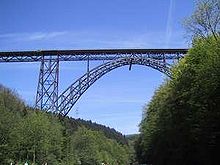 Müngstener Brücke, a railroad bridge between Solingen and Remscheid.

Locations of note in the city include:

The founders of Studebaker Brothers Manufacturing Company, which later became the automobile company Studebaker, trace their lineage to bladesmen from the region that migrated to America in 1736.