listen) is a city in Germany. It is located in the Bundesland of North Rhine-Westphalia, in the Ruhr area. Its population of 585,045 (in December 2006) makes it the 7th largest city in Germany and the 34th largest in the European Union.

The river Ruhr flows south of the city, and the small river Emscher flows through the municipal area. The Dortmund-Ems Canal also terminates in the Dortmund Port, which is the largest European canal port, and links Dortmund to the North Sea.

Dortmund is known as Westphalia's "green metropolis." Nearly half the municipal territory consists of waterways, woodland, agriculture and green spaces with spacious parks such as Westfalenpark and the Rombergpark. This contrasts with nearly a hundred years of extensive coal mining and steel milling within the city limits.

A small village at the location of Dortmund was mentioned in official documents from 880 to 885 as Throtmanni. After it was destroyed by a fire, the Holy Roman Emperor Frederick I (Barbarossa) had the town rebuilt in 1152 and resided there for two years. It became an Imperial Free City in 1220. During that century, it was the "chief city" of the Rhine, Westphalia, the Netherlands Circle of the Hanseatic League.

After 1320, the city appeared in writing as "Dorpmunde", and the 1661 earthquake collapsed the Reinoldikirche. Within the Prussian Province of Westphalia, Dortmund was a district seat within Regierungsbezirk Arnsberg until 1875, after which it was an urban district within the region. During the industrialization of Prussia, Dortmund became a major centre for coal and steel.

Under Nazi Germany, the synagogue was destroyed in 1938. Also, the Aplerbeck Hospital in Dortmund transferred mentally and/or physically disabled patients for euthanasia at the Hadamar mental hospital as part of the Action T4 (an additional 229 children were killed in the "Children's Specialist Department", which was transferred from Marburg in 1941). Dortmund bombing targets of the Oil Campaign of World War II included Hoesch-Westfalenhütte AG, the "Hoesch-Benzin GmBH" synthetic oil plant, and the Zeche Hansa coking plant;[2] and bombing destroyed about 66 % of the Dortmund homes[3] and about 98 % of the inner city area. The code word Dortmund was radioed to initiate the 1941 Operation Barbarossa campaign against the Soviet Union.

The Allied ground advance into Germany reached Dortmund in April 1945. The US 95th Infantry Division, attacked the city on 12 April 1945 against a spirited German defense. The division, assisted by close air support, advanced through the ruins in urban combat and completed its capture on 13 April 1945.[4]

Post-war, buildings such as the Reinoldikirche and Marienkirche (churches) were restored/rebuilt, and extensive parks and gardens were laid out. The LWL-Industriemuseum began in 1969,[5] and the city subsequently became a centre for hi-tech industry.

Cultural history tones are set by the churches in the city centre whose towers characterise the skyline of Dortmund. The Reinoldikirche and the Marienkirche are gems of medieval architecture.

The city centre of Dortmund still retains the outline of the medieval city. A ring road marks the former city wall, and the Westen-/Ostenhellweg, part of a medieval salt trading route, is still the major (pedestrian) street bisecting the city centre. 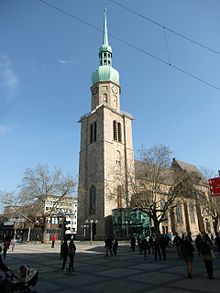 Signal Iduna Park is the biggest stadium in Germany

Dortmund is home of the sport club Borussia Dortmund which won the UEFA Champions League and the Intercontinental Cup in 1997, as well as the UEFA Cup Winners' Cup against Liverpool in 1966. This made it the first European Cup Winner in Germany. They play at Westfalenstadion, currently known as Signal Iduna Park. It was built for the 1974 FIFA Football World Cup and also hosted some matches of 2006 FIFA World Cup, including Italy's 2-0 defeat of Germany in the semi-finals. It is Germany's largest football stadium with a maximum capacity of 80,720 spectators.[6]
Borussia Dortmund also has a women's handball team playing in the first Bundesliga, while the table tennis team and the basketball team SVD 49 Dortmund play their respective second national divisions.

Dortmund is the Olympiastützpunkt for Westphalia.

The Sparkassen Chess-Meeting has been hosted in Dortmund since 1982. 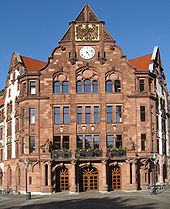 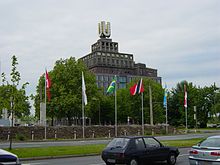 Dortmund Airport is a medium-sized, but fast growing airport 13 km (8.1 mi) east of the city centre at the city limit to Holzwickede.[7] The closest intercontinental airport is Düsseldorf International Airport.

Dortmund also serves as a major European and German crossroads for the Autobahnsystem. The Ruhrschnellweg follows old Hanseatic trade routes to connect the city with the other metropolises of the Ruhr Area. Connections to the more distant parts of Germany are maintained by the A1 and the A2 which pass closely to the north and east of the city and cross each other at the Kamener Kreuz interchange northeast of Dortmund. Together with the A45 in the west they built the Dortmund Beltway (Dortmunder Autobahnring).

For public transportation, the city has an extensive Stadtbahn and bus system. In April 2008, the newly constructed east-west underground light rail line was opened, completing the underground service in the city centre and replacing the last trams on the surface.[8]

The H-Bahn at Dortmund University of Technology is a hanging monorail built specifically to shuttle passengers between the university's two campuses,[9] which are now also flanked by research laboratories and other high-tech corporations and startups. A nearly identical monorail system transfers passengers at Düsseldorf Airport.[10]

Dortmund has historically been an industrial area. Dortmund is now home to a number of medium-sized information technology companies,[12] many linked to the local university TechnologieZentrumDortmund program.[13] The city works closely with research institutes, private universities, and companies to collaborate on the commercialization of science initiatives.[14]

In 2009, Dortmund was classified as a Node city in the Innovation Cities Index published by 2thinknow.[15]

The politics of Dortmund are dominated by the social-democratic SPD. Since World War II, the SPD has been the biggest party on the town council (German: Stadtrat). Since the 2004 local election, there have been 9 parties and electors' groups on the town council (88 seats; 1999: 82 seats):

Since May 2010, the lord mayor of Dortmund is Ullrich Sierau (SPD). He leads a coalition made up of SPD and Grüne. 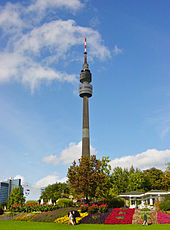 The city has a long tradition of music and theatre. The orchestra was founded in 1887 and is now called Dortmunder Philharmoniker. The first opera house was built in 1904, destroyed in World War II and opened again in 1966 as Opernhaus Dortmund. It is operated by Theater Dortmund together with other locations, including (since 2002) the Konzerthaus Dortmund. The city is namesake for the Dortmunder style beer and is home to the Dortmunder Actien Brauerei.

Dortmund is twinned with:[16]