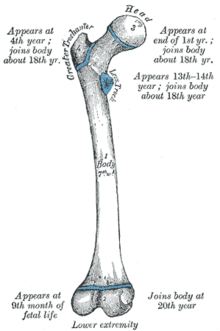 Drawing of a human femur

Bones are rigid organs that constitute part of the endoskeleton of vertebrates. They support, and protect the various organs of the body, produce red and white blood cells and store minerals. Bone tissue is a type of dense connective tissue. Bones come in a variety of shapes and have a complex internal and external structure, are lightweight yet strong and hard, and serve multiple functions. One of the types of tissue that makes up bone is the mineralized osseous tissue, also called bone tissue, that gives it rigidity and a honeycomb-like three-dimensional internal structure. Other types of tissue found in bones include marrow, endosteum and periosteum, nerves, blood vessels and cartilage. At birth, there are over 270 bones in an infant human's body,[1] but many of these fuse together as the child grows, leaving a total of 206 separate bones in an adult. The largest bone in the human body is the femur and the smallest bones are auditory ossicles.[2]

The primary tissue of bone, osseous tissue, is a relatively hard and lightweight composite material, formed mostly of calcium phosphate in the chemical arrangement termed calcium hydroxylapatite (this is the osseous tissue that gives bones their rigidity). It has relatively high compressive strength, of about 170 MPa (1800 kgf/cm²)[4] but poor tensile strength of 104–121 MPa and very low shear stress strength (51.6 MPa),[5] meaning it resists pushing forces well, but not pulling or torsional forces. While bone is essentially brittle, it does have a significant degree of elasticity, contributed chiefly by collagen. All bones consist of living and dead cells embedded in the mineralized organic matrix that makes up the osseous tissue. 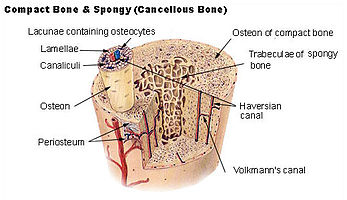 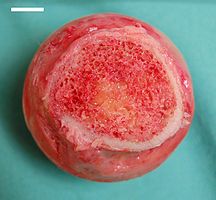 Bone is not a uniformly solid material, but rather has some spaces between its hard elements.

The hard outer layer of bones is composed of compact bone tissue, so-called due to its minimal gaps and spaces. Its porosity is 5–30%.[6] This tissue gives bones their smooth, white, and solid appearance, and accounts for 80% of the total bone mass of an adult skeleton. Compact bone may also be referred to as dense bone.

Filling the interior of the bone is the trabecular bone tissue (an open cell porous network also called cancellous or spongy bone), which is composed of a network of rod- and plate-like elements that make the overall organ lighter and allow room for blood vessels and marrow. Trabecular bone accounts for the remaining 20% of total bone mass but has nearly ten times the surface area of compact bone. Its porosity is 30–90%.[6] If, for any reason, there is an alteration in the strain the cancellous is subjected to, there is a rearrangement of the trabeculae. The microscopic difference between compact and cancellous bone is that compact bone consists of haversian sites and osteons, while cancellous bones do not. Also, bone surrounds blood in the compact bone, while blood surrounds bone in the cancellous bone.

There are several types of cells constituting the bone;

The majority of bone is made of the bone matrix. It has inorganic and organic parts. Bone is formed by the hardening of this matrix entrapping the cells. When these cells become entrapped from osteoblasts they become osteocytes. 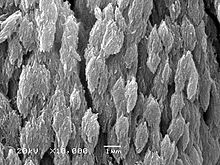 The inorganic composition of bone (bone mineral) is formed from carbonated hydroxyapatite [7][8] (Ca10(PO4)6(OH)2) with lower crystallinity.[7][9] The matrix is initially laid down as unmineralised osteoid (manufactured by osteoblasts). Mineralisation involves osteoblasts secreting vesicles containing alkaline phosphatase. This cleaves the phosphate groups and acts as the foci for calcium and phosphate deposition. The vesicles then rupture and act as a centre for crystals to grow on. More particularly, bone mineral is formed from globular and plate structures,[9][10] distributed among the collagen fibrils of bone and forming yet larger structure.

The organic part of matrix is mainly composed of Type I collagen. This is synthesised intracellularly as tropocollagen and then exported, forming fibrils. The organic part is also composed of various growth factors, the functions of which are not fully known. Factors present include glycosaminoglycans, osteocalcin, osteonectin, bone sialo protein, osteopontin and Cell Attachment Factor. One of the main things that distinguishes the matrix of a bone from that of another cell is that the matrix in bone is hard. 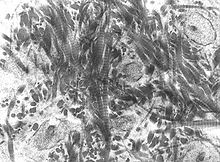 Two types of bone can be identified microscopically according to the pattern of collagen forming the osteoid (collagenous support tissue of type I collagen embedded in glycosaminoglycan gel):

Woven bone is produced when osteoblasts produce osteoid rapidly, which occurs initially in all fetal bones (but is later replaced by more resilient lamellar bone). In adults woven bone is created after fractures or in Paget's disease. Woven bone is weaker, with a smaller number of randomly oriented collagen fibers, but forms quickly; it is for this appearance of the fibrous matrix that the bone is termed woven. It is soon replaced by lamellar bone, which is highly organized in concentric sheets with a much lower proportion of osteocytes to surrounding tissue. Lamellar bone, which makes its first appearance in the fetus during the third trimester,[11] is stronger and filled with many collagen fibers parallel to other fibers in the same layer (these parallel columns are called osteons). In cross-section, the fibers run in opposite directions in alternating layers, much like in plywood, assisting in the bone's ability to resist torsion forces. After a fracture, woven bone forms initially and is gradually replaced by lamellar bone during a process known as "bony substitution." Compared to woven bone, lamellar bone formation takes place more slowly. The orderly deposition of collagen fibers restricts the formation of osteoid to about 1 to 2 µm per day. Lamellar bone also requires a relatively flat surface to lay the collagen fibers in parallel or concentric layers.

These terms are histologic, in that a microscope is necessary to differentiate between the two. 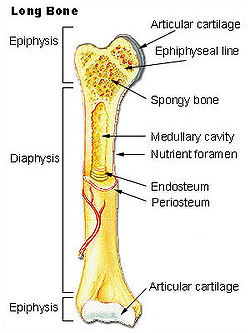 There are five types of bones in the human body: long, short, flat, irregular, and sesamoid.

The formation of bone during the fetal stage of development occurs by two processes: Intramembranous ossification and endochondral ossification. 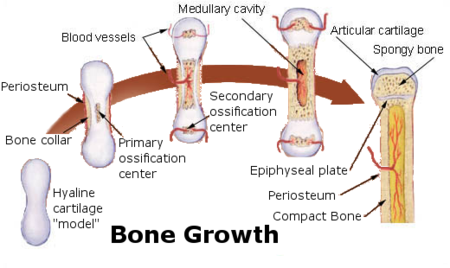 Endochondral ossification begins with points in the cartilage called "primary ossification centers." They mostly appear during fetal development, though a few short bones begin their primary ossification after birth. They are responsible for the formation of the diaphyses of long bones, short bones and certain parts of irregular bones. Secondary ossification occurs after birth, and forms the epiphyses of long bones and the extremities of irregular and flat bones. The diaphysis and both epiphyses of a long bone are separated by a growing zone of cartilage (the epiphyseal plate). When the child reaches skeletal maturity (18 to 25 years of age), all of the cartilage is replaced by bone, fusing the diaphysis and both epiphyses together (epiphyseal closure).

Bone marrow can be found in almost any bone that holds cancellous tissue. In newborns, all such bones are filled exclusively with red marrow, but as the child ages it is mostly replaced by yellow, or fatty marrow. In adults, red marrow is mostly found in the marrow bones of the femur, the ribs, the vertebrae and pelvic bones.

Remodeling or bone turnover is the process of resorption followed by replacement of bone with little change in shape and occurs throughout a person's life. Osteoblasts and osteoclasts, coupled together via paracrine cell signalling, are referred to as bone remodeling units.

The purpose of remodeling is to regulate calcium homeostasis, repair micro-damaged bones (from everyday stress) but also to shape and sculpture the skeleton during growth.

Repeated stress, such as weight-bearing exercise or bone healing, results in the bone thickening at the points of maximum stress (Wolff's law). It has been hypothesized that this is a result of bone's piezoelectric properties, which cause bone to generate small electrical potentials under stress.[12]

The action of osteoblasts and osteoclasts are controlled by a number of chemical factors that either promote or inhibit the activity of the bone remodeling cells, controlling the rate at which bone is made, destroyed, or changed in shape. The cells also use paracrine signalling to control the activity of each other.

Osteoblasts can be stimulated to increase bone mass through increased secretion of osteoid and by inhibiting the ability of osteoclasts to break down osseous tissue.

The rate at which osteoclasts resorb bone is inhibited by calcitonin and osteoprotegerin. Calcitonin is produced by parafollicular cells in the thyroid gland, and can bind to receptors on osteoclasts to directly inhibit osteoclast activity. Osteoprotegerin is secreted by osteoblasts and is able to bind RANK-L, inhibiting osteoclast stimulation.[13]

There are many disorders of the skeleton. One of the more prominent is osteoporosis.

Osteoporosis is a disease of bone, leading to an increased risk of fracture. In osteoporosis, the bone mineral density (BMD) is reduced, bone microarchitecture is disrupted, and the amount and variety of non-collagenous proteins in bone is altered. Osteoporosis is defined by the World Health Organization (WHO) in women as a bone mineral density 2.5 standard deviations below peak bone mass (20-year-old sex-matched healthy person average) as measured by DEXA; the term "established osteoporosis" includes the presence of a fragility fracture.[14] Osteoporosis is most common in women after the menopause, when it is called postmenopausal osteoporosis, but may develop in men and premenopausal women in the presence of particular hormonal disorders and other chronic diseases or as a result of smoking and medications, specifically glucocorticoids, when the disease is called steroid- or glucocorticoid-induced osteoporosis (SIOP or GIOP).

Osteoporosis can be prevented with lifestyle advice and medication, and preventing falls in people with known or suspected osteoporosis is an established way to prevent fractures. Osteoporosis can be treated with bisphosphonates and various other medical treatments.

Other disorders of bone include:

The study of bones and teeth is referred to as osteology. It is frequently used in anthropology, archeology and forensic science for a variety of tasks. This can include determining the nutritional, health, age or injury status of the individual the bones were taken from. Preparing fleshed bones for these types of studies can involve maceration – boiling fleshed bones to remove large particles, then hand-cleaning.

Typically anthropologists and archeologists study bone tools made by Homo sapiens and Homo neanderthalensis. Bones can serve a number of uses such as projectile points or artistic pigments, and can be made from endoskeletal or external bones such as antler or tusk.

There are several evolutionary alternatives to mammillary bone; though they have some similar functions, they are not completely functionally analogous to bone.

Bone penetrating the skin and being exposed to the outside can be both a natural process in some animals, and due to injury:

Several terms are used to refer to features and components of bones throughout the body:

Several terms are used to refer to specific features of long bones: