The dens (also odontoid process or odontoid peg) is a protuberance (process or projection) of the axis (second cervical vertebra). It exhibits a slight constriction or neck, where it joins the main body of the vertebra. The condition, where the dens is separated from the body of the axis, is called os odontoideum, and may cause nerve and circulation compression syndrome.

On its anterior surface is an oval or nearly circular facet for articulation with that on the anterior arch of the atlas.

On the back of the neck, and frequently extending on to its lateral surfaces, is a shallow groove for the transverse atlantal ligament which retains the process in position.

The apex is pointed, and gives attachment to the apical odontoid ligament; below the apex the process is somewhat enlarged, and presents on either side a rough impression for the attachment of the alar ligament; these ligaments connect the process to the occipital bone.

The internal structure of the odontoid process is more compact than that of the body.

The odontoid peg is the ascension of the atlas fused to the ascension of the axis. The peg has an articular facet at its front and forms part of a joint with the anterior arch of the atlas. It is a non-weight bearing joint. The alar ligaments, together with the apical ligaments, are attached from the sloping upper edge of the odontoid peg to the margins of the foramen magnum. The inner ligaments limit rotation of the head and are very strong. The weak apical ligament lies in front of the upper longitudinal bone of the cruciform ligament, and joins the apex of the deltoid peg to the anterior margin of the foramen magnum. It is the fibrous remnant of the notochord. 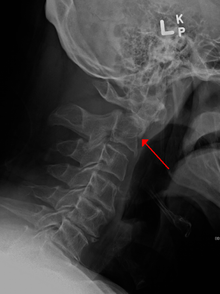 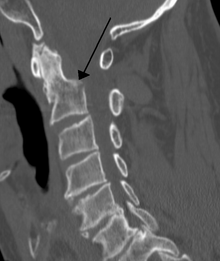 Type I Fracture - Extends through the tip of the dens. This type is usually stable.

Type II Fracture - Extends through the base of the dens. It is the most commonly encountered fracture for this region of the axis. This type is never stable.

Type III Fracture - Extends through the vertebral body of the axis. This type can be stable or unstable and may require surgery. [1]