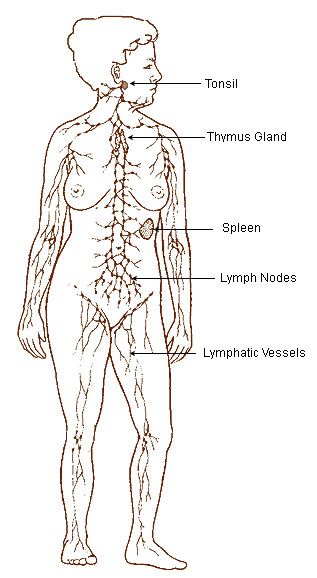 The lymphatic system in s is a network of conduits that carry a clear fluid called . It also includes the through which the lymph travels. Lymphoid tissue is found in many organs, particularly the s, and in the associated with the such as the . The system also includes all the structures dedicated to the circulation and production of s, which includes the , , and the lymphoid tissue associated with the .

The dissolved constituents of the do not directly come in contact with the cells and tissues in the body, but first enter the , and then the cells of the body. Lymph is the fluid that is formed when interstitial fluid enters the conduits of the lymphatic system. The lymph is not pumped through the body like blood, it is moved mostly by the contractions of s.

The lymphatic system has three interrelated functions. It is responsible for the removal of interstitial fluid from tissues. It absorbs and transports and s as to the circulatory system. The last function of the lymphatic system is the transport of antigen presenting cells (APCs), such as dendritic cells, to the lymph nodes where an immune response is stimulated.

The study of lymphatic drainage of various organs is important in diagnosis and treatment of cancer. The lymphatic system, because of its physical proximity to many tissues of the body, is responsible for carrying cancerous cells between the various parts of the body in a process called . The intervening lymph nodes can trap the cancer cells. If they are not successful in destroying the cancer cells the nodes may become sites of secondary tumors.

Diseases and other problems of the lymphatic system can cause swelling and other symptoms. Problems with the system can impair the body's ability to fight infections.

The lymphatic system can be broadly divided into the conducting system and the lymphoid tissue.

The conducting system carries the lymph and consists of tubular vessels that include the , the s and the right and the thoracic ducts.

supplies nutrients, and important s to the tissues, and collects back the waste products that they produce, which requires exchange of respective constituents between the blood and tissues. However, this exchange is not direct, and is effected through an intermediary called "interstitial fluid" or "tissue fluid" that the blood forms. Interstitial fluid (ISF) is the fluid that occupies the spaces between the cells and acts as their immediate environment. As the blood and the surrounding cells continually add and remove substances from the ISF, its composition keeps on changing. Water and s can freely pass (diffuse) between the ISF and blood, and thus both are in with each other; exchange between the two fluids occurs across the walls of small blood vessels called capillaries.

ISF forms at the arterial (coming from the heart) end of the capillaries because of higher pressure of blood, and "most of it" returns to its venous ends and s; the rest (10&mdash;20%) enters the lymph capillaries as lymph.

Tubular vessels transport back lymph to the blood ultimately replacing the volume lost from the blood during the formation of the interstitial fluid. These channels are the lymphatic channels or simply called "lymphatics". [cite web |url=http://www.medterms.com/script/main/art.asp?articlekey=4217 |title=Definition of lymphatics |accessdate=2008-07-06 |work=Webster's New WorldMedical Dictionary |publisher= MedicineNet.com|date= ]

The general structure of lymphatics is based on that of blood vessels. There is an inner lining of single flattened cells composed of a type of that is called , and the cells are called "endothelial cells". This layer functions to mechanically transport fluid and since the on which it rests is discontinuous, it is quite leaky.

The whole lymphatic conducting system broadly consists of two types of channels&mdash;the "initial lymphatics", the "prelymphatics" or "" that specialize in collection of the lymph from the ISF, and the larger "lymph vessels" that propel the lymph forward.

Unlike the cardiovascular system, the lymphatic system is not closed and has no central pump. Lymph movement occurs despite low pressure due to (propulsion of the lymph due to alternate contraction and relaxation of ), valves, and compression during contraction of adjacent skeletal muscle and pulsation.

The lymphatic circulation begins with blind ending (closed at one end) highly permeable superficial lymph capillaries, formed by endothelial cells with button-like junctions between them that allow fluid to pass through them when the interstitial pressure is sufficiently high.

Rhythmic contraction of the vessel walls through movements may also help draw fluid into the smallest lymphatic vessels, capillaries. If tissue fluid builds up the tissue will swell; this is called . As the circular path through the body's system continues, the fluid is then transported to progressively larger lymphatic vessels culminating in the (for lymph from the right upper body) and the (for the rest of the body); both ducts "drain" into the circulatory system at the right and left s. The system collaborates with white blood cells in lymph nodes to protect the body from being infected by cancer cells, fungi, viruses or bacteria. This is known as a secondary circulatory system.

The lymph capillaries drain the lymph to larger "contractile" lymphatics, which have valves as well as smooth muscle walls. These are called the "collecting ".

The functional unit of a lymph vessel is known as a "", which is the segment between two valves. Since it is contractile, depending upon the ratio of its length:radius, it can act either like a contractile chamber propelling the fluid ahead, or as a resistance vessel tending to stop the lymph in its place.

Lymphoid tissue associated with the lymphatic system is concerned with immune functions in defending the body against the s and spread of s. It consists of with various types of white blood cells enmeshed in it, most numerous being the s.

A lymph node is an organized collection of lymphoid tissue, through which the lymph passes on its way to returning to the blood. Lymph nodes are located at intervals along the lymphatic system. Several lymph vessels bring in lymph, which percolates through the substance of the lymph node, and is drained out by an lymph vessel.

Lymph follicles are a dense collection of lymphocytes, the number, size and configuration of which change in accordance with the functional state of the lymph node, e.g., the follicles expand significantly upon encountering a foreign antigen. The selection of B cells occurs in the germinal center of the lymph nodes.

Lymph nodes are particularly numerous in the in the chest, neck, pelvis, axilla (armpit), inguinal (groin) region, and in association with the blood vessels of the intestines.

s called are present in the lining of the , predominantly in the small intestine. While most other nutrients absorbed by the are passed on to the portal venous system to drain, via the , into the for processing, fats (lipids) are passed on to the lymphatic system, to be transported to the blood circulation via the . The enriched lymph originating in the lymphatics of the is called . As the blood circulates, fluid leaks out into the body tissues. This fluid is important because it carries food to the cells and waste back to the bloodstream. The nutrients that are released to the circulatory system are processed by the , having passed through the systemic circulation. The lymph system is a one-way system, transporting interstitial fluid back to blood.

Diseases of the lymphatic system

is the swelling caused by the accumulation of lymph fluid, [Citation
title = Lymphedema
url = http://www.merck.com/mmhe/sec03/ch037/ch037b.html] which may occur if the lymphatic system is damaged, or has malformations. It usually affects the limbs, though face, neck and abdomen may also be affected. An estimated 170 million people develop lymphedema, which progresses in three stages:
Stage 1: Pressing the swollen limb leaves a pit that takes a while to fill back in. Because there is little fibrosis (hardening) it is often reversible. Elevation reduces swelling.
Stage 2: Pressure does not leave a pit. Elevation does not help. If left untreated, the limb becomes fibrotic.
Stage 3: This stage of lymphedema is often called elephantiasis. It is generally only in the legs after lymphedema that has gone long untreated. While treatment can help a little, it is not reversible.

Some common causes of swollen lymph nodes include s, and , e.g. Hodgkin's and , and of cancerous cells via the lymphatic system.In , infection of the lymphatic vessels cause a thickening of the skin and enlargement of underlying tissues, especially in the legs and genitals. It is most commonly caused by a known as .
is a malignant soft tissue tumor (), whereas is a benign tumor occurring frequently in association with . is a benign tumor of the smooth muscles of the lymphatics that occurs in the s.

Lymphatic tissues begin to develop by the end of the fifth week of embryonic life. Lymphatic vessels develop from lymph sacs that arise from developing veins, which are derived from .

The next lymph sac to appear is the unpaired retroperitoneal lymph sac at the root of the mesentery of the intestine. It develops from the primitive vena cava and mesonephric veins. Capillary plexuses and lymphatic vessels spread form the retroperitoneal lymph sac to the abdominal viscera and diaphragm. The sac establishes connections with the cisterna chyli but loses its connections with neighboring veins.

With the exception of the anterior part of the sac from which the cisterna chyli develops, all lymph sacs become invaded by mesenchymal cells and are converted into groups of .

The develops from mesenchymal cells between layers of the dorsal mesentery of the stomach. The arises as an outgrowth of the third pharyngeal pouch.

was one of the first persons to mention the lymphatic system in fifth century BC. In his work "On Joints," he briefly mentioned the lymph nodes in one sentence. Rufus of , a Roman physician, identified the axillary, inguinal and mesenteric lymph nodes as well as the thymus during the first to second century AD.

Till the seventeenth century ideas of Galen were most prevalent. And accordingly, it was believed that the blood was produced by the liver from chyle contaminated with ailments by the intestine and stomach, to which various spirits were added by other organs, and that this blood was consumed by all the organs of the body. This theory required that the blood be consumed and produced many times over. His ideas had remained unchallenged till the seventeenth century, and even then were defended by some physicians.

In the mid 16th century (discoverer of the s) described, what are now known as the lacteals as "coursing over the intestines full of yellow matter."

The idea that blood recirculates through the body rather than being produced anew by the liver and the heart was first accepted as a result of works of &mdash;a work he published in . In , (1630–1702), a Swedishwhat discovered certain transparent vessels in the liver that contained clear fluid (and not white), and thus named them "hepatico-aqueous vessels". He also learned that they emptied into the thoracic duct, and that they had valves.