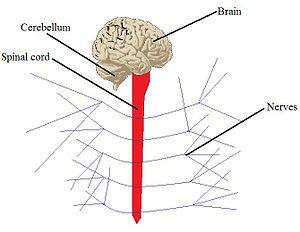 An example of a system: The nervous system. This basic diagram shows that this system is made up of 4 different basic organs: the brain, the cerebellum, the spinal cord, and the nerves.

In biology, a biological system (or organ system or body system) is a group of organs that work together to perform a certain task. Common systems, such as those present in mammals and other animals, seen in human anatomy, are those such as the circulatory system, the respiratory system, the nervous system, etc.

A group of systems composes an organism, e.g. the human body.

These specific systems are widely studied in Human anatomy. "Human" systems are also present in many other animals.