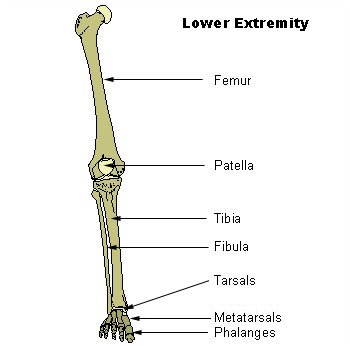 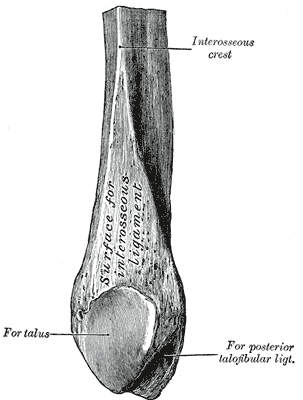 The fibula or calf bone is a located on the lateral side of the , with which it is connected above and below. It is the smaller of the two bones, and, in proportion to its length, the most slender of all the long bones. Its upper extremity is small, placed toward the back of the head of the tibia, below the level of the knee-joint, and excluded from the formation of this joint. Its lower extremity inclines a little forward, so as to be on a plane anterior to that of the upper end; it projects below the tibia, and forms the lateral part of the ankle-joint.

The bone has the following components:

The blood supply is important for planning free tissue transfer because the fibula is commonly used to reconstruct the . The shaft is supplied in its middle third by a large nutrient vessel from the peroneal artery. It is also perfused from its which receives many small branches from the peroneal artery. The proximal head and the are supplied by a branch of the anterior tibial artery. In harvesting the bone the middle third is always taken and the ends preserved (4cm proximally and 6cm distally)

The fibula is from "three" centers, one for the shaft, and one for either end. Ossification begins in the body about the eighth week of fetal life, and extends toward the extremities. At birth the ends are .

Ossification commences in the lower end in the second year, and in the upper about the fourth year. The lower , the first to ossify, unites with the body about the twentieth year; the upper epiphysis joins about the twenty-fifth year.