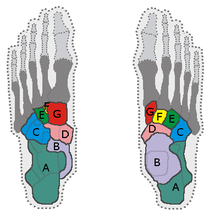 In humans the largest bone in the tarsus is the calcaneus, which is the weight-bearing bone within the heel of the foot. 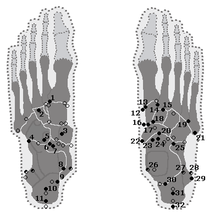 There are seven tarsal bones in the human body:

The talus bone or ankle bone is connected superiorly to the two bones of the lower leg, the tibia and fibula, to form the ankle joint or talocrural joint; inferiorly, at the subtalar joint, to the calcaneus or heel bone. Together, the talus and calcaneus form the hindfoot.[1]

The five irregular bones of the midfoot — the cuboid, navicular, and three cuneiform bones — form the arches of the foot which serves as a shock absorber. The midfoot is connected to the hind- and forefoot by muscles and the plantar fascia.[1]

The complex motion of the subtalar joint occurs in three planes and produces subtalar inversion and eversion. Along with the transverse tarsal joint (i.e. talonavicular and calcaneocuboid joint), the subtalar joint transforms tibial rotation into forefoot supination and pronation. The axis of rotation in the joint is directed upward 42 degrees from the horizontal plane and 16 degrees medially from the midline of the foot. However, together, the subtalar facets form a screw or Archimedean spiral, right-handed in the right foot, about which subtalar motion occurs. So, during subtalar inversion, the calcaneus also rotates clockwise and translates forward along the axis of the screw. Average subtalar motion is 20-30 degrees inversion and 5-10 degrees eversion. Functional motion during the gait cycle is 10-15 degrees (the heel strikes the ground in slight inversion followed by quick eversion). [2]

In primitive tetrapods, such as Trematops, the tarsus consists of three rows of bones. There are three proximal tarsals, the tibiale, intermedium, and fibulare, named for their points of articulation with the bones of the lower limb. These are followed by a second row of four bones, referred to as the centralia (singular: centrale), and then a row of five distal tarsals, each articulating with a single metatarsal. In the great majority of tetrapods, including all of those alive today, this simple pattern is modified by the loss and fusion of some of the bones.[3]

In reptiles and mammals, there are normally just two proximal tarsals, the calcaneus (equivalent to the amphibian fibulare) and the talus (probably derived from a fusion of multiple bones). In mammals, including humans, the talus forms a hinge joint with the tibia, a feature especially well developed in the artiodactyls. The calcaneus is also modified, forming a heel for the attachment of the Achilles tendon. Neither of these adaptations is found in reptiles, which have a relatively simple structure to both bones.[3]

The fifth distal tarsal disappears relatively early in evolution, with the remainder becoming the cuneiform and cuboid bones. Reptiles usually retain two centralia, while mammals typically have only one (the navicular).[3]