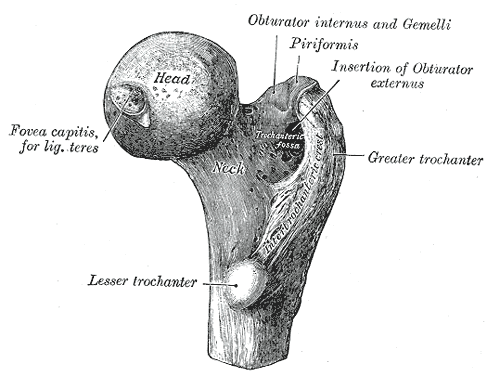 Caption = Upper extremity of right viewed from behind and above.
MusclesOrigins =
MusclesInsertions = , , ,
Articulations =
MeshName =
MeshNumber =
The greater trochanter (great trochanter) of the is a large, irregular, quadrilateral eminence.

It is directed a little lateralward and backward, and, in the adult, is about 1 cm. lower than the head. Part of the skeletal system.Because the pelvic outlet in the female is larger than in the male, there is a greater distance between the greater trochanters in the female.

It has two surfaces and four borders.

The "lateral surface", quadrilateral in form, is broad, rough, convex, and marked by a diagonal impression, which extends from the postero-superior to the antero-inferior angle, and serves for the insertion of the tendon of the .

The "superior border" is free; it is thick and irregular, and marked near the center by an impression for the insertion of the .

The "inferior border" corresponds to the line of junction of the base of the trochanter with the lateral surface of the body; it is marked by a rough, prominent, slightly curved ridge, which gives origin to the upper part of the .

The "anterior border" is prominent and somewhat irregular; it affords insertion at its lateral part to the .

The "posterior border" is very prominent and appears as a free, rounded edge, which bounds the back part of the .