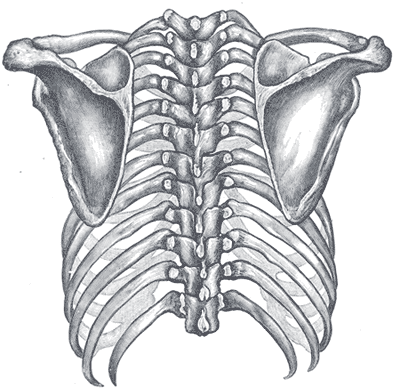 The scapula forms the posterior part of the girdle. In s, it is a flat bone, roughly triangular in shape, placed on a posterolateral aspect of the thoracic cage. Reflist

The costal or ventral surface [Fig. 1] presents a broad concavity, the "subscapular fossa".

The medial two-thirds of this fossa are marked by several oblique ridges, which run lateralward and upward. The ridges give attachment to the tendinous insertions, and the surfaces between them to the fleshy fibers, of the . The lateral third of the fossa is smooth and covered by the fibers of this muscle. The subscapular fossa is separated from the vertebral(medial) border by smooth triangular areas at the medial(Or superior) and inferior angles, and in the interval between these by a narrow ridge which is often deficient. These triangular areas and the intervening ridge afford attachment to the .

At the upper part of the fossa is a transverse depression, where the bone appears to be bent on itself along a line at right angles to and passing through the center of the , forming a considerable angle, called the ; this gives greater strength to the body of the bone by its arched form, while the summit of the arch serves to support the spine and .

The dorsal surface [Fig. 2] is arched from above downward, and is subdivided into two unequal parts by the spine; the portion above the spine is called the , and that below it the .

* The "supraspinous fossa", the smaller of the two, is concave, smooth, and broader at its vertebral than at its humeral end; its medial two-thirds give origin to the .

* The "infraspinous fossa" is much larger than the preceding; toward its vertebral margin a shallow concavity is seen at its upper part; its center presents a prominent convexity, while near the axillary border is a deep groove which runs from the upper toward the lower part. The medial two-thirds of the fossa give origin to the ; the lateral third is covered by this muscle.

The dorsal surface is marked near the axillary border by an elevated ridge, which runs from the lower part of the glenoid cavity, downward and backward to the vertebral border, about 2.5 cm above the inferior angle.

The ridge serves for the attachment of a fibrous septum, which separates the from the and .

The surface between the ridge and the axillary border is narrow in the upper two-thirds of its extent, and is crossed near its center by a groove for the passage of the scapular circumflex vessels; it affords attachment to the .

Its lower third presents a broader, somewhat triangular surface, which gives origin to the , and over which the glides; frequently the latter muscle takes origin by a few fibers from this part.

The broad and narrow portions above alluded to are separated by an oblique line, which runs from the axillary border, downward and backward, to meet the elevated ridge: to it is attached a fibrous septum which separates the muscles from each other.

There are "three" borders of the scapula:

* The superior border is the shortest and thinnest; it is concave, and extends from the to the base of the . It is referred to as the cranial border in animals.

* The (or "lateral border") is the thickest of the three. It begins above at the lower margin of the , and inclines obliquely downward and backward to the inferior angle. It is referred to as the caudal border in animals.

* The (or "medial border") is the longest of the three, and extends from the medial to the inferior angle. It is referred to as the dorsal border in animals.

There are "three" angles:
* The (or "superior angle"); craneal angle in animals.

* The ; caudal angle in animals.

* The ; distal or articullary angle in animals.

The forms the summit of the shoulder, and is a large, somewhat triangular or oblong process, flattened from behind forward, projecting at first lateralward, and then curving forward and upward, so as to overhang the glenoid cavity.

The head, processes, and the thickened parts of the bone, contain tissue; the rest consists of a thin layer of compact tissue.

The central part of the supraspinatous fossa and the upper part of the , but especially the former, are usually so thin as to be semitransparent; occasionally the bone is found wanting in this situation, and the adjacent muscles are separated only by fibrous tissue.

The following muscles attach to the scapula:

Movements of the scapula are brought about by scapular muscles:

Because of its sturdy structure and protected location, scapular fractures are uncommon; when they do occur, they are an indication that severe has occurred.

* - "Joints of the Upper Extremity: Scapula

"Additions have been made from "Nickel; Schummer; Seiferle; Lehrbuch der Anatomie der Haussäugetiere."