The lunate bone (semilunar bone) is a carpal bone (wrist bone) in the human hand that may be distinguished by its deep concavity and crescentic outline. It is situated in the center of the proximal row of the carpus (wrist) region between the fore arm and hand (manus). In standard medical posture, the lunate carpal bone is situated between the lateral Scaphoid bone and medial Triquetral bone. The lunate carpal bone straddles distally the bordering ulna and radius bones and proximally to distal carpus (wrist) Trapezium bone and Trapezoid bone.

The etymology of the Lunate bone derives from the Latin luna which means "moon", the lunate bone looks semi-similar to a crescent moon. In amphibians and reptiles, the bone is instead referred to as the intermedium, because of its position between the other two proximal carpals.

The superior surface, convex and smooth, articulates with the radius.

The inferior surface is deeply concave, and of greater extent from before backward than transversely: it articulates with the head of the capitate, and, by a long, narrow facet (separated by a ridge from the general surface), with the hamate.

The dorsal and palmar surfaces are rough, for the attachment of ligaments, the former being the broader, and of a somewhat rounded form.

The lateral surface presents a narrow, flattened, semilunar facet for articulation with the scaphoid.

The medial surface is marked by a smooth, quadrilateral facet, for articulation with the triangular bone. 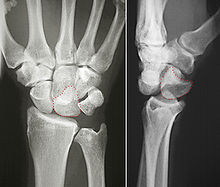 Perilunar dislocation as seen on x-ray.

The lunate bone is the most frequently dislocated carpal bone.