The hip bone, innominate bone or coxal bone is a large, flattened, irregularly shaped bone, constricted in the center and expanded above and below. It has one of the few ball and socket synovial joints in the body, the hip joint.

It meets its fellow on the opposite side in the middle line in front, and together they form the sides and anterior wall of the pelvic cavity.

Together with the sacrum and coccyx, the hip bone comprises the skeletal component of the pelvis.

It consists of three parts, the ilium, ischium, and pubis, which are distinct from each other in the young subject, but are fused in the adult; the union of the three parts takes place in and around a large cup-shaped articular cavity, the acetabulum, which is situated near the middle of the outer surface of the bone.

Each os coxa of an adult pelvic girdle is formed by the fusion of the ilium, ischium, and pubis. The pelvic girdle consists of two ossa coxae (os, bone + coxa, hip;singular). At birth, these three component bones are separated by hyaline cartilage. The fusion is usually complete by age 25.***

The hip bone first appears in fishes, where it consists of a simple, usually triangular bone, to which the pelvic fin articulates. The hip bones on each side usually connect with each other at the forward end, and are even solidly fused in lungfishes and sharks, but they never attach to the vertebral column.[1]

In the early tetrapods, this early hip bone evolved to become the ischium and pubis, while the ilium formed as a new structure, initially somewhat rod-like in form, but soon adding a larger bony blade. The acetabulum is already present at the point where the three bones meet. In these early forms, the connection with the vertebral column is not complete, with a small pair of ribs connecting the two structures; nonetheless the pelvis already forms the complete ring found in most subsequent forms.[1]

In practice, modern amphibians and reptiles have substantially modified this ancestral structure, based on their varied forms and lifestyles. The obturator foramen is generally very small in such animals, although most reptiles do possess a large gap between the pubis and ischium, referred to as the thyroid fenestra, which presents a similar appearance to the obturator foramen in mammals. In birds, the pubic symphysis is present only in the ostrich, and the two hip bones are usually widely separated, making it easier to lay large eggs.[1] 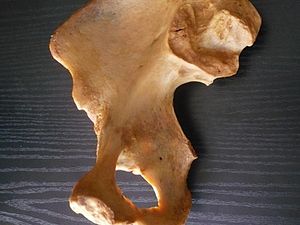 In therapsids, the hip bone came to rotate counter-clockwise, relatives to its position in reptiles, so that the ilium moved forward, and the pubis and ischium moved to the rear. The same pattern is seen in all modern mammals, and the thyroid fenestra and obturator foramen have merged to form a single space. The ilium is typically narrow and triangular in mammals, but is much larger in ungulates and humans, in which it anchors powerful gluteal muscles. Monotremes and marsupials also possess a fourth pair of bones, the prepubes or "marsupial bones", which extend forward from the pubes, and help to support the abdominal muscles and, in marsupials, the pouch. In placentral mammals, the pelvis as a whole is generally wider in females than in males, to allow for the birth of the young.[1]

Fractures of the hip bone are termed pelvic fractures, and should not be confused with hip fractures, which are actually femoral fracture[2] that occur in the proximal end of the femur.