In anatomy, the atlas (C1) is the most superior (first) cervical vertebra of the spine.

It is named for the Atlas of mythology, because it supports the globe of the head. 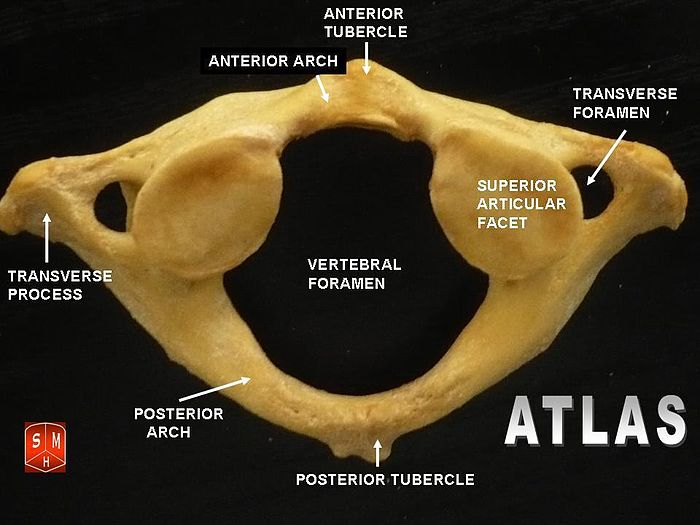 The atlas is the topmost vertebra, and – along with the Axis – forms the joint connecting the skull and spine. The atlas and axis are specialized to allow a greater range of motion than normal vertebrae. They are responsible for the nodding and rotation movements of the head.

The atlanto-occipital joint allows the head to nod up and down on the vertebral column. The dens acts as a pivot that allows the atlas and attached head to rotate on the axis, side to side.

The Atlas' chief peculiarity is that it has no body, it is ring-like, and consists of an anterior and a posterior arch and two lateral masses.

The Atlas and Axis are important neurologically because the brain stem extends down to the Axis.

The anterior arch forms about one-fifth of the ring: its anterior surface is convex, and presents at its center the anterior tubercle for the attachment of the Longus colli muscles and the anterior longitudinal ligament; posteriorly it is concave, and marked by a smooth, oval or circular facet (fovea dentis), for articulation with the odontoid process (dens) of the axis. 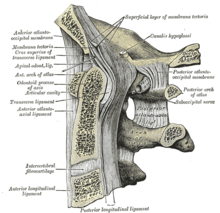 The posterior arch forms about two-fifths of the circumference of the ring: it ends behind in the posterior tubercle, which is the rudiment of a spinous process and gives origin to the Recti capitis posteriores minores and the ligamentum nuchae. The diminutive size of this process prevents any interference with the movements between the atlas and the skull.

This groove represents the superior vertebral notch, and serves for the transmission of the vertebral artery, which, after ascending through the foramen in the transverse process, winds around the lateral mass in a direction backward and medially; it also transmits the suboccipital nerve (first spinal nerve). In a common anatomic variant the vertebral artery passes through an arcuate foramen.

On the under surface of the posterior arch, behind the articular facets, are two shallow grooves, the inferior vertebral notches. The lower border gives attachment to the posterior atlantoaxial ligament, which connects it with the axis.

The lateral masses are the most bulky and solid parts of the atlas, in order to support the weight of the head.

Each carries two articular facets, a superior and an inferior.

Just below the medial margin of each superior facet is a small tubercle, for the attachment of the transverse atlantal ligament which stretches across the ring of the atlas and divides the vertebral foramen into two unequal parts:

This part of the vertebral canal is of considerable size, much greater than is required for the accommodation of the spinal cord.

The transverse processes are large; they project laterally and downward from the lateral masses, and serve for the attachment of muscles which assist in rotating the head. They are long, and their anterior and posterior tubercles are fused into one mass; the foramen transversarium is directed from below, upward and backward.

The atlas ossifies from 3 centers.

The atlas is usually ossified from three centers.

Of these, one appears in each lateral mass about the seventh week of fetal life, and extends backward; at birth, these portions of bone are separated from one another behind by a narrow interval filled with cartilage.

Between the third and fourth years they unite either directly or through the medium of a separate center developed in the cartilage.

At birth, the anterior arch consists of cartilage; in this a separate center appears about the end of the first year after birth, and joins the lateral masses from the sixth to the eighth year.

The lines of union extend across the anterior portions of the superior articular facets.

Occasionally there is no separate center, the anterior arch being formed by the forward extension and ultimate junction of the two lateral masses; sometimes this arch is ossified from two centers, one on either side of the middle line.

A break in the first vertebra is referred to as a Jefferson fracture.

The pharyngeal and retropharyngeal inflammations may cause decalcification of atlas vertebra. This may lead to loosening of attachments of transverse ligament which may eventually yield. This allows the dens of axis to move and exert pressure on spinal cord causing sudden death.[citation needed]