Pennsylvania Route 611 is a major state highway in Pennsylvania, United States, running from Interstate 95 south of downtown Philadelphia north to Interstate 380 in Coolbaugh Township, Pennsylvania in The Poconos.

Within Philadelphia, PA 611 is also Broad Street (except for the five blocks just south of Cheltenham Avenue, where PA 611 bears right onto Old York Road), the main north–south street in Philadelphia and the traditional route for the annual Mummers Parade. 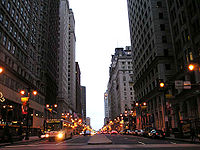 This is a southbound view of South Broad Street in Philadelphia, a part of Route 611

PA 611 begins at an interchange with I-95 at exit 17 in South Philadelphia, a section of Philadelphia. North of the I-95 interchange, PA 611 passes west of a sports complex that includes Citizens Bank Park, Lincoln Financial Field, Wachovia Center, and Wachovia Spectrum. PA 611 is the main access road to all of these arenas. North of the Sports area, PA 611 meets I-76 the Schuylkill Expressway which heads east towards the Walt Whitman Bridge into New Jersey. North of I-76, PA 611 meets streets like Moyamensing Ave, Oregon Ave, Passyunk Ave, and Snyder Ave. Near Center City, PA 611 meets South Street and Walnut Street. As PA 611 heads for Penn Square, PA 611 divides and runs around City Hall, also meeting the eastern terminus of PA 3 (Market Street) before becoming Broad Street again. In Center City, PA 611 meets Race Street which take passengers to the Convention Center. PA 611 meets I-676/US 30 the Vine Street Expressway in downtown Philadelphia. North of Center City in North Philadelphia, it goes past Temple University, as well as Spring Garden St, Cecil B. Moore, Glenwood, Lehigh, Allegheny, and Girard Ave. North of the Temple area, PA 611 meets US 13 as Roosevelt Boulevard. North of the intersection with US 13, PA 611 passes over US 1 with access to and from the southbound direction of that route. At the northern tip of Philadelphia, PA 611 becomes Old York Road and leaves Broad Street which continues north to PA 309. At the Philadelphia city line and in East Oak Lane, PA 611 meets the southern terminus of PA 309 (Cheltenham Avenue) at an interchange but neither PA 309 or PA 611 is a limited access road. 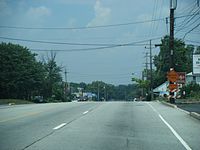 PA 611 enters Montgomery County as Old York Road after the interchange with PA 309. Old York Road is a historic road that connected Philadelphia to New York City. At the Abington Township/Cheltenham Township border, PA 611 meets PA 73 which is called Township Line Rd. In Willow Grove, PA 611 meets PA 63, also called Moreland Rd. The second junction in Willow Grove is the southern terminus of PA 263, southwest of Hatboro where PA 263 becomes York Rd. and PA 611 becomes Easton Rd. PA 611 meets I-276, the Pennsylvania Turnpike, at the Willow Grove (343) exit. In the community of Horsham, PA 611 meets the eastern terminus of PA 463. Also in Horsham, PA 611 passes east of Naval Air Station Willow Grove; the largest reserve base in the United States. PA 611 meets an important road at the Bucks - Montgomery county line, the road is called County Line Rd. and it divides the two counties. 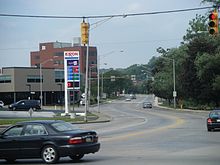 PA 611 enters Northampton County paralleling the Delaware River. In Williams Township, I-78 passes over PA 611 on the Interstate 78 Toll Bridge. In South Easton there are signs that lead passengers to I-78. After crossing the Lehigh River, PA 611 has entered downtown Easton as Larry Holmes Drive. In Easton, PA 611 meets Northampton Street which enters New Jersey on the Northampton Street Bridge. North of Northampton St, PA 611 meets the eastern terminus of PA 248 and meets U.S. Route 22 the Lehigh Valley Thruway at an interchange. PA 611 turns right on Garden Street and continues north. It turns right again and heads north, passing Lafayette College. As PA 611 exits the city of Easton, PA 611 is called Delaware Drive because PA 611 is paralleling the Delaware River. PA 611 does not have any major junctions in Forks, Lower Mount Bethel, and Washington Townships. In Upper Mount Bethel Township, PA 611 meets the northern terminus of PA 512. In Portland, PA 611 meets a road at an interchange that takes passengers into New Jersey crossing the Delaware River on the Portland-Columbia Toll Bridge. The road enters New Jersey and meets I-80, US 46, and NJ 94 at an interchange. 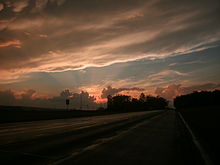 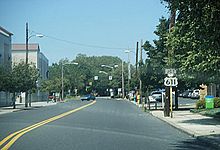 In 1970, the section of Interstate 380 between the current exit 8 and 13 opened to traffic, and the U.S. Route 611 designation was moved onto that portion of highway. The original U.S. 611 still parallels Interstate 380 approximately 200 yards to the east through Gouldsboro State Park but is now known as Coolbaugh TR 627. [2] The road is now closed to traffic. Locally, it is often known as "Old Route 611".

Until 1972, PA State Route 611 remained designated U.S. Route 611, and continued north to U.S. Route 11 in Scranton. That same year, the portion south of Tobyhanna was decommissioned to a state highway.[3]

The stretch between Gouldsboro and Elmhurst Township is now Route 435. Route 611's southern terminus had always been in Center City Philadelphia at the junction with Route 3; it was extended south to I-95 in 1987. The overhead directional signs at the south end of the PA 611 Doylestown Bypass northbound still point towards the Bypass as "U.S. 611". 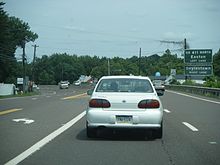 Until 1953, US 611 was exclusively in Pennsylvania. In late 1953, the Delaware Water Gap Toll Bridge and Portland-Columbia Toll Bridge were completed, as was the freeway through the Delaware Water Gap connecting them on the east (New Jersey) side of the Delaware River. The Delaware Bridge several miles south-east, which U.S. Route 46 used to cross, was abandoned at that point and later destroyed in 1955 by Hurricane Diane. The freeway had been planned as a realignment of U.S. Route 46, but instead US 611 was rerouted from its all-Pennsylvania route to cross the river twice in order to use the better-quality road on the New Jersey side. The Portland-Delaware Water Gap section of U.S. 611 became U.S. Route 611 Alternate. Route 46, therefore, no longer crossed into Pennsylvania; its western terminus became the junction with U.S. 611 at the intersection at the Portland-Columbia Toll Bridge.

North of the Portland-Columbia Bridge, the road widened from two to four lanes. Less than a mile north was a three-way intersection with only a caution light where Route 94 began and ran north. North of that intersection, Route 611 became a four-lane divided freeway and crossed the Delaware River a few miles further north on the Delaware Water Gap Toll bridge. After crossing into Pennsylvania, the divided highway narrowed again for a mile to a four lane road and curved into downtown Delaware Water Gap. There it intersected U.S. 611 Alternate and continued on to Stroudsburg. In 1959, it was announced that Interstate 80 would be designated on the freeway, and upon its completion in 1965, the road was signed as both U.S. 611 and Interstate 80. The freeway was later extended to bypass Stroudsburg, and U.S. Route 209 was realigned onto the freeway a mile past the Delaware Water Gap Bridge as well. (The old alignment of U.S. 209 was redesignated as U.S. 209 Business.)

By 1972, Interstate 80 became the exclusive route for this area of freeway, and by the end of 1973 the New Jersey portion of Interstate 80 was also complete. From 1972-73, the roads on the New Jersey side of the Delaware River were extensively realigned into a complex group of ramps. At this point, U.S. 611 was realigned to its former Pennsylvania alignment and became Pennsylvania Route 611 (due to the completion of the Interstate 380 freeway, and its terminus there 25 miles (40 km) south of U.S. 11 in Scranton). Route 94 continued to serve this new interchange, as would U.S. 46. U.S. 46 was realigned to the former U.S. 611 alignment, terminating at Interstate 80 at the new interchange. The Columbia-Portland Bridge approaches on the New Jersey side were rebuilt to feed directly into Route 94. The only U.S. 611 shield in New Jersey is located on the approach to the Columbia-Portland bridge from U.S. 46 East.