The highway replaced Pennsylvania Route 62 in the 1930s, although most spur routes of PA 62 still retain their numbers. 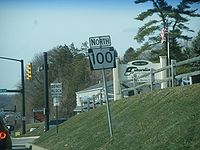 Northbound PA 100 shield in Exton, past the interchange with US 30

PA 100 begins as an expressway in West Goshen Township north of West Chester at an interchange with U.S. Route 202. Only northbound lanes of US 202 have access to PA 100, and only PA 100 southbound has access to South US 202. In 2008, this section went under a $9.9 million resurfacing project to replace the badly deteriorated original concrete surface with asphalt. In West Whiteland Township, the expressway ends when PA 100 meets its old alignment that is called Pottstown Pike that was decommissioned in 2003. It then passes under U.S. 30/Exton Bypass at an interchange in the southern portion of Exton.

Just north of the US 30 interchange in the center of Exton, PA 100 intersects U.S. 30 Business also known as Lincoln Highway. In Uwchlan Township, PA 100's next major intersection is with Pennsylvania Route 113, connecting Downingtown and Phoenixville. Less than a mile north of PA 113, PA 100 intersects Interstate 76 the Pennsylvania Turnpike at the Downingtown exit (312). In West Vincent Township, PA 100 meets PA 401 in the village of Ludwigs Corner.

The Eagle Bypass is an alternative to current Pennsylvania Route 100 through the area near Eagle, PA. Graphite Mine Road, when completed, was originally anticipated to be a new alignment to Route 100 through Eagle. In August 2009 the southern half of the road opened, finally completing the roadway through the area (the northern half had been completed and opened since June 2005). To the surprise of many in the area PA 100 has remained on its former alignment (Pottstown Pike) through the village center. Traveling Northbound on PA 100 past the Turnpike, the roadway's layout is designed to make Graphite Mine Road appear as the default straight ahead road. While signage points drivers into a left turn lane to continue on PA-100/Pottstown Pike North at the newly constructed intersection. As for the northern Pottstown Pike/Graphite Mine Rd intersection on the opposite side of town, travelers on Route 100 South find PA-100/Pottstown Pike as the straight ahead route still, although there is a text sign just before the intersection that reads, "Graphite Mine Road to PA-100 South: Keep Left." As of June 2010 it is still unclear whether PENNDOT plans to keep 100 on its current alignment or move it to the new roadway. 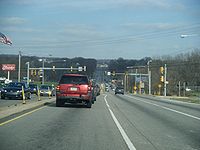 North of the PA 73 interchange, PA 100 returns to a two laned local road in Berks County. In Berks County, PA 100 passes through the towns of Bechtelsville and Bally. PA 100 becomes Main Street in Bally. In Hereford Township Just north of Bally, PA 100 begins a long concurrency with Pennsylvania Route 29 into Lehigh County.

PA 100 enters Lehigh County on a concurrency with Pennsylvania Route 29. As PA 100/PA 29 enter Lehigh County, the road is known as Chestnut Street. In Upper Milford Township marks the northern terminus of the concurrency with Pennsylvania Route 29. As of July 1, 2011, PennDOT created a truck route to bypass the sharp curves on PA 100. The truck route begins at the intersection with PA 29 and runs concurrent with it. It then turns to the west along Buckeye Road before rejoining PA 100 in Macungie.[2] Northwest of the concurrency with PA 29, PA 100 is called Kings Highway. PA 100 enters Macungie as Main Street. A mile south of Trexlertown, PA 100 becomes a newly formed 4 lane divided highway around Trexlertown called Trexlertown Bypass. The Highway was completed on 2005 and the US 222 segment was completed in 2007.

In Upper Macungie Township, PA 100 intersects U.S. Route 222 at an interchange. US 222 merges with PA 100 on the eastern segment of the highway. North of Trexlertown, PA 100 passes by an area with a lot of factories and companies like Nestle and Shop Rite. in Fogelsville, PA 100 intersect Interstate 78 and U.S. Route 22 at exits 49A-B north of the industrial area. North of the I-78 interchange, PA 100 meets Tilghman Street/Main Street the former segment of US 22. For more than 10 miles (16 km) north of the I-78 interchange, PA 100 is a two-laned local road running through many farms and rivers. In Heidelberg Township, PA 100 terminates (ends) at a "T" intersection with Pennsylvania Route 309.

Before 2003, south of Exton, PA 100 used to continue south along Pottstown Pike towards West Chester; the connector expressway (to US 202) split from it just south of Exton. Once PA 100 entered West Chester it became High Street, the main north–south artery route through the town, and it picked up a concurrency with Business U.S. 322. Several blocks north of West Chester University it turned right onto Price Street, leaving the US 322 Business concurrency picking up the beginning of PA 52. At the Brandywine Picnic Park in Pocopson it forked to the left onto Creek Road, leaving the PA 52 concurrency. It continued south winding through southern Chester and Delaware Counties following the Brandywine Creek into Delaware, with a very short wrong-way concurrency with U.S. 1/Baltimore Pike, then becoming Delaware Route 100. The alignment was changed due to local complaints about long-distance and freight traffic mistakenly traveling through West Chester via High Street to get to US 202 towards Delaware on the south side of West Chester, instead of the more appropriate path of travel along the spur to US 202 that matches the current alignment of PA 100. The old alignment of PA 100 south of Exton to the Delaware border is still driveable, although there was a slight traffic-pattern change northbound just before US 1 so that northbound traffic would have a traffic light, not a stop sign (this eliminates the northbound wrong-way concurrency with US 1 southbound).

In 2007, The Jaindl Highway (Trexlertown Bypass) opened and rerouted Route 100 onto the western loop instead of continuing on Trexlertown Road through Trexlertown.