Interstate 95 is an Interstate highway running from Miami, Florida north to Houlton, Maine. In the U.S. state of Pennsylvania, the route is known by many as the Delaware Expressway, but is officially named The Vietnam Veterans Memorial Highway.[2] and locally known as "95".[3] It runs 51 miles (82 km) from the Delaware state line near Marcus Hook to the New Jersey state line crossing the Delaware River near Yardley on the Scudder Falls Bridge. It parallels its namesake Delaware River for its entire route through the city of Philadelphia and its suburbs. It is a major route through the city and the metropolitan Delaware Valley, providing access to locally important landmarks such as Philadelphia International Airport, the Philadelphia Sports Complex, PPL Park, Penn's Landing, and Franklin Mills. Of the 15 states that Interstate 95 runs through, Pennsylvania is the only one that does not border the Atlantic Ocean.

Plans for a limited-access route along the Delaware River in the Philadelphia area originated in the 1930s when both a parkway and elevated highway were proposed; neither of these were built. The Delaware Expressway was approved in 1945 as a toll road that was to be part of the Pennsylvania Turnpike system until the project was turned to the Pennsylvania Department of Highways in 1956, with the expressway to be included in the Interstate Highway System as part of I-95. Construction on I-95 began in 1959 and was mostly complete by 1979, with the final portion near the Philadelphia International Airport finished in 1985. The route was originally projected to run through the center of Trenton, New Jersey, but was rerouted to the Scudder Falls Bridge due to limited capacity in Trenton. In March 2008, large cracks were discovered on a bridge support column in Philadelphia, requiring a two-mile section of the route to be closed for two days. Bridges are planned to be rebuilt along the section of I-95 between Center City and Woodhaven Road (Pennsylvania Route 63) and an interchange is planned to be built with the Pennsylvania Turnpike (Interstate 276) where I-95 will be rerouted to follow the Pennsylvania Turnpike to the New Jersey Turnpike and Interstate 195 will be extended along the current portion of I-95 north of the proposed interchange. 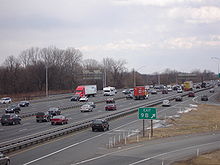 I-95 southwest of Philadelphia

Past the Schuylkill River, I-95 continues east into South Philadelphia as an elevated freeway, passing south of the Philadelphia Sports Complex and north of the Philadelphia Navy Yard, interchanging with Pennsylvania Route 611 (Broad Street). The road curves north, following the bend in the Delaware River, and runs along the waterfront, interchanging with Interstate 76 west of the Walt Whitman Bridge. The elevated roadway gradually lowers to a depressed level approaching Center City, where it passes through several short tunnels at Penn's Landing, passes under the Ben Franklin Bridge, and interchanges with the Vine Street Expressway (Interstate 676 and U.S. Route 30). North of Center City, the SEPTA Market-Frankford Line rises up from the Market Street subway into I-95's median as the highway returns to an elevated alignment, entering one station (Spring Garden) before diverging once more. I-95 continues through Northeast Philadelphia, interchanging with the Betsy Ross Bridge, Pennsylvania Route 73 at the Tacony-Palmyra Bridge, and the Woodhaven Road expressway (Pennsylvania Route 63) before crossing the county line into Bucks County.[4][5]

Plans for a limited-access highway along the Delaware River originated in 1932, as part of a proposed cars-only parkway system for the Philadelphia area similar to the contemporary system being built in New York City. However, planning for the proposed parkway system stalled and the plan was eventually abandoned. In 1937, plans for the highway were revived as the "Delaware Skyway", a planned elevated highway along the waterfront similar in design to the West Side Highway in New York, though these plans were also scrapped due to concerns that the supports would hinder access to port operations on the waterfront.[2][9] 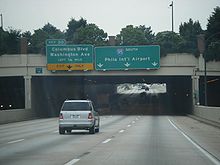 I-95 southbound through Center City Philadelphia.

In 1945, the city approved the current routing as the Delaware Expressway, envisioned to link all the industrial areas along the river with the Industrial Highway and the Trenton-Morrisville Toll Bridge to New Jersey. The planned highway was incorporated into the Pennsylvania Turnpike system, and was planned to be built as a toll road. However, with the advent of the Interstate Highway System in 1956, the project was turned over to the Pennsylvania Department of Highways and incorporated into Interstate 95. Construction on the road commenced in 1959.[2][9]

Original plans called for the expressway to follow the U.S. Route 13 corridor to the Trenton-Morrisville Toll Bridge, where I-95 would continue north along today's Trenton Freeway. However, due to limited capacity of the highway through Trenton, planners instead opted to build a new alignment bypassing Trenton to the west, incorporating the existing Scudder Falls Bridge.[2][9]

Controversy erupted in the early 1960s over the planned eight-lane elevated segment of the highway along the Center City waterfront; residents of the upscale Society Hill neighborhood objected to the highway on the grounds that it would cut off the neighborhood from the river. State highway officials reached a compromise by opting for an alternative depressed design with an overhead concrete deck connecting Center City to a planned redeveloped waterfront today known as Penn's Landing. By 1979, the entire length of the expressway was open to traffic with the exception of a four-mile (6 km) segment near Philadelphia International Airport.[2][9]

Completion of the final section of the highway faced considerable difficulty, as the road was to be built on a layer of clay separating the city's water supply from the output of its sewage treatment plant. Matters were complicated by a two-year suspension of federal highway funding while the state failed to implement a federally mandated emissions testing program. This final segment was opened to traffic in 1985, marking the completion of the 35-year project.[2][9]

On March 18, 2008, two miles (3 km) of I-95 within Philadelphia were forced to be closed when PennDOT discovered large cracks in a support column underneath the highway. In order to prevent possible collapse, I-95 was closed between Exit 23 (Girard Avenue) and Exit 25 (Allegheny Avenue). PennDOT worked quickly to stiffen the support beams to allow the road to be raised off the column, using 16 jacks, early on March 20. PennDOT reopened the road shortly thereafter, and plans to replace the cracked column.[10] 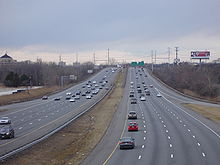 A project is currently underway to build an interchange between I-95 and the Pennsylvania Turnpike (Interstate 276) where the two highways cross but do not currently interchange with each other.[11] Following the completion of the project, the Pennsylvania Turnpike east of the interchange will be redesignated I-95 to connect with the New Jersey Turnpike portion of the route, while the current I-95 north of the interchange will become part of an extended Interstate 195.[12] The interchange between the Pennsylvania Turnpike and I-95 is to be completed in 2017.[13] In addition, PennDOT is currently rebuilding all of the I-95 bridges in Philadelphia between Cottman Avenue (PA Rt. 73) and the Benjamin Franklin Bridge, in which I-95 will have a total of eight lanes between Central Philadelphia and the Woodhaven Road (PA Rt. 63) exit. The project was planned well in advance of the I-35W Bridge Collapse and will replace bridge spans that were built in the 1960s.[14]