Route 42 is a state highway in the U.S. state of New Jersey, in the Camden area. It runs 14.28 mi (22.98 km) from an intersection with U.S. Route 322 and County Route 536 Spur in Monroe Township, Gloucester County to an intersection with Interstate 76 and Interstate 295 in Bellmawr, Camden County. The route is a mix of freeway and divided four-lane arterial road. The southern portion of Route 42 is a local arterial route and one of several highways comprising the Black Horse Pike, a road that runs from Camden to Atlantic City. The northern portion is a six- to eight-lane freeway referred to locally as the North–South Freeway (or simply the 42 Freeway[2]) that is directly connected to the Atlantic City Expressway. Major intersections along the route include the Atlantic City Expressway and the southern terminus of Route 168 in Turnersville, another intersection with Route 168 in Blackwood, and Route 41 and Route 55 in Deptford Township.

Route 42 was originally designated in 1927 to run along the Black Horse Pike between Ferry Avenue in Camden and the present U.S. Route 40/U.S. Route 322 split in the McKee City section of Hamilton Township, Atlantic County. In 1953, the southern terminus was cut back to its current terminus in the Williamstown section of Monroe Township to avoid the concurrency it shared with U.S. Route 322. After the completion of the North–South Freeway between Bellmawr and Turnersville in 1959, Route 42 was moved to this freeway, and the Black Horse Pike north of Turnersville became Route 168. The freeway portion of Route 42 has been improved many times and is projected to see more improvements, including reconstruction of the dangerous and congested interchange with Interstate 76 and Interstate 295 in Bellmawr. 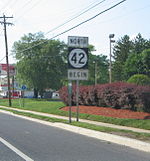 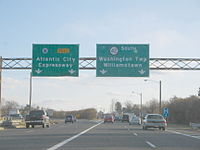 Route 42 southbound at the Atlantic City Expressway split in Turnersville

In Deptford Township, Route 41 interchanges with a northbound exit and an entrance in both directions. Past this interchange, County Route 544 interchanges with a southbound exit and an entrance in both directions.[1][3] Both of these interchanges provide access to the Deptford Mall and, in the case of the Route 41 interchange, to Route 55 from northbound Route 42 since the northbound lanes have no direct access to Route 55.[3] Route 42 meets the northern terminus of the Route 55 freeway at Exit 13 with a southbound exit and northbound entrance then widens to eight lanes.[1] Route 42 crosses the Big Timber Creek into Runnemede, Camden County, where it passes over the New Jersey Turnpike without an interchange. The freeway then enters Bellmawr, where it features right-in/right-out ramps with Leaf Avenue, that provide access to County Route 753 (Creek Road).[1] Route 42 then continues north to its terminus at Interstate 295 where the North–South Freeway becomes Interstate 76, which heads to Camden and Philadelphia .[1] 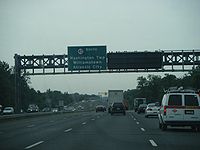 The North–South Freeway portion of Route 42 is a major route for daily commuters from southern New Jersey to Philadelphia, Pennsylvania via the Walt Whitman Bridge and Ben Franklin Bridge and weekend commuters from southeastern Pennsylvania to the southern Jersey Shore via Route 55 and the Atlantic City Expressway.[5] Route 42 sees frequent congestion on a daily basis, from the end of the Atlantic City Expressway to the I-76/I-295 interchange.[6] Even though Route 42 ends at I-295, the north–south Freeway is sometimes called "Route 42" all the way to the Interstate 76/Interstate 676 split.[7]

Snow removal, litter control, and landscaping of Route 42 between the end of the Atlantic City Expressway and Interstate 295 is performed by the South Jersey Transportation Authority.[8]

In 1927, Route 42 was legislated to run along the Black Horse Pike, a road that traces its origins back to 1855. In that year, the Camden and Blackwoodstown Turnpike Company was established by entrepreneurs who had helped create the White Horse Pike to build a gravel road that would run from Camden south to Blackwoodtown and eventually to Atlantic City,[9] from Ferry Avenue in Camden to Route 48 (now U.S. Route 40) in McKee City.[10][11] By 1941, U.S. Route 322 was assigned to follow the routing of Route 42 between Williamstown and McKee City.[12] With the 1953 New Jersey state highway renumbering, which eliminated long concurrencies between U.S. Routes and State Routes, the southern terminus of Route 42 was cut back to Williamstown to avoid the concurrency with U.S. Route 322.[13] 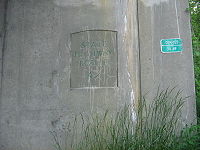 The Route 54 bridge over the Black Horse Pike (U.S. Route 322) in Folsom, showing the former Route 42 designation used before the 1953 renumbering

Following its completion, the North–South Freeway portion of Route 42 has seen many improvements. In 1965, the freeway was widened to six lanes for most of its length with the northernmost part being widened to eight lanes due to the completion of the Atlantic City Expressway and development occurring along the route. The route had its interchange with Route 55 open in 1985, when the Route 55 Freeway was opened from Route 42 to Route 41 to the south.[18] Between 1996 and August 1999, the route was widened to eight lanes between Interstate 295 and Route 55 in Deptford Township.[19] In the early 2000s, the interchanges with Route 41 and County Route 544 in Deptford were rebuilt at a cost of $13 million to improve movements within the area.[20] In October 2003, the New Jersey Department of Transportation (NJDOT) installed exit tabs along the stretch of the freeway portion of Route 42.[21] On August 27, 2010, an interchange opened at County Route 673 (College Drive), providing better access to Camden County College.[4]

NJDOT is going to build the missing movements between Interstate 295 northbound and Route 42 southbound and Route 42 northbound to Interstate 295 southbound. They will also reconstruct the dangerous and congested Route 42/Interstate 295/Interstate 76 interchange, which currently requires traffic on I-295 to use 35 mile per hour ramps that merge onto the North–South Freeway for a short distance.[22][23] In 2007, "Alternative D" for the reconstructed interchange was selected, calling for I-295 to cross over the north–south Freeway. This interchange, which will resemble two Directional-T interchanges, is projected to cost $450 million with construction taking place between 2011 and 2015. NJDOT has long term plans for 2011–2020 to reconstruct the entire Route 42 freeway from the Atlantic City Expressway to I-295.[24]

On May 12, 2009, New Jersey Governor Jon S. Corzine and the Delaware River Port Authority, the agency which manages the PATCO Speedline, announced plans to introduce express bus service along the Route 42 freeway and the adjacent Route 55 freeway as part of a comprehensive transportation plan for South Jersey[25] that would include a diesel light rail line between Camden and Glassboro, improvements to the Atlantic City Line, and enhanced connections to the Atlantic City International Airport.[26]