Route 168 is a 10.75-mile (17.30 km) state highway in the southern part of New Jersey in the United States. The route's southern terminus is an interchange with Route 42 and the Atlantic City Expressway in the Turnersville section of Washington Township, Gloucester County. The northern terminius is an intersection with County Route 603 (Ferry Avenue) on the border of Camden and Woodlynne in Camden County. At this point, the route continues toward downtown Camden as County Route 605. Route 168 follows the Black Horse Pike for most of its length, running through suburban areas in Gloucester Township, Runnemede, Bellmawr, and Mount Ephraim. It intersects many major roads, including the Route 42 freeway in Gloucester Township, Route 41 in Runnemede, the New Jersey Turnpike and Interstate 295 in Bellmawr, Route 76C (an access ramp to Interstate 76 and Interstate 676) in Haddon Township, and U.S. Route 130 in Camden.

What is now Route 168 runs along the Black Horse Pike, a turnpike established in 1855 that was to run from Camden to Atlantic City. In 1927, Route 42 was designated along this portion of road as part of its route between Camden and McKee City. In the 1940s, a freeway was proposed for Route 42 between Turnersville and the Camden area; construction began on this freeway in the 1950s. After this freeway was entirely completed in 1959, the Route 42 designation was moved to it and the former alignment of Route 42 along the Black Horse Pike north of Turnersville became Route 168.

Route 168 begins at the an interchange with west end of the Atlantic City Expressway, which feeds into Route 42 in the Turnersville section of Washington Township, Gloucester County; the North–South Freeway begins at that interchange, carrying Route 42 and through traffic from Atlantic City towards Camden.[2] Meanwhile, Route 168 continues on the old Black Horse Pike as a four-lane divided surface road, with the route officially beginning at the intersection with Hurff Lane.[1] Access from Route 168 south to Route 42 is provided via a one-way ramp continuing from the southern terminus of Route 168. However, northbound traffic from Route 42 must take the ramp to the freeway and exit immediately from the collector/distributor road onto northbound County Route 705 to access Route 168.[1][2]

From here, Route 168 continues north through commercial areas before crossing the Big Timber Creek into Gloucester Township, Camden County, where it becomes a three-lane road with a center left-turn lane and immediately intersects County Route 673, which provides access to Camden County College. The road passes through predominantly residential neighborhoods with some businesses, coming to a junction with County Route 747.[1][2] From here, the route heads into commercial parts of the Blackwood section of Gloucester Township, with some homes near the road.[2] Route 168 intersects County Route 534 in the center of Blackwood. The route leaves the Blackwood area and comes to an intersection with County Route 706. The road passes businesses past this intersection as a three-lane road with two southbound lanes and one northbound lane before coming to an interchange with Route 42.[1][2] At this interchange, there is full access between northbound Route 42 and Route 168 and between southbound Route 42 and Route 168.[2] 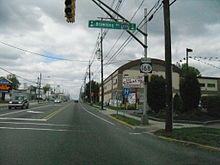 Past the Route 42 interchange, the route intersects County Route 676 and narrows to two lanes as it heads through commercial areas of Hilltop. It gains a center left-turn lane again before it enters woodland as it crosses over County Route 681 and the North Branch of the Big Timber Creek. Route 168 comes to a junction with County Route 683 and enters the Glendora section of Gloucester Township, where it heads into residential and commercial areas.[1][2] Here, the route intersects County Route 682.[1] At the intersection with County Route 544, the road crosses into Runnemede and becomes a two-lane road that continues past businesses. Route 168 crosses Route 41 and heads through the center of Runnemede, with residential areas nearby. The center-left turn lane along the route returns before it comes to a ram for the New Jersey Turnpike on the border of Runnemede and Bellmawr. Past here, Route 168 passes more businesses and crosses County Route 659.[1][2] A short distance later, the route comes to an interchange with Interstate 295, where it becomes a four-lane undivided road.[1]

The route forms the border between Mount Ephraim to the west and Haddon Heights to the east past this interchange and intersects County Route 654 and County Route 658.[1][2] At the intersection with the latter, Route 168 entirely enters Mount Ephraim and crosses County Route 551 Spur.[1] Past this intersection, the road enters a mix of residential and commercial areas and comes to a junction with County Route 660. Upon crossing Audubon Lake, Route 168 forms the border between Haddon Township to the west and Audubon to the east and becomes a divided highway again with several jughandles. It passes more businesses before crossing County Route 635, where the route runs along the border of Haddon Township and Audubon Park as a six-lane divided highway that passes through suburban areas. An interchange with Route 76C provides access to Interstate 76, Interstate 676, and the Walt Whitman Bridge to and from the southbound direction of Route 168.[1][2] Immediately past this interchange, Route 168 narrows to four lanes and intersects County Route 650, crossing the Newton Creek, where it forms the border between Camden to the west and Haddon Township to the east. Here, the route crosses U.S. Route 130 at a channelized intersection.[1] After crossing over U.S. Route 130, Route 168 drops the Black Horse Pike designation and becomes Mount Ephraim Avenue as is runs between the Fairview section of Camden and the West Collingswood Extension section of Haddon Township. Here, the route narrows to a two-lane undivided road and passes more urban residences and businesses.[1][2] It crosses over County Route 630 before it becomes a three-lane road with a center left-turn lane and entirely enters Camden.[1] The road passes through commercial areas before crossing the North Branch of the Newton Creek, where it forms the border between Camden to the west and Woodlynne to the east. It becomes a four-lane undivided road that passes through industrial sectors before crossing a Conrail Shared Assets Operations railroad line and heading into urban developments. Route 168 ends at the intersection with County Route 603, where Mount Ephraim Avenue continues north as County Route 605 to downtown Camden, ending at an intersection with County Route 561.[1][2]

The predecessor to today's Route 168 was a set of Lenni Lenape trails that followed the Timber Creek.[3] In 1855, the Camden and Blackwoodstown Turnpike Company was established by entrepreneurs who had helped create the White Horse Pike to build a gravel road that would run from Camden south to Blackwoodtown and eventually to Atlantic City; this road became the Black Horse Pike.[4] The creation of the Black Horse Pike led to the development of several towns along the route.[3] The Black Horse Pike was transferred from the turnpike company to the county in 1903, at a time where many private turnpikes would become public roads.[5] In the 1927 New Jersey state highway renumbering, this portion of the Black Horse Pike was designated as part of a new route, Route 42, that was to run from Ferry Avenue in Camden south to Route 48 (now U.S. Route 40) in McKee City.[6][7] This portion of road retained the Route 42 designation in the 1953 New Jersey state highway renumbering.[8][9] In the late 1940s, a freeway was planned to bypass this portion of Route 42, with right-of-way acquisition and construction starting in the 1950s.[10] This new freeway, called the North–South Freeway, opened between Bellmawr and the Black Horse Pike in Blackwood in 1958 and from Blackwood to Turnersville in 1959.[11] With the opening of the freeway, the Route 42 designation was moved to the North–South Freeway and the Black Horse Pike between Turnersville and Camden became Route 168.[12]