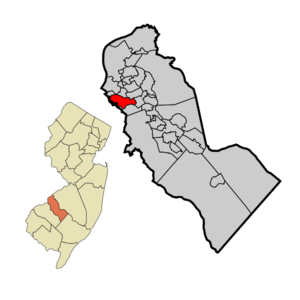 Bellmawr was incorporated as a borough on , , from portions of the now-defunct Centre Township, based on the results of a referendum held on , . The boroughs of Mount Ephraim, Runnemede and Lawnside were also created in the same two-day period.

Bellmawr is home to the main for the area, one of the largest in the state of New Jersey. In late October 2001 the office was closed due to possible contamination (see ). The office was re-opened several days later, in early November, after testing negative for anthrax.

There were 4,446 households out of which 26.9% had children under the age of 18 living with them, 52.3% were married couples living together, 12.6% had a female householder with no husband present, and 29.5% were non-families. 25.3% of all households were made up of individuals and 11.1% had someone living alone who was 65 years of age or older. The average household size was 2.53 and the average family size was 3.02.

Bellmawr is governed under the Borough form of New Jersey municipal government. The government consists of a Mayor and a Borough Council comprising six council members, with all positions elected at large. A Mayor is elected directly by the voters to a four-year term of office. The Borough Council consists of six members elected to serve three-year terms on a staggered basis, with two seats coming up for election each year. ["2005 New Jersey Legislative District Data Book", , April 2005, p. 28.]

For grades 9 through 12, public students attend (1,525 students), one of three high schools that are part of the . The other communities in the district are Gloucester Township and Runnemede. [ [http://education.state.nj.us/rc/rc07/narrative/07/0390/07-0390-050.html Triton Regional High School 2007 Report Card Narrative] , . Accessed , . "Triton houses over 1500 students residing in Runnemede, Bellmawr, and Gloucester Township."] The two other schools in the district are and .

Annunciation Regional School is an elementary school that operates under the auspices of the . [ [http://www.camdendiocese.org/schools/cc.html Camden County Schools] , . Accessed , .]

Various roads pass through Bellmawr, such as NJ 168, and very small portion of US 130. In terms of major highways, Bellmawr hosts the interchange with the "North-South Freeway" (NJ 42/I-76) and the 295 expressway. The passes through the southern part, hosting part of an interchange: Exit 3. Half of the interchange is Bellmawr, while the other part is in Runnemede. The Exit 3 toll gate is right on the line between Bellmawr and Runnemede, with a total of six lanes.