U.S. Route 1 is a major north–south U.S. Highway, extending from the Florida Keys in the south to the Canadian border in the north. In the U.S. state of Pennsylvania, US 1 runs for 81 miles (130 km) from the Maryland state line near Oxford to the New Jersey state line near Trenton.

US 1 enters Pennsylvania in southwest Chester County. At the border it becomes the John H. Ware III Memorial Highway (formerly Kennett-Oxford Bypass) and widens to a 4 lane divided highway. A mile into Pennsylvania, the Ware Highway diverts north of Baltimore Pike (former routing of US 1) and becomes a 4 lane limited access highway. At Kennett Square it rejoins Baltimore Pike and becomes a 4 lane divided highway. It then passes by Longwood Gardens, a year-round botanical garden, at the PA 52 North junction and Brandywine Battlefield, near where PA 52 splits off southward toward Wilmington, Delaware before intersecting with U.S. Highway 202 in Chadds Ford, Pennsylvania (at an intersection commonly known as "Painter's Crossing"). The road winds through Chadds Ford and Wawa, Pennsylvania, wherein it provides an address to the Wawa Dairy Farms, which went on to create Wawa Food Markets, one of the most successful local convenience store chains in the United States. Before arriving in Media, Pennsylvania, it exits from the Baltimore Pike and curves northeastward to become the "Media Bypass," a freeway that runs to the north of busy downtown Media. Baltimore Pike, meanwhile, becomes a local road, running parallel to, and south of, Route 1 through Media and Springfield, Pennsylvania before terminating in West Philadelphia as Route 13 near the University of Pennsylvania.

After providing drivers access to Interstate 476 by means of a three-level diamond interchange (this interchange is one of the busiest on I-476), the route becomes a local road again, first dubbed "State Road", then turns and becomes "Township Line Road" (after splitting with State Road), as it continues north through towns such as Springfield, Drexel Hill, and Upper Darby.

After intersecting PA Route 3 (West Chester Pike) in Upper Darby, Pennsylvania, not too far from the SEPTA transit system's 69th Street Terminal, Route 1 drops the "Township Line Road" moniker at Cobbs Creek, which separates Philadelphia and Delaware counties. It is now "City Avenue" (locally known as "City Line Avenue") and acts as a border between the city of Philadelphia and the Montgomery County suburbs of Bala Cynwyd, Merion Station, and Penn Wynne which are all located in Lower Merion Township. Saint Joseph's University makes its home on this particular stretch of the route, as do Philadelphia television stations WPVI-TV and WCAU-TV, whose studios happen to be on opposite sides of the roadway. Many of the city's radio stations are located just off City Avenue, mainly in Bala Cynwyd, Pennsylvania. As City Avenue, Route 1 intersects US 30 at the southwest corner of the St. Charles Borromeo Seminary grounds, before reaching St. Joe's, the two television stations, and the Schuylkill River.

City Avenue is also known as City Line Avenue, because the road lies on the border between Philadelphia and Montgomery Counties. Furthermore, the street was used as part of the dividing line when the 215 area code was split, with Philadelphia retaining 215 and the western suburbs becoming 610.

Some maps have this road as City Avenue, others, including the USGS topographic maps, have City Line Avenue. Google Maps lists both. The I-76 exit signs list City Avenue. 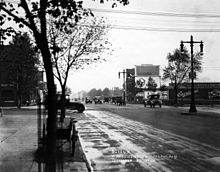 Roosevelt Boulevard (US 1) at Rhawn Street in Northeast Philadelphia

At the Schuylkill, US 1 interchanges with and becomes a brief part of Interstate 76 (the Schuylkill Expressway portion). This, too, is one of the busiest interchanges in the region, witnessing traffic backups in all directions during morning and afternoon rush hours. Now completely within the Philadelphia city limits, it becomes the Roosevelt Expressway upon crossing over the Schuylkill River.

At the end of the expressway, US 1 returns to grade level and becomes Roosevelt Boulevard. This portion of Route 1 is the proverbial lifeline of those wishing to access Northeast Philadelphia and regularly sees traffic tie-ups at all of its major intersections. The Roosevelt Boulevard portion of Route 1 is separated into two sections in each direction (a parkway "inner drive" portion and a local road "outer drive" portion) and is home to the intersections of Northeast Philadelphia streets Red Lion Road and Grant Avenue, two of the top three most dangerous intersections in the United States. Riders will also pass by the large outdoor Roosevelt Mall and the Northeast Philadelphia Airport before Route 1 junctions with the Pennsylvania Turnpike interchange 351/Bensalem (former "Philadelphia" interchange)[2] just across the Philadelphia/Bucks county line.

In Bucks County, Pennsylvania, Route 1 becomes Lincoln Highway, an accident-prone freeway that ferries motorists to and from southeastern Bucks County towns such as Bensalem and Langhorne. The latter suburb is home to suburban Philadelphia landmarks Oxford Valley Mall and the Sesame Place amusement park, based on characters from PBS' Sesame Street program. Crossing Interstate 95, it proceeds through Morrisville, Pennsylvania before crossing the Delaware River on the Trenton-Morrisville Toll Bridge into Trenton, New Jersey.

In Chester County, before the US 1 expressway was built there, US 1 continued up Baltimore Pike (which now has a dead-end section in Nottingham where northbound US 1 veers away from the Baltimore Pike alignment onto the expressway). In Oxford, US 1 northbound ran on S. 3rd Street, then turned right on Market Street (PA 472) (N. 3rd Street is the beginning of PA 10), then very quickly turned left onto Lincoln Street, and after leaving Oxford the road ran by Lincoln University. Approaching Avondale, Baltimore Pike traffic bent southeast along Pennsylvania Avenue (PA 41), then Baltimore Pike split off after Avondale. In the town of Kennett Square, northbound US 1 ran along Cypress Street (southbound US 1 ran along State Street), and those streets were marked E-W, not N-S. After Kennett Square, the US 1 expressway ends and its traffic merges onto Baltimore Pike.

Between Philadelphia and Trenton, US 1 is a part of the Lincoln Highway, a cross-country road that ran from New York City to San Francisco, California. It was also a part of the Byberry and Bensalem Turnpike between Oakford (Neshaminy Creek) and Philadelphia.

From the Lancaster Turnpike, where the Lincoln Highway headed west along U.S. Route 30, the Lincoln Highway originally headed east along Market Street to Penn Square, where it turned north onto Broad Street (Prior to the building of Roosevelt Boulevard, the main road followed Frankford Avenue to Bustleton Avenue from downtown.)

A bypass was added around downtown Philadelphia (in addition to the downtown route) in 1924, using Hunting Park Avenue, Ridge Avenue and City Avenue.[3][4] This alignment is now used by U.S. 1, except that Hunting Park and Ridge Avenues are now bypassed by the Roosevelt Expressway and Schuylkill Expressway.

A 1920 extension took the Boulevard to Welsh Road, allowing traffic to turn off Bustleton Avenue there (that route is still Route 532), and a 1920s extension took it to the intersection with Old Lincoln Highway just north of the Poquessing Creek bridge. North of there the present US 1 was completed in 1933 to the south end of the 1923 Langhorne bypass and in 1938 to Bellevue Avenue (Route 413) in downtown Langhorne.[4] 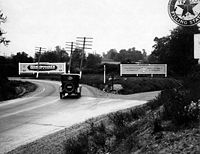 Lincoln Highway in Bucks County in 1922. This is now looking west on Woolston Drive with a ramp to the U.S. 1 freeway ahead; the underpass under the Trenton Cutoff is to the left.

From near Hornig Road in Northeast Philadelphia, the old alignment heads through woods, closed to traffic, paralleling power lines, after which it was upgraded on the spot to become Roosevelt Boulevard. The original route is then gated at an 1805 stone bridge across Poquessing Creek at the Philadelphia city line, just before crossing Roosevelt Boulevard. After crossing Street Road, the Old Lincoln Highway then becomes one-way southbound past the Bristol Road intersection and crosses the Neshaminy Creek. (This bridge itself was built in 1921 to replace a covered bridge just to the west.[4])

The present route of Lincoln Highway and US 1 Business was built in 1923,[4] bypassing Langhorne to the south and avoiding two railroad crossings. This crosses under the US 1 freeway just south of the railroad, where the older route had crossed the railroad. From Oakford, the Old Lincoln Highway heads northeast, no longer crossing SEPTA's West Trenton line, as the US 1 freeway crosses just to the east. It then headed onto Maple Avenue (Route 213) to pass through Langhorne. Past Langhorne, the original route used what is presently known as Lincoln Highway (U.S. Route 1 Business).

At Fallsington, the original road crossed the Pennsylvania Railroad's Trenton Cutoff on a bridge just east of the present bridge, built on a reverse curve to shorten the span. It used Trenton Road and Main Street from the bridge to the intersection with Woolston, where Main Street is now cut. In 1917, an underpass under the railroad was built to the west on Woolston Drive; this became the main route by 1924.[4][5]

It then headed toward Morrisville, where it first crossed the Delaware River the Calhoun Street Bridge, running along Trenton Avenue to Fallsington. In 1920 it was moved to the Bridge Street Bridge, passing through downtown Morrisville.