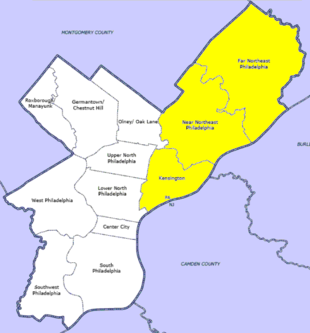 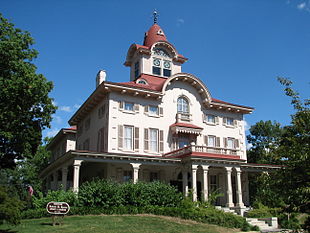 Northeast Philadelphia is bounded by the Delaware River on the east, Bucks County on the north, and Montgomery County on the west. The southern limit is given as Frankford/Tacony Creek or Adams Avenue.[3] 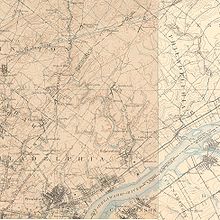 The Northeast in 1900, showing the region still to be a collection of towns and farms. Click for larger image.

The first European settlement in the Northeast was by Swedish farmers, who emigrated there when the area was a part of the New Sweden colony.[4] They were followed by English Quakers, including Thomas Holme, who came to begin the settlement of William Penn's Pennsylvania colony in the late 1680s. In the years to follow, Northeast Philadelphia developed as a scattering of small towns and farms that were a part of the county, but not the city, of Philadelphia. Before consolidation with the city, what is now the Northeast consisted of the townships of Byberry, Delaware, Lower Dublin, Moreland, and Oxford, (largely rural areas); and the boroughs of Bridesburg, Frankford, and White Hall, which were more urbanized.[5]

Growth in industry and farming

While most of the land in what is now the Northeast was dedicated to farming, the presence of many creeks, along with proximity to Philadelphia proper, made the towns of the Northeast suitable for industrial development. The Northeast's first factory was the Rowland Shovel Works on the Pennypack Creek. In 1802, it produced the first shovel made in the United States.[6] More mills and factories followed along the Pennypack and Frankford Creeks, and traces of the mill races and dams remain to this day. The most famous of these factories was the Disston Saw Works in Tacony, founded by English industrialist Henry Disston, whose saw blades were world-renowned.[6][7]

By 1854, the entire County of Philadelphia was incorporated into the City.[5] In spite of the political incorporation, the Northeast retained its old development patterns for a time, and the dense populations and urban style of housing that marked older, more traditional sections of the city had not yet found their way there.[8] In the first three decades of the 20th century, rapid industrialization led to the growth of industrial sections of the northeast and the neighborhoods surrounding them.[9] These demographic changes, along with the building of the Market-Frankford Line train and new arterial highways, such as the Roosevelt Boulevard, brought new middle class populations to the lower half of the Northeast.[10] Vast tracts of row homes were built in that section of the Northeast for new arrivals in the 1920s and 1930s, typically with small, but valued front lawns, which impart a "garden suburb" quality to much of the Northeast, reducing the sense of physical density felt elsewhere in the city.[11] Much of this development occurred east of Roosevelt Boulevard (Mayfair, Torresdale) and in Oxford Circle.[10] 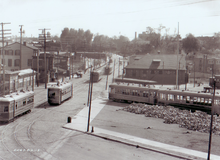 Frankford Terminal in 1918, before the construction of the Frankford El.

After World War II, newer arrivals, armed with the mortgage benefits of the GI Bill, brought the baby boom to the Northeast. This newer population was heavily Jewish or ethnic Catholic[12] (including Irish-, Italian-, Polish-, and German-Americans) and completed the development of the region, filling in undeveloped areas of Rhawnhurst and Bell's Corner and developing the previously rural Far Northeast. As older sections of the city lost populations of young families, the Northeast's school-age population swelled, requiring rapid expansion of schools, libraries, cinemas, shopping, transportation, restaurants and other needed amenities.[13]

The period from 1945 through the 1970s was marked in many American cities by urban decline in older, more industrial areas. This was especially true in Philadelphia, in which much of the city's North, West and South sections lost population, factories, jobs and commerce, especially associated with "white flight." During the postwar period, the Northeast experienced a heavy influx of growing middle class families, and had become an almost exclusively white community. This aroused controversy in the 1960s and '70s, as passions for and against school busing were focused on the Northeast, to address racial imbalances, especially in the city's public schools. That racial imbalance was ultimately addressed by the upward mobility enjoyed by many of the graduates of the Northeast's excellent public and parochial school systems, who made their way out of the Northeast and into the suburbs from the 1980s onward, making room for new arrivals from the city's Latino, African American and Asian populations.[14]

Frankford and Cottman Avenues, a central location in the Northeast

In the 1980s, the Northeast developed along a separate path from much of the rest of the city. In addition to the racial differences mentioned above, the political climate in the Northeast was balanced evenly between Republicans and Democrats, while the rest of the city almost uniformly voted for the latter party.[15] As a result, many Northeasters became more and more discontented with the high city taxes and a perceived imbalance in the services they received for them.[16] This discontent grew to give rise to a secessionist movement, led by State Senator Hank Salvatore, among others. Salvatore introduced a bill in the State Senate to allow the Northeast to become a separate county called Liberty County, but the bill failed to progress beyond this stage.[16] As the Philadelphia economy grew stronger, and the most discontented people fled to the suburbs, and a new, more popular mayor, Ed Rendell, was elected the call for secession waned, and the section settled back into life as a part of the city.

Today, the Northeast enjoys greater racial balance and relative stability. The region is uniformly developed, but like many American urban communities, it has witnessed the loss of manufacturing, factory conversions to marginal retail "outlets," and growing vacancies along shopping avenues, especially in the southern part of the region. During the housing boom of the first decade of the 21st century, favorable property tax advantages granted to new construction within the city limits led to a growth in residential units and an escalation of existing home prices in the Northeast.[17]

Unlike the rest of Philadelphia (a solidly Democratic city) there is lively competition between Republicans and Democrats in some parts of the Northeast. For example, Republicans currently hold three of the State Representative seats in the Northeast and one non at-large Philadelphia City Council seat. As of 2011, no Republican represents any part of the Northeast in the United States Congress except for the small portion within the 8th district.[20]

Almost all of Northeast Philadelphia is in the 13th Congressional District of Pennsylvania, and is currently represented by Allyson Schwartz.[21] Some small parts of the section fall into the 1st, 2nd, or 8th districts.[22]

In the Pennsylvania State Senate, most of the Northeast is in the 5th district, represented by Michael J. Stack, III, (D).[23] Smaller parts are represented by Shirley Kitchen (D), 3rd district,[24] or Christine Tartaglione (D),[25] 2nd district.[26]

The Northeast is represented by several members in the House including that of Dennis M. O'Brien (R), former Speaker of the Pennsylvania House of Representatives. Other State Representatives whose districts are in all or part of the Northeast are John Taylor (R), Brendan F. Boyle (D), Kevin J. Boyle (D), Michael McGeehan (D), John Sabatina, Jr. (D), Tony Payton (D), Mark B. Cohen and Dwight E. Evans (D).[27]

Jack Kelly, an at-large member, is also from the Northeast.[32] The Republican candidate for mayor of Philadelphia in 2007, Al Taubenberger resides in the Northeast and is president of the Greater Northeast Philadelphia Chamber of Commerce.[33] 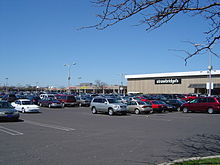 The Roosevelt Mall on Cottman Avenue

Northeast Philadelphia is home to Franklin Mills, a shopping mall that was built on what was once Liberty Bell Park Racetrack, and is one of the most visited attractions in the state.[35] The lower sections of the Northeast still boast pleasant shopping avenues lined by stores and restaurants, such as Castor Avenue. Major shopping centers along Cottman Avenue include, the Cottman-Bustleton Center, and the Roosevelt Mall which opened in 1964 at Cottman Avenue and the Roosevelt Boulevard.[36]

Prior to its disestablishment, Ransome Airlines had its headquarters on the grounds of Northeast Philadelphia Airport.[39]

The first school was founded in the Northeast in 1723 by Silas Crispin, Thomas Holme's son-in-law.[40] The Northeast is home to Fox Chase Farm, an educational facility that is the only working farm left in the Philadelphia city limits.[41] 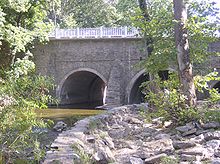 Frankford Avenue bridge over the Pennypack in Holmesburg

The main campus of Holy Family University is located in Northeast Philadelphia. The university, founded in 1954, has more than two thousand students.[42]

The Roman Catholic Archdiocese of Philadelphia operates Catholic schools. Catholic high schools in Northeast Philadelphia include Archbishop Ryan, Father Judge, Cardinal Dougherty, Northeast Catholic, and St. Hubert Catholic High School for Girls.[44] It was announced in October 2009 that both Cardinal Dougherty and Northeast Catholic would be closed due to decreasing enrollments.[citation needed] Nazareth Academy is an independent Catholic high school founded and operated by the Sisters of the Holy Family of Nazareth.

A prominent geographic feature and recreation destination in Northeast Philadelphia is Pennypack Creek, which runs through Pennypack Park. The park's 1,600 acres (6.5 km2) of woodlands span the width of the Northeast, and serve as a natural oasis amid urban development. The park is home to the oldest stone arch bridge still in use in the United States, built in 1697 on what is now Frankford Avenue.[45][46] The section is also home to many playgrounds and smaller parks, including Burholme Park.

The Tacony-Palmyra bridge connects the Northeast with New Jersey.

The Tacony-Palmyra Bridge, the only Delaware River crossing in Philadelphia not operated by the Delaware River Port Authority (thus resulting in a cheaper toll), allows one to drive between the Tacony section of the city and Palmyra, New Jersey.[47]

The Northeast is also served by SEPTA's Market-Frankford Line, often called the "Frankford El" or "the El" because portions of the rail line are elevated above streets below, including Frankford and Kensington avenues. The northernmost and easternmost terminus of the line is at the Frankford Transportation Center, Frankford Avenue and Bridge Street. Three commuter rail lines also serve the Northeast. An extension of the Broad Street Line along Roosevelt Boulevard has been proposed. Many SEPTA bus routes and all three of its trackless trolley routes run through the Northeast, although north-south buses run more frequently than west-east ones. Most north-south routes terminate at the Frankford Transportation Center.[48]

One of two airports that serve Philadelphia, Northeast Philadelphia Airport (PNE), is located in this section of the city. PNE is the sixth busiest airport in Pennsylvania.[49]