Route 145 is the main arterial into Allentown, Pennsylvania, the third-largest city in the state.[3] In Whitehall Township, a seven-mile (11.2 km) portion of PA 145 is known as MacArthur Road, named in honor of Gen. Douglas MacArthur.[4]. MacArthur Road is almost entirely divided; between US 22 and Eberhart Road, it is six-lanes wide with ramps. In Whitehall Township, MacArthur Road is the location of the main commercial center of the Lehigh Valley. The Lehigh Valley Mall, a large Allentown-area shopping mall, is situated on Route 145.[5]

PA 145 begins at an interchange with Interstate 78 at exit 60 and PA Route 309 in Upper Saucon Township, located 4 miles (6.4 km) southeast of downtown Allentown. This interchange is not only the southern terminus of PA 145, but also the eastern terminus of the Interstate 78/PA Route 309 concurrency. Just north of I-78, PA 145 is known as South Pike Ave. and meets Vera Cruz Rd. and Oakhurst Dr. at an at-grade intersection.[6] 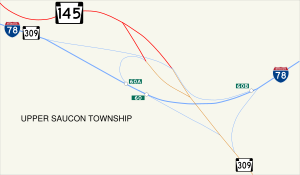 Diagram of the interchange at PA 145's southern terminus

Going down a steep hill, PA 145 enters the city of Allentown as South 4th St. At the end of the hill, PA 145 intersects Emaus Avenue, a major road that connects Bethlehem, Allentown, and Emmaus. Past Emaus Avenue, PA 145 continues through the Allentown neighborhood of Mountainville, passing east of a shopping center with stores such as Price Rite and K-Mart. Exiting Mountainville, PA 145 turns west onto Susquehanna Street and crosses both Trout Creek and the Norfolk Southern Railway before making a wide curve to the north and becoming S. 5th St.[8]

Just after becoming S. 5th St., PA 145 divides into a pair of one-way streets, known as a one-way couplet. Southbound PA 145 follows S. 6th St., which then turns to the east onto Wyoming St. and reunites with the other half at South Fifth Street. Northbound PA 145 is known as S. 5th St.; it passes Good Shepherd Hospital, turns west onto Auburn St., and reunites with southbound PA 145 at a junction with S. 6th St. and Lehigh St. North of the split, PA 145 becomes Lehigh St., crosses Little Lehigh Creek, and intersects Martin Luther King, Jr. Drive. Slightly north of the M.L.K. Drive intersection, PA 145 progresses on its alignment up a long hill.[9]

At the top of the hill, PA 145 divides again, as northbound PA 145 turns east onto Union St. while southbound PA 145 comes from the west, also as Union St. Just after becoming Union St., northbound PA 145 turns back northward to become 6th St. While southbound PA 145 is known as 7th St., it passes through the commercial district of Allentown and is a major one-way three-lane street home to one of Allentown's oldest supermarkets, Little Apple Market.[10] At the intersection of 7th and Hamilton Streets, there is a monument called the Sailors and Soldiers Monument in Center City, Allentown. The monument was built to honor General Phillip Sheridan’s Civil War unit and the 47th Regiment of Pennsylvania Volunteers.[11] Meanwhile, Route 145 continues its alignment as 6th St. and intersects the northern terminus of Route 222 (which is split into Walnut and Linden Streets). 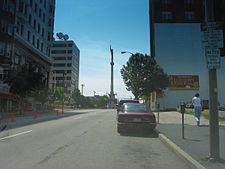 Sixth St. is home to The Morning Call, Allentown's main newspaper distributor. In the northern region of Allentown, PA 145 (as Seventh and Sixth Streets) intersects Tilghman St., one of the major streets in Allentown.[12] After crossing Tilghman St., northbound PA 145 turns west onto Washington St. and then north onto 7th St. to reunite with southbound Route 145. North of Washington St., PA 145 continues its course as 7th St., consisting of three lanes. Then, PA 145 crosses a tall bridge over Sumner Avenue, leaves Allentown, and becomes MacArthur Rd.[13] 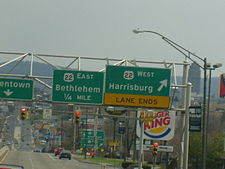 After crossing the bridge, PA 145 enters Whitehall Township and becomes a divided highway known as MacArthur Road, consisting of four lanes. This section of PA 145, previously known as Seventh Street Pike, or the Seventh Street Extension, was renamed in honor of Gen. Douglas MacArthur by township supervisors in 1942.[4] In Whitehall, PA 145 passes several intersections, including Mickley Rd., Jordan Pkwy., and, after crossing Jordan Creek, Fairmont Ave. Just north of Fairmont Ave., PA 145 intersects the Lehigh Valley Thruway (US 22) at a full cloverleaf interchange. North of this point, PA 145 has been widened to six lanes.[14]

Just north of US 22, PA 145 traverses the main commercial center of the Lehigh Valley, passing to the west of Lehigh Valley Mall. The first junction is Grape St., with two ramps to access it from both directions. PA 145 continues through numerous stores and businesses, passing to the west of Whitehall Mall and making a second junction with Mickley Rd. before crossing Schadt Ave. At the intersection with Eberhart Rd., PA 145 is no longer a divided, six-lane road, but rather an undivided four-lane road. About a mile north of Eberhart Rd., PA 145 becomes a divided highway again, but with only four lanes.

About a mile west of Northampton, PA 145 meets PA Route 329. North of there, PA 145 continues its course as MacArthur Rd. MacArthur Rd. comes to an end as PA 145 continues its alignment as a two lane road; at this point, the Lehigh River is almost visible and is only about 280 feet (85.3  meters) east of PA 145. After crossing the village of Laurys Station, PA 145 curves to the west and leaves Lehigh County while crossing the Lehigh River on the Treichlers Bridge.[15]

After PA 145 crosses the bridge over the Lehigh River, the highway enters Northampton County and intersects Blue Mountain Drive, which has direct access to the Blue Mountain Ski Area.[16] Then, PA 145 curves to the south as Riverview Drive, later diverging to the west and back to the north, parallel to the Lehigh River. PA 145 enters Walnutport from the south as Riverview Drive which becomes Best Avenue upon entering the borough.[12] At the center of Walnutport, Route 145 meets Main Street. In Lehigh Township, PA 145 becomes Riverview Drive once again as it terminates at an intersection with PA Route 248 located in Weiders Crossing. The northern terminus of PA Route 873 is also on PA 248, just north of PA 145.[9]

By 1940, Route 145 was a north–south route, replacing the previous PA 329 designation. From Tilghman Street to Lehigh Street, US 309 and PA 29 were designated along 7th Street and the northernmost part of Lehigh Street, sections of the modern PA 145. Prior to the 1960s, US 309 was designated onto the southernmost segment of present-day PA 145, from downtown Allentown to Summit Lawn.[19]

In 1984, PennDOT proposed to extend Route 145 to Interstate 78 and Pennsylvania Route 309 in Lanark. Traffic engineer Samuel D. Darrohh said that Allentown is one of few Pennsylvania cities without a traffic route going through it. He supported his idea by saying that motorists also might be aided if U.S. Route 222 eventually is extended along Hamilton Boulevard to connect with the proposed PA 145 corridor. By 1991, the extension was completed.[21][22][23]