Cheltenham
For other places with the same name, see Cheltenham (disambiguation).

/ˈtʃɛltnəm/), also known as Cheltenham Spa, is a large spa town and borough in Gloucestershire, on the edge of the Cotswolds in the South-West region of England. It is the home of the flagship race of British steeplechase horse racing, the Gold Cup, the main event of the Cheltenham Festival held every March. The town hosts several festivals of culture often featuring nationally and internationally famous contributors and attendees; Cheltenham Literature Festival, Cheltenham Jazz Festival, Cheltenham Science Festival and Cheltenham Music Festival.[1]

The town was awarded a market charter in 1226, and has been a health and holiday resort since the discovery of mineral springs there in 1716. Horse racing began in Cheltenham in 1815, and became a major national attraction after the establishment of the Festival in 1902. On 1 April 1974, under the Local Government Act 1972, the borough of Cheltenham was merged with Charlton Kings urban district to form the non-metropolitan district of Cheltenham. Four parishes — Swindon Village, Up Hatherley, Leckhampton and Prestbury — were added to the borough of Cheltenham from the borough of Tewkesbury in 1991.

Cheltenham is a regional shopping centre, home to several shopping centres and department stores, the oldest being Cavendish House from 1823. It is well-known locally for its nightlife, with a wide range of pubs, wine bars, clubs and restaurants. It has a Michelin two-star restaurant, Le Champignon Sauvage. In 2006, Cheltenham was voted the best place to live in Britain.[2] 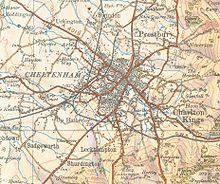 This place takes its name from the small river Chelt, which rises nearby at Dowdeswell and runs through the town on its way to the Severn.[3] The town was awarded a market charter in 1226. Though little remains of its pre-spa history, Cheltenham has been a health and holiday spa town resort since the discovery of mineral springs there in 1716. The visit of George III with the queen and royal princesses in 1788 set a stamp of fashion on the spa.[4] The spa waters continue to be taken recreationally at Pittville Pump Room, built for this purpose and completed in 1830;[5] it is a centrepiece of Pittville, a planned extension of Cheltenham to the north, undertaken by Joseph Pitt, who laid the first stone 4 May 1825.[6] Cheltenham's success as a spa town is reflected in the railway station, which is still called Cheltenham Spa, and spa facilities in other towns that were inspired by or named after it.[7]

Horse racing began in Cheltenham in 1815, and became a major national attraction after the establishment of the Festival in 1902.[8] Whilst the volume of tourists visiting the spa has declined, the racecourse attracts tens of thousands of visitors to each day of the festival each year,[9] with such large numbers of visitors having a significant impact on the town.

The first British jet aircraft prototype, the Gloster E.28/39, was manufactured in Cheltenham. Manufacturing started in Hucclecote near Gloucester, but was later moved to Regent Motors in Cheltenham High St (now the Regent Arcade), considered a location safer from bombing.

Cheltenham is split into 20 wards, with a total of 40 councillors elected to serve on the borough council. Since 2002 elections have been held every 2 years with half of the councillors elected at each election. Following the last election in 2010 there were 25 Liberal Democrat members, 12 Conservatives and 3 representing People Against Bureaucracy.[11]

Cheltenham is on the edge of the Cotswolds in the South-West region of England. It has an image of being respectable and wealthy. The small River Chelt flows under and through the town and is subject to regular floods.[12] It had a population of 110,013 at the 2001 census. The inhabitants are known as "Cheltonians".

Originally developed in the 1830s in conjunction with the spas, it is now known for its bars, cafés, restaurants and range of specialist shops.

Lansdown Crescent is a Regency period terrace, designed by John Buonarotti Papworth for R.W. and C. Jearrad and constructed in the 1830s. The terrace is convex, and opposite the north-eastern part stands Lansdown Court, an Italianate villa possibly designed by Papworth but more probably by the Jearrads and built about 1830.

Charlton Park is a former 72-acre (290,000 m2) historic park with mansion house,[15] about a mile south-east of the town centre. From 1935 the parkland gradually became a private residential area, the main housing development taking place between 1976 and 1983. The original mansion house dated from the 13th century; alterations throughout the centuries transformed it from a medieval, timber-framed hall-house into an 18th-century brick-faced mansion in the classical style. In the 1780s the estate was emparked for deer and had magnificent Dutch-style water gardens. After 1935 the old house became part of Charlton Park Convent, and since 1987 has been part of St Edward's School.

Prestbury is a small village on the outskirts of Cheltenham towards Winchcombe and Bishops Cleeve. It contains period houses as well as their modern counterparts. The village is built around the church in the centre. The war memorial in the centre of the village is a constant reminder of the losses made through the two world wars. 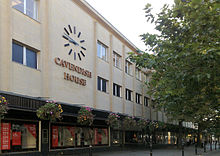 Kraft Foods' UK headquarters is presently in the St. George's House in Cheltenham,[16] but will close sometime in 2011 after Kraft's purchase of Cadbury's, with the jobs moving to Cadbury's sites in Uxbridge and Bournville.[17]

Cheltenham is a regional shopping centre, home to department stores, the oldest being Cavendish House, from 1823,[18] and centres including the Regent Arcade and the Beechwood Shopping Centre. It is well-known locally for its nightlife, with a wide range of pubs, wine bars, clubs and restaurants. It has a Michelin two-star restaurant, Le Champignon Sauvage. 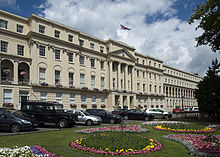 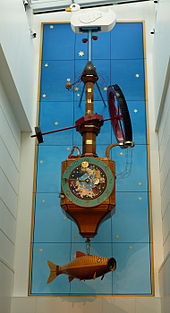 The mechanical clock in the Regent Shopping Arcade, designed by Kit Williams. The distance from the duck to the fish is 14 metres.

The town is famous for its Regency architecture and is said to be "the most complete regency town in England".[19] Many of the buildings are listed, including the Cheltenham Synagogue, judged by Nikolaus Pevsner to be one of the architecturally "best" non-Anglican ecclesiastical buildings in Britain.[20]

The Cheltenham Art Gallery & Museum has a notable collection of decorative arts from the era of the Arts and Crafts Movement. The Holst Birthplace Museum contains personal belongings of the composer of The Planets, including his piano. It also includes a working Victorian kitchen and laundry, Regency drawing room and an Edwardian nursery.

Every year, Cheltenham Festivals organises music, jazz, literature and science festivals in the town, attracting names with national and international reputations in each field. Events take place at venues including the Town Hall, the Everyman Theatre, The Playhouse Theatre and the Pittville Pump Room.

A fifth cultural festival, the Cheltenham Folk Festival, is separately organised but also attracts international performers. A more local event, the Cheltenham Festival of the Performing Arts (formerly Cheltenham Competitive Festival) is a collection of more than 300 performance competitions that is the oldest of Cheltenham's arts festivals, having been started in 1926.

Cheltenham has played host to a number of high profile film and TV series. The BBC TV series Butterflies, as well as the film If.... (1968) were both filmed in the town.[22]

The oldest school in Cheltenham is Pate's Grammar School (founded in 1574).[23] Cheltenham College (founded in 1841) was the first of the major public schools of the Victorian period.[24] The school was the setting in 1968 for the classic Lindsay Anderson film if.....[25] It also hosts the annual Cheltenham Cricket Festival, first staged in 1872, and the oldest cricket festival in the world.[26]

The most famous school in the town, according to The Good Schools Guide, is Cheltenham Ladies' College (founded in 1853).[27][28] Dean Close School was founded in 1886 in memory of the Reverend Francis Close (1797–1882), a former rector of Cheltenham.[29] The town also includes several campuses of the University of Gloucestershire, one other public and six other state secondary schools, plus institutions of further education. 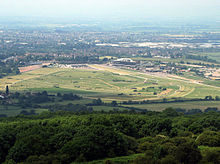 The racecourse from Cleeve Hill

Cheltenham Racecourse, in the nearby village of Prestbury, is the home of National Hunt, or jumps, racing in the UK. Meetings are hosted from October to April. The highlight of the season is the Cheltenham Gold Cup, which is normally held in the middle of March, during the Cheltenham Festival.

The Cheltenham Rugby Festival is a rugby league-nines event held in May.

The town has one golf course, Lilley Brook, in Charlton Kings.

Cheltenham has one of the largest croquet clubs in the country, and is home to the headquarters of the national body of the sport, the Croquet Association. The East Glos tennis, squash and women's hockey club, which was founded in 1885, is also located in the town.

Sandford Parks Lido is one of the largest outdoor pools in England. There are a 50 m (164 ft) main pool, a children's pool and paddling pool, set in landscaped gardens.

Cheltenham Festival is a significant National Hunt racing meeting,[30] and has race prize money second only to the Grand National. It is an event where many of the best British and Irish trained horses race against each other, the extent of which is relatively rare during the rest of the season.

The festival takes place annually in March at Cheltenham Racecourse. The meeting is often very popular with Irish visitors,[31] mostly because of that nation's affinity with horse racing, but also because it usually coincides with St. Patrick's Day, a national holiday in celebration of the patron saint of Ireland.

Large amounts of money are bet during festival week, with hundreds of millions of pounds being gambled over the four days.[citation needed] Cheltenham is often noted for its atmosphere, most notably the "Cheltenham roar", which refers to the enormous amount of noise that the crowd generates as the starter raises the tape for the first race of the festival. 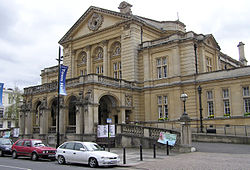 The town hall, erected in 1902 to commemorate the coronation of King Edward VII and Queen Alexandra.

The Cheltenham Spa Express, once known as the "Cheltenham Flyer", is a named passenger train connecting Cheltenham with London.

The restored station at Cheltenham Racecourse is the southern terminus of the Gloucestershire Warwickshire Railway heritage railway.

Cheltenham is adjacent to the M5 motorway (between Bristol and Birmingham) and its junction with the A417 to Swindon, and the A40 runs from across the M5 through the town towards Oxford and London.

National Express operate a number of coach services from Cheltenham including the 444 to London and the 222 to Heathrow and Gatwick airports.

Cheltenham was a terminus of the Gloucester and Cheltenham Tramroad.

Cheltenham's Church of England parish church is St. Mary's, which is the only surviving medieval building in the town. As a result of expansion of the population, absorption of surrounding villages, and the efforts of both evangelical and Anglo-Catholic missions, the town has a large number of other parish churches, including Trinity Church, one of the largest Church of England congregations outside London,[citation needed] and All Saints', Pittville, where the composer Gustav Holst's father was the organist.

The town has two notable rings of bells hung for change ringing. One is at St. Christopher's (Warden Hill), the lightest ring of church bells in the world.[32] The bells of St. Mark's are renowned for their tonal excellence and ease of "handling".[33] The product of John Taylor's Bell Foundry, they were cast in 1885 and 2007 and have undergone a major refurbishment. The other is a ring of 12 bells dating mainly from the 19th century hung in St. Mary's Church. These were the venue in 2008 for the eliminators of the National 12 Bell Striking contest, in which teams of campanologists from around the world compete to win the Taylor Trophy. The towers in the locality of Cheltenham belong to the Cheltenham branch of the Gloucester & Bristol Diocesan Association of Church Bell Ringers.

St. Gregory's Roman Catholic church is an example of the work of the architect Charles Hansom.[34] The Gothic Revival building was built 1854-57, the porch was added in 1859, the tower and spire were completed in 1861 and the nave was extended to join the tower in 1877.[34] The church's s stained glass is by Hardman & Co.[34]

The twinning emblems for Cheltenham, Göttingen and Toruń

Cheltenham is twinned with:[35]

The town has 'Friendship' status with: