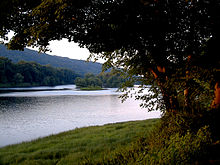 Worthington State Forest, from a campsite

The Delaware Water gap began to form four hundred fifty million years ago when quartz pebbles were deposited in a shallow sea, on top of the Ordovician Martinsburg shale. The Martinsburg shale was uplifted, when a chain of volcanic islands collided with proto North America around four hundred fifty million years ago. These islands went over the North American plate. This collision deposited rock on top of the North American plate. This is how the Highlands and Kittatinny Valley were created.

Then around four hundred million years ago a small continent that was thin and long, then collided with proto North America. Geologic pressure twisted the Silurian Shawangunk Conglomerate, therefore breaking or shattering the gray quartzite as it uplifted. Pressure from this continental strike, compressed the bed rock of the quartzite, created heat, allowed the quartzite to bend and melt silica to bond the quartz pebbles and other conglomerate together. Geologic pressure forced the quartzite up, and the Delaware River slowly cut its path through the shattered quartzite. Otherwise the river may not have been able to cut its path through the quartzite. As one can see, the top ridge of the Kittatinny is offset from the top of Blue Mountain.

Millions of years of rain, ice, snow and wind erosion shaped the area. The Wisconsin glacier which occurred between 21,000 BC to 13,000 BC, covered the entire Kittatinny Ridge and ended near Belvidere. This was the final touch to the Gap's look.

The mountain is of the Silurian Shawangunk conglomerate. This is a gray quartzite, which makes the mountain highly resistant to weathering. The Silurian High Fall formation of sandstone is on the western side of the gap near the base. The eastern side of the Mountain has the Ordovician Martinsburg shale. Sedimentary rock is along the river. The Bloomsburg Red Beds which is a red shale is at the Gap under Dunsfield Creek.

The width at the base of the Gap is about 300 meters at River level and 1400 meters at the top. The river at this spot is 283 feet above sea level. The ridge of the Appalachians that the Delaware crosses is called the Blue Mountains in Pennsylvania and the Kittatinny Ridge in New Jersey. This is the first major ridge of the Appalachian mountains. The New Jersey mountain is Mount Tammany;named after the Native American Chief Tamanend. The Pennsylvania mountain is Mount Minsi, named after the Native American Tribe of the area. The summit of Tammany is 1,540 ft (470 m) above sea level.

Dunfield Creek drains the Mountain and flows into the Delaware River. This creek flows over the Bloomsburg Red Beds of shale.

To the east of the Gap is the Great Kittatinny Valley which is wide, and goes northeast along the Kittatinny Mountain. The Paulinskill River drains the valley in this area.

A northern deciduous forest cloaks the slopes of the Delaware Water Gap. Hardwood species comprising the forest include various oaks, hickories, maples, ash, elm, cherry, walnut, birch, sycamore and beech. Coniferous species include Eastern White Pine, Pitch Pine, Eastern Red Cedar and Eastern Hemlock. Black bear, whitetailed deer, gray squirrels, raccoons, gray fox and chipmunks are some of the forest species of the area. Shad migrate up the river through the gap in the spring. Other fish include bass, trout, carp and walleye. Timberback rattle snakes and copperheads also inhabit the rocky areas of the mountain. Salamanders are found in the moist areas of the forest. Eastern Prickly Pear Cactus also grows on the mountain near the red dot trail on the south eastern facing slope half way up the mountain.

After the Wisconsin Glacier melted, grasses and trees slowly grew. Big game moved through the area. Paleo Indians then moved into the area as the climate warmed.

Paleo Indians were north of the Gap at Paraquarry, as found at the Harry's Farm Site. Charcoal from this place has been dated at 5430 BC + or - 120 years. However Caribou bones found at the Dutchess Quarry Cave near Florida, New York, has the bones dated at 10,580 BC + or - 370 years. So that would place early man at 10,210 BC to 10,950 BC in Florida, New York. Another Paleo Indian site located in Pennsylvania along the Delaware just north of the Gap, has carbon dating of charcoal at 8900BC. Most likely Paleo Indians were at the Gap around 10500 BC.

The Lenni Lenape, Native Americans, came from the west and inhabited the area for several thousand years. They hunted, fished and trapped, in this area. Later came the Dutch and other European settlers to the area in the very late 17th century. The rocks of the Gap were steep along the rivers edge on both sides of the river. Foot travel was not possible along the river through the Gap. 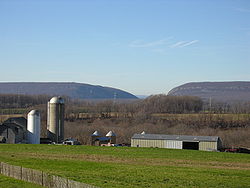 The Delaware Water Gap from Knowlton Township in New Jersey.

The Delaware Water Gap National Recreation Area was created in 1965 by President Johnson. There are two offices, one located in New Jersey near the Delaware River and the other in Pennsylvania, north of the Gap.

The Red Dot Trail is a path to the top of the Kittatinny Ridge, which has views of the entire area. This is roughly a one hour hike, traversing over 600 vertical feet. The red dot trail is highly eroded due to weather and large numbers of hikers. The Gray Dot Trail is a very steep climber's trail that goes from I-80 to the top of the gap along the top edge of the big wall. This trail intersects with the blue dot and red dot trail at the top. The hike up the gray dot trail and down the red dot trail takes about two hours and fifteen minutes. The blue dot also goes to the top, but is about a 3-mile hike that is less steep than the red dot.

The Appalachan Trail crosses the Delaware River on the Route 80 Bridge and goes up Dunfield Creek to Sunfish Pond and continues northeast to Stokes State Forest. The trail crosses Route 206 and continues along the top of Kittatinny Mountain to High Point State Park where the trail turns east and eventually goes into New York State.

The Gap is the premier place to rock climb in New Jersey. The climbs are one hundred fifty feet (50 meters) to three hundred feet ( 100 meters) , climbing on Silurian Shawagunk Conglomerate which is quartzite, with bands of shale from a half inch to four inches thick. Most cracks are horizontal, flaring out near the edge. Adjustable cams are probably the best for climbers to use. Most climbing is done on the New Jersey side due to easier access. Climbers can walk along the cement wall along I-80 until they pass the big wall on I-80 and then go up a path that follows the base of the big wall.

On the Pennsylvania side (Mount Minsi), park at the cold air cave pull-off on Route 611, then follow a steep and strenuous trail up the talus to the cliffs. Most routes are then to the left (south). In recent years, the PA side has been closed to climbing during the nesting season for Peregrine Falcons, this has resulted in overgrowth of trails and climbing routes, providing an experience closer to the natural state than found at more popular climbing destinations.

The path that follows the base of the big wall on the New Jersey side is steep, with poison ivy in the spring and summer. Occasionally there is falling rock, so one must use caution. The wall also has poison ivy growing on it. The sun shines on the wall from 10am to 3pm. The sound of Route 80 can be heard while climbing and is somewhat loud in nature. This can severely affect communication between lead climber and belayer. This is one reason most lead climbers do not go to far from the belayer. The lead climber then sets up protection to belay the second.

In 1962, Congress authorized the building of the Tock's Island Dam. This was due to control the flooding of the Delaware River due to hurricanes passing through the area. The dam was planned upstream of the water gap at Tocks Island, but was never built, although the land for the proposed reservoir had already been purchased. The Delaware Water Gap National Recreation Area was created from the land acquired for the planned reservoir.

The Easton Area Council of the Boy Scouts of America operated Weygadt Scout Reservation in the Delaware Water Gap at the base of Mount Tammany from 1931 until 1968.[2] The Reservation was originally home to two Scout camps — the Easton Council's Camp Weygadt on the southern part of the reservation and the Bethlehem Area Council's Camp Minsi on the northern section of the reservation.[2][3] In the later part of the 1930s, the Bethlehem Council moved their to the Poconos, and the entire reservation in the Water Gap became Camp Weygadt. Camp Minsi is now located in Pocono Summit, Pennsylvania on the shores of Stillwater Lake.

Pahaquarra Boy Scout Camp was located on on the New Jersey side of the Delaware Water Gap on Old Mine Road. The camp served Boy Scouts from the George Washington Council.