Philadelphia City Hall is the house of government for the city of Philadelphia, Pennsylvania. At 167 m (548 ft), including the statue, it is the world's second-tallest masonry building, only .5 m (1 ft 8 in) shorter than Mole Antonelliana in Turin.[3][4] The weight of the building is borne by granite and brick walls up to 22 feet (6.7 m) thick, rather than steel; the principal exterior materials are limestone, granite, and marble. 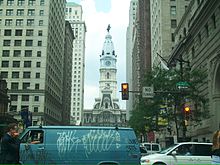 The building was designed by Scottish-born architect John McArthur, Jr., in the Second Empire style, and was constructed from 1871 until 1901 at a cost of $24 million. Designed originally to be the world's tallest building, by the time it was completed it had already been surpassed by the Washington Monument and the Eiffel Tower, though it was indeed the world's tallest habitable building at the time of opening. It also was the first modern building (excluding the Eiffel Tower, see above) to be the world's tallest and also was the first secular habitable building to have this record: all previous world's tallest buildings were religious structures, whether European cathedrals or, for the previous 3,800 years, the Great Pyramid of Giza.

With almost 700 rooms, City Hall is the largest municipal building in the United States and one of the largest in the world.[5] The building houses three branches of government, the Executive (Mayor's Office), the Legislative (City Council), and the Judicial Branch's Civil Courts (Court of Common Pleas).

The building is topped by an 11.3 m (37 ft), 27-ton bronze statue of city founder William Penn, one of 250 sculptures created by Alexander Milne Calder that adorn the building inside and out. The statue is the tallest atop any building in the world. 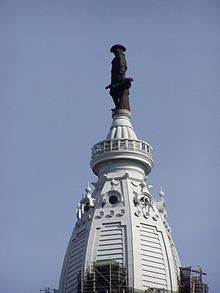 Calder wished the statue to face south so that its face would be lit by the sun most of the day, all the better to reveal the details that he had included in the work. The statue actually faces northeast, towards Penn Treaty Park in the Fishtown section of the city, which commemorates the site where William Penn signed a treaty with the local Native American tribe.[6] Beyond Penn Treaty Park is Pennsbury Manor, Penn's country home in Bucks County. Yet another version for why the statue pointed generally north instead of south is that it was the current (1894) architect's method of showing displeasure with the style of the work; that by 1894 it was not in the current, popular Beaux-Arts style; that it was out of date even before it was placed on top of the building.[citation needed] Starting during the 1990s, when one of Philadelphia's four major sports teams was close to winning a championship, the statue was decorated with the jersey of that team. 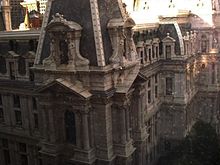 Close up of architecture of the upper northeast portion of the building. (2006)

The tower features clocks 8 m (26 ft) in diameter on all four sides of the metal portion of the tower. (larger than the Clock Tower, Palace of Westminster).[7]

The observation deck located directly below the base of the statue, approximately 152 m (499 ft) above street level, offers visitors an expansive view of the city and its surroundings. It is accessed via a 6-person elevator which has glass panels so visitors can see the wooden superstructure inside the tower. Stairs are also provided within the tower, but are only used for emergency exit. The ornamentation of the tower has been simplified, with huge garlands that originally festooned the top panels of the tower having been removed. Once enclosed with chain link fence, the observation deck now uses glass as its enclosure. It is currently the only publicly accessible observation deck in the city.

Penn's statue is hollow, and a narrow access tunnel through it leads to a small (22-inch-diameter) hatch atop the hat.

For many years, City Hall remained the tallest building in Philadelphia by the terms of a gentlemen's agreement that forbade any structure from rising above the William Penn statue atop City Hall. In 1987, it lost this distinction when One Liberty Place was completed. City Hall is still in the midst of a multi million dollar renovation that commenced in the mid 1980s. In the 1950s the city fathers investigated tearing down City Hall for a new building elsewhere. They found that the demolition would have bankrupted the city due to the building's extreme masonry construction.

City Hall is built on the area designated by William Penn as Centre Square. It was a public square from the city's founding in 1682 until the construction of City Hall began upon the site in 1871. It was one of the five original squares laid out on the city grid by Penn. It lay at the geographic heart of the city from 1682 until the Act of Consolidation, 1854 (although it was never the social heart of the city during that long period).

Penn planned for Centre Square to be:

However, the Delaware riverfront would remain the de facto economic and social heart of the city for more than a century.