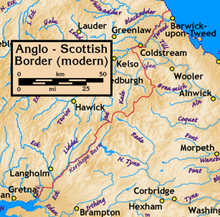 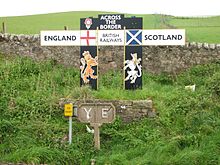 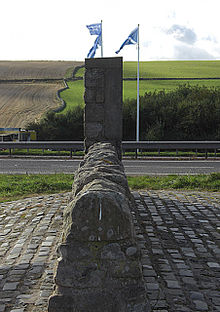 A boundary wall marking the border on the A1

A fence marking the border 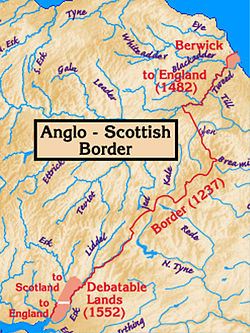 History of the border

The Anglo-Scottish border (or English-Scottish border) is the official border and mark of entry between Scotland and England. It runs for 154 km (96 miles) between the River Tweed on the east coast and the Solway Firth in the west. It is Scotland's only land border. England shares a longer border with Wales.

Although it had long been the de facto border, it was legally established in 1237, by the Treaty of York between England and Scotland,[1] with the exception of a small area around Berwick, which was taken by England in 1482. It is thus one of the oldest extant borders in the world, although Berwick was not initially fully annexed by England. (It was not included in Northumberland for parliamentary purposes until 1885.)

For centuries until the Union of the Crowns the region on either side of the boundary was a lawless territory suffering from the repeated raids in each direction of the Border Reivers.

Following the Treaty of Union 1707 which united Scotland and England to form the Kingdom of Great Britain, the Border continues to form the boundary of two distinct legal jurisdictions as the treaty between the two countries guaranteed the continued separation of English law and Scots law.[2]

The age of legal capacity under Scots law is 16, while it is 18 under English law. The border villages of Gretna Green, Coldstream Bridge and Lamberton were convenient for elopers from England who wanted to marry under Scottish laws, and marry without publicity.

The marine boundary was adjusted by the Scottish Adjacent Waters Boundaries Order 1999 so that the boundary within the territorial waters (up to the 12-mile (19 km) limit) is 0.09 km north of the boundary for oil installations established by the Civil Jurisdiction (Offshore Activities) Order 1987.[3]

The border is marked by signposts welcoming travellers both into Scotland and into England.

The border country, historically known as the Scottish Marches is the area either side of the Anglo-Scottish border including parts of the modern council areas of Dumfries and Galloway and the Scottish Borders, and parts of the English counties of Cumbria, County Durham and Northumberland. It is a hilly area, with the Scottish Southern Uplands to the north, and the Cheviot Hills forming the border between the two countries to the south. From the Norman conquest of England until the reign of James VI of Scotland, who also became James I of England, border clashes were common and the monarchs of both countries relied on Scottish Earls of March and Lord Warden of the Marches to defend and control the frontier region.

A 16th century Act of the Scottish Parliament talks about the chiefs of the border clans and a late 17th century statement by the Lord Advocate also uses both terms interchangeably. Although Lowland aristocrats may have increasingly liked to refer to themselves as 'families', the idea that the term 'clan' should be used of highland families alone is a 19th century convention.[4]

During late medieval and early modern eras—from the late 13th century, with the creation by Edward I of England of the first Lord Warden of the Marches to the early 17th century and the creation of the Middle Shires, promulgated after the personal union of England and Scotland under James VI of Scotland (James I of England)—the area around the border was known as the Scottish Marches.

For centuries the Marches on either side of the boundary was an area of mixed allegiances, where families or clans switched which country or side they supported as suited their family interests at that time, and lawlessness abounded. Before the two kingdoms were united as the Kingdom of Great Britain, the border clans would switch allegiance between the Scottish and English thrones depending on what was most favourable for the members of the clan. For a time a powerful local clan dominated a region on the border between England and Scotland. It was known as the Debatable Lands and neither monarch's writ was heeded.

King James VI & I decreed that the Borders should be renamed 'the Middle Shires'. In 1605 he established a single commission of ten drawn from equally Scotland and England to bring law and order to the region. Reivers could no longer escape justice by crossing from England to Scotland or vice versa.[5] The rough-and-ready Border Laws were abolished and the folk of the middle shires found they had to obey the law of the land like all other subjects.

In 1603 the King placed George Home, 1st Earl of Dunbar in charge of pacification of the borders. Courts were set up in the towns of the Middle Shires and known reivers were arrested. The more troublesome and lower classes were executed without trial; known as "Jeddart justice" (after the town of Jedburgh in Roxburghshire). Mass hanging soon became a common occurrence.

In 1607 James felt he could boast that "the Middle Shires" had "become the navel or umbilic of both kingdoms, planted and peopled with civility and riches". After ten years King James had succeeded; the Middle Shires had been brought under central law and order.

By the early 1620s the Borders were so peaceful that the Crown was able to scale down its operations.

Nevertheless, the Joint Commission continued it work, and as late as 25 September 1641 under King Charles II a local laird, Sir Richard Graham, was petitioning the Parliament of Scotland "for regulating the disorders in the borders".[6] 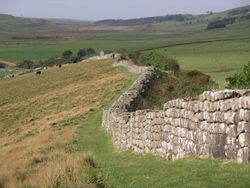 Sections of Hadrian's Wall near Greenhead and along the route, reconstructed in Victorian times. Other large sections have been dismantled over the years to use the stones for various nearby construction projects.

Hadrian's Wall, for centuries the boundary between Britannia (roughly modern England and Wales with the exception of the parts of England north of the wall) and Caledonia (modern Scotland) is often used as a popular reference to the border, especially in humorous contexts, although Britannia occasionally extended as far as the Antonine Wall. Hadrian's Wall lies to the south of the modern border, entirely in England.

List of places on the border, or strongly associated with it 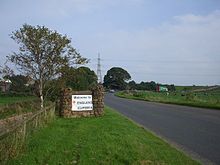 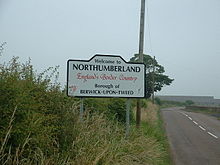 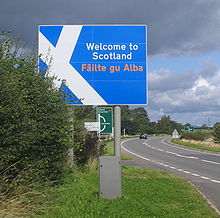 A sign marking entry to Scotland on the A7, on the border of Galloway

The bridge over the Tweed at Coldstream

Although the border has been amongst the most stable in history, it has not been without its controversies, notably the debatable lands and Berwick-upon-Tweed. Berwick only became properly annexed to Northumberland in the 19th century, and Berwickshire is in Scotland, while the town is in England (though both the town and lands up to the Firth of Forth belonged to the Kingdom of Northumbria in the Early Middle Ages).[7] Wendy Wood moved the border signs to the middle of the River Tweed as a protest.[8]

The debatable lands, on the other hand, were long a hideaway for criminals.