Trinity Hall, Cambridge
Not to be confused with Trinity College, Cambridge. 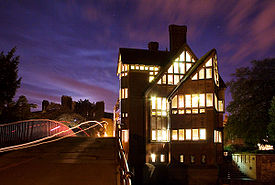 The Jerwood Library in Latham Court backs on to the River Cam next to Garret Hostel Bridge.

Trinity Hall is a constituent college of the University of Cambridge, England. It is the fifth-oldest college of the university, having been founded in 1350 by William Bateman, Bishop of Norwich.

The devastation caused by the Black Death plague of the 1340s caused the loss of nearly half of the English population; Bishop Bateman himself lost nearly 700 of his parish priests, and so his decision to found a college was probably centred around a need to rebuild the priesthood. Thus in the foundation of 1350, Bateman stated that the college's aim was "the promotion of divine worship and of canon and civil science and direction of the commonwealth and especially of our church and diocese of Norwich." This led the college to be particularly strong in legal studies, a tradition that has continued over the centuries.

The college site on the River Cam was originally obtained from the purchase of a house from John de Crauden to house the monks during their study, and the main court was built in the college's first few decades.

The chapel was licensed in 1352 and built in 1366, in the year that Pope Urban V granted the Master and Fellows permission to celebrate Mass in the college. In 1729, Sir Nathaniel Lloyd redecorated the chapel in what, despite subsequent enlargements, remains an intimate style, forming the smallest of the University's chapels. The painting in the chapel is Maso da San Friano's Salutation or Visitation, depicting Mary's visit to Elizabeth, mother of John the Baptist.

Like the chapel, the Hall of the college was rebuilt by Sir Nathaniel Lloyd and enlarged in the 19th century. It also remains one of the smallest and most intimate halls in the University.

The college library was built in the late sixteenth century, probably during the mastership of Thomas Preston and is now principally used for the storage of manuscripts and rare books. The new Jerwood Library overlooking the river was opened by Lord Howe in 1999.

The college also owns properties in the centre of Cambridge, on Bateman Street and Thompson's Lane, and on its Wychfield Site next to Fitzwilliam College.

Historically, Trinity Hall was known for being strong in Law; today, it has strengths not only in Law but across a range of academic subjects across the sciences, arts and humanities. Situated on the River Cam, nested between Clare College and Trinity College, the college is known for its friendly and unpretentious atmosphere. It also performs well at sport (e.g., rowing by its Boat Club) and has well-known musical and dramatic societies.[citation needed]

It is a relatively small institution when compared to its larger but younger neighbour, Trinity College, founded in 1546. At first all colleges in Cambridge were known as Halls or Houses (e.g., Pembroke College was called Pembroke Hall) and then later changed their names from Hall to College. However, when Henry VIII founded Trinity College, Cambridge next door, it became clear that Trinity Hall would continue being known as a Hall. This is also why it is incorrect to call it Trinity Hall College, although Trinity Hall college (lower case) is, strictly speaking, accurate. Interestingly a similar situation existed once before in the history of the University, when Henry VI founded King's College (in 1441) despite the existence of King's Hall (founded in 1317). King's Hall was later dissolved in the foundation of Trinity College in 1546. 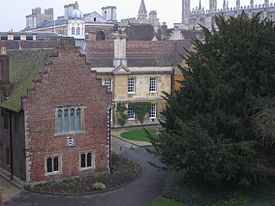 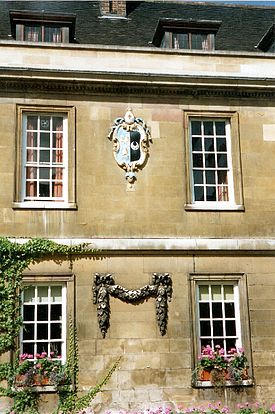 Many Cambridge and Oxford Colleges are informally 'paired' with one another. Trinity Hall is paired both with All Souls College, Oxford and University College, Oxford.