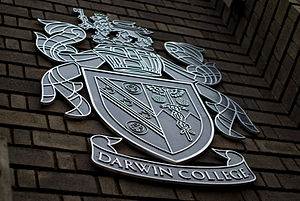 Darwin College's Coat of Arm on the main gate

Darwin College is a constituent college of the University of Cambridge. It is a college for advanced study, admitting only postgraduate students.

Founded in 1964, Darwin was Cambridge University's first graduate-only college, and also the first to admit both men and women. The college is named after the family of one of the university's most famous graduates, Charles Darwin. The Darwin family previously owned some of the land on which the college now sits.

The college has around 600 students, mostly studying for PhD or MPhil degrees. About half the students come from outside the United Kingdom. Darwin is the largest of Cambridge's five graduate colleges and has the largest number of graduate students of any Cambridge college.

A significant increase in the number of postgraduate students at Cambridge University in the post-war period led to a growing realisation that a graduate college was becoming a necessity. In 1963, three of the university's older colleges – Trinity College, St John's College, and Gonville and Caius College – announced their intention to jointly form a new, wholly graduate college. The college was formed in 1964, located on the bank of the River Cam, adjacent to Queens' College. On 29 January 1965, the Privy Council gave formal approval to the college as an Approved Foundation. It received its Royal Charter as an independent college within the university in 1976.

The college is named after the family of Charles Darwin, which previously owned some of the property which the college now occupies. Charles Darwin's second son, George Darwin, bought Newnham Grange, the oldest part of the college, in 1885, also acquiring the adjacent building known as the Old Granary and Small Island. (Newnham Grange was originally built in 1793 for the family of Patrick Beales, a local corn and coal merchant. It was extensively remodelled by George Darwin.) Following the death of George's son, Sir Charles Galton Darwin, in 1962, those concerned with the foundation of the new college learned that the property was to become available. Lady Darwin and her family were very receptive to the idea of their home becoming the nucleus of a new college, and to the suggestion that it should bear the family's name. Family portraits of the Darwin family have been lent to the college and can be found on the walls of several of the college's main rooms. In the book Period Piece: A Cambridge Childhood, the niece of Charles Darwin, Gwen Raverat describes how she grew up at Newnham Grange.

In 1966, the college also acquired the Hermitage (a house built in the nineteenth century on the west side of Newnham Grange) from St John's College. Work to convert and extend the college's buildings was funded by the founding colleges and substantial donations from the Rayne Foundation.

In 1994, Darwin College completed construction of a new library and study centre along the side of the Granary. The centre is built on a narrow strip of land alongside the millpond in Cambridge, and uses a structure of green oak and lime mortar brickwork. The building uses high-level automatically opening windows and a chimney to control natural ventilation. The building has also been designed with special connections which could be tightened to account for the shrinkage.

The college organizes the annual Darwin Lecture Series, eight talks over eight weeks structured around a single theme (such as 'Power') examined from very different perspectives (scientific, humanities, arts), given by eminent speakers who are leading international authorities in their fields. The lectures have been hosted for over twenty-five years and form one of the key events in the Cambridge calendar. Most of the series of lectures have been published as books.

Darwin College Boat Club is a popular student society at Darwin College. With a strong progression over the past few years, the club is one of the most successful graduate rowing clubs in the UK.

Darwin College Football Club play in the long established Cambridge University Association Football League (CUAFL), representing the only graduate college within CUAFL. The club plays throughout the year in and out of term.

Every Darwinian is automatically a member of the Darwin College Student Association (DCSA). The DCSA committee comprises 20 students, which organize events, parties, support societies and help students make the most of their time in Cambridge.[1]

Elizabeth Blackburn, the 2009 Nobel laureate in medicine, studied for her PhD at Darwin. Dian Fossey and Sir Ian Wilmut are alumni. Paul Clement, the former United States Solicitor General, read the MPhil in Politics and Economics at Darwin in 1988-89. In recent years, the Canadian TV host Seamus O'Regan studied at the college.

César Milstein, who received the 1984 Nobel Prize in Physiology or Medicine, was a Fellow of Darwin College from 1980 to 2002. Sir Karl Popper and the Nobel Prize winner Max Perutz were Honorary Fellows, as are Amartya Sen and Martin Rees (The Lord Rees of Ludlow). Oliver Letwin was a research Fellow from 1981 to 1982.