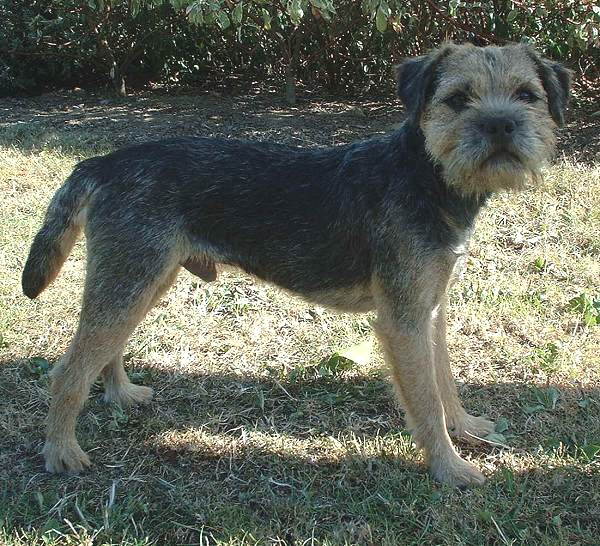 Though the breed is much older, the Border Terrier was officially recognized by the in Great Britain in 1920, and by the (AKC) in 1930.

Identifiable by their -shaped heads [ [http://www.akc.org/breeds/border_terrier/index.cfm"AKC breed standard"] ] , Border Terriers have a broad skull and short, strong muzzle with a scissors bite. The V-shaped ears are on the sides of the head and fall towards the cheeks. Acceptable colours are grizzle-and-tan, blue-and-tan, red grizzle, and wheaten, all colours with a dark muzzle preferred. White is not allowed, except for a small patch on the chest. Whiskers are few and short. The tail is naturally moderately short, thick at the base and tapering. [ [http://www.akc.org/breeds/border_terrier/index.cfm"AKC breed standard"] ]

The Border Terrier has a consisting of a short, dense, soft and harsh, wiry weather and dirt resistant, close-lying with no curl or wave. This coat usually requires twice a year to remove dead hair. It then takes about eight weeks for the top coat to come back in. For some dogs, weekly brushing will suffice.

Border Terriers generally get along well with other dogs; however, if they dislike another dog, they do not hesitate to start a fight and, as with most terriers, it can be difficult to stop them. They seem to be better with the opposite gender of what gender they are.

They will get along well with cats they have been raised with, but may chase other cats and small animals such as mice, rabbits, squirrels, rats, and guinea pigs.

Borders will adapt to the activity levels of their owners. They do not demand exercise, but do love it when they get it. With sufficient length of leg to achieve reasonable speed, a Border will hike, bike, and run with its owner but just as happily while away the day lying in the sun. A Border Terrier does not mind being left alone but as it is intelligent and loves company, it is not suited to a household where people are away all day, every day (four hours is enough for a dog of its size). They are also known to be good jumping dogs.

Being bred to work cooperatively with people, Borders do well in task-oriented activities. They are intelligent and eager to please, but they retain the capacity for independent thinking and initiative that were bred into them for working rats and fox underground. They take training for tasks very well, but appear less tractable if being taught mere tricks. The breed has excelled in agility training, but they are quicker to learn jumps and see-saws than weaving poles. Their love of people and even temperament make them fine therapy dogs, especially for children and the elderly, and they are occasionally used to aid the blind or deaf. From a young age you should train your border on command.

Borders can adapt to different environments and situations well, and are able to deal with temporary change well.

Borders are a generally hardy breed, though there are certain genetic health problems associated with them, including:

Border Terriers are also known to be sensitive to anesthetics and slow to induce.

Due to their instinct to kill and consume smaller animals, Border Terriers often destroy, and sometimes eat, toys that are insufficiently robust. Indigestion resulting from eating a toy can cause the appearance of illness. Typical symptoms include lethargy, unwillingness to play, a generally 'unhappy' appearance, lack of reaction to affection, and inability or unwillingness to sleep. These symptoms are generally very noticeable, however, they are also present just prior to Border Terrier bitches being on heat. They are strong willed and very lively also they like running.

More Border Terriers have earned American Kennel Club (AKC) Earthdog titles than any other terrier. An AKC is not true hunting, but an artificial, non-competitive, exercise in which terriers enter 9" x 9" smooth wooden tunnels, buried under-ground, with one or more turns in order to bark or scratch at caged rats that are safely housed behind wooden bars. The tests are conducted to determine that instinctive traits are preserved and developed, as the breed originators intended for the dogs to their work. While earthdog tests are not a close approximation of hunting, they are popular in the U.S. and in some European countries because even over-large Kennel Club breeds can negotiate the tunnels with ease, dogs can come to no harm while working, and no digging is required. Since Border Terriers are "essentially working terriers", many Border Terrier owners consider it important to test and develop their dogs instinct. These tests also provide great satisfaction for the dogs. The American Working Terrier Association (AWTA) does conduct "trials"; where the dogs instincts are tested, and then judged to determine a "Best of Breed" Earthdog. These trials are also run similar as described above.

The Border Terrier originates in, and takes its name from, the area near the border between and . Their original purpose was to kill foxes and rodents, but they have been used to hunt otters and s too. The first Kennel Club Border Terrier ever registered was The Moss Trooper, a dog sired by Jacob Robinson's Chip in 1912 and registered in the Kennel Club's listing in 1913. The Border Terrier was rejected for formal Kennel Club recognition in 1914, but won its slot in 1920, with the first standard being written by Jacob Robinson and John Dodd. Jasper Dodd was made first President of the Club.