Cuddington is a civil parish and rural village in the unitary authority of Cheshire West and Chester and the ceremonial county of Cheshire, England, about six miles west of Northwich and fourteen miles east of Chester.

The name Cuddington is Anglo Saxon and derives from The Tun of Cuda which translates to The People of Cuda. Cuddington was designated as a township in the 7th Century AD when the then Archbishop of Canterbury (Theodore) introduced the parochial system within the Parish of Weaverham. Cuddington's church was first set up as a chapel of ease, to save people having to walk all the way to Weaverham every Sunday. In ancient times the village was famed for its medicinal spring that has since been lost.

Cuddington and Sandiway have been villages since the Forest of and Mondrem covered an area from Frodsham and the Mersey all the way towards Nantwich. There is a Bronze Age burial ground in Norley another local village and Iron Age hill forts at Eddisbury and Oakmere, the ancient highway of Peytefinsty, linking Weaverham with Tarporley and many other local Roman roads confirm the age of the village. 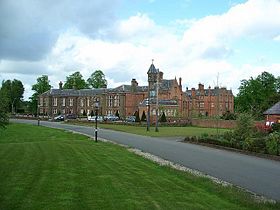 Vale Royal Abbey as it is today. The Tudor and later mansion is built around the core of the mediaeval south and west ranges of the former cloister and contains surviving rooms including the abbot's great hall.

The early history of Cuddington and Sandiway is also closely associated with Vale Royal Abbey, at nearby Whitegate, once the largest Cistercian abbey church in Britain. Sandiway's most famous building is the "Round Tower Lodge" which was built in the early 19th century as the gatehouse to Vale Royal Abbey. The 18foot high tower is said to have a concealed dungeon which was used as a hiding place by King Charles II. At that time it stood on a quiet country lane but the road became increasingly important and the tower is now a unique landmark in the central reservation of the A556. Now a listed building with a castellated top and bricked up gothic windows, it was a residence until the 1920s and had a single story extension to its east wall which has since been removed. 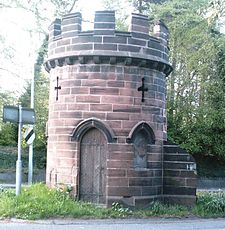 The Round Tower Lodge

Very near the round tower is the Blue Cap Inn which is named after a fox hound. The Cheshire Hounds' kennels were built in Sandiway in 1798, to be replaced in 1834, on the same site, by a new establishment, the Cheshire Forest Kennels. Bluecap was a foxhound owned by Mr John Smith-Barry and in 1762 took part in a famous race, at Newmarket, for a 500-guinea wager with Hugo Meynell, the Master of the Quorn Hunt. Bluecap prevailed and became a local hero and a monument to him stands at the Cheshire Kennels.

The railway transformed the village linking it with Manchester and Chester as well as Winsford with the Whitegate way (now closed and used by walkers, cyclists and as a bridleway). The new railway opened to passengers in 1870 shops and businesses grew up around the station. Wealthy commuters, from Manchester, Chester and Northwich, moved to the village increasing the population and changing its location for the merging in 1935. 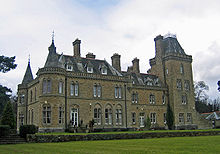 The wealth of these commuters can be seen in the grand houses that were built in the area. Many of the village's fine houses were designed by John Douglas who was born in Sandiway, at Park Cottage. He is regarded as one of the outstanding architects of his generation and was an unrivalled master of church design. St John's Church, Sandiway, is built on the site of which he donated to the village. He was also responsible for much of Victorian Chester including the design of the famous Eastgate Clock. Other houses in the village include Hefferson Grange, Dalefords Manor, Gorstage Hall, Sandiway Lodge, Overdale, Nunsmere Hall, Sandiway Manor, Littlefold, Pettypool House and Oakmere Hall (1867).

Nowadays Cuddington is a mainly residential village popular for its peaceful rural location and good transport links. The village is surrounded by fields and woodland with many public footpaths (like the whitegate way) and the nearby ancient Delamere Forest is popular with walkers and cyclists. With a station on the railway linking Chester with Manchester situated on the crossing of two main trunk roads, Cuddington is within easy reach of the nearby cities and the UK motorway network.

Many of the homes above have now become residential homes for the elderly. Petty Pool and however has become an outdoor activity centre and college run by the petty pool trust.

Situated in Sandiway the craft centre was once a farm and after converting to a craft centre has attracted many visitors to the area with over 25 shops including a candle shop; eclectic art teddy bears traditional toys and games, chess sets, carved and turned wood items and handmade cards to mention but a few. There is an aquatic and Falconry centre and garden centre.

The Wilbraham family lived in the area in Delamere House from 1784-1939. Where this house once stood is now known as Delamere Park which is now a prominent housing estate.

John Douglas (1830–1911) architect responsible for over 500 or so buildings across Cheshire, north Wales and the North West including many of Chester's black-and-white half-timbered buildings and the world famous Eastgate Clock. He also build the Church in Sandiway on land he gave to the village.

Olympic silver medalist Shirley Strong was born in Cuddington and lived in the village throughout her career. Bob Carolgees famous for Tiswas and spit the dog used to live on Kennel lane in Sandiway. Gary Barlow of Take That fame once resided on the outskirts of Cuddington at Delamere Manor which was originally the home of the Wilbraham family.