If the wind in blows parallel to the coast in the southern hemisphere (such as along the coast of Peru, where the wind blows North), then Ekman transport produces a net movement of surface water 90 degrees to the left. This can result in coastal upwelling.

Upwelling is an oceanographic phenomenon that involves wind-driven motion of dense, cooler, and usually nutrient-rich water towards the ocean surface, replacing the warmer, usually nutrient-depleted surface water. The increased availability in upwelling regions results in high levels of primary productivity and thus fishery production. Approximately 25% of the total global marine fish catches come from five upwellings that occupy only 5% of the total ocean area. [1] Upwellings that are driven by coastal currents or diverging open ocean have the greatest impact on nutrient-enriched waters and global fishery yields. [1] [2]

In the the northern hemisphere, coastal upwelling can be induced by the Ekman transport generating a current 90 degrees to the right.

Coastal upwelling is the best known type of upwelling, and the most closely related to human activities as it supports some of the most productive fisheries in the world. Wind-driven currents are diverted to the right of the winds in the Northern Hemisphere and to the left in the Southern Hemisphere due to the Coriolis effect. The result is a net movement of surface water at right angles to the direction of the wind, known as the Ekman transport (See also Ekman Spiral). When Ekman transport is occurring away from the coast, surface waters moving away are replaced by deeper, colder, and denser water. [2]

Deep waters are rich in nutrients, including nitrate and phosphate, themselves the result of decomposition of sinking organic matter (dead/detrital plankton) from surface waters. When brought to the surface, these nutrients are utilized by phytoplankton, along with dissolved CO2 (carbon dioxide) and light energy from the sun, to produce organic compounds, through the process of photosynthesis. Upwelling regions therefore result in very high levels of primary production (the amount of carbon fixed by phytoplankton) in comparison to other areas of the ocean. High primary production propagates up the food chain because phytoplankton are at the base of the oceanic food chain.[3] 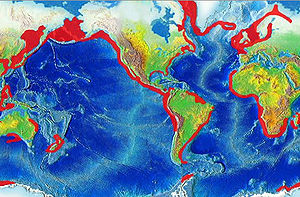 Areas of coastal upwelling in red.

The food chain follows the course of:

Upwelling at the equator is associated with the Intertropical Convergence Zone (ITCZ) which actually moves, and consequently, is often located north or south of the equator. Easterly (westward) winds blowing along the ITCZ in both the Pacific and Atlantic Basins drive water to the right (northwards) in the Northern Hemisphere and to the left (southwards) in the Southern Hemisphere. If the ITCZ is displaced above the equator, the wind south of it becomes a southwesterly wind which drives water to its right or southeasterly, away from the ITCZ. Whatever its location, this results in a divergence, with denser, nutrient-rich water being upwelled from below, and results in the remarkable fact that the equatorial region in the Pacific can be detected from space as a broad line of high phytoplankton concentration. [1] 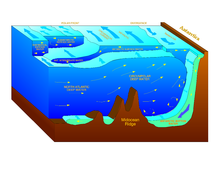 Upwelling in the Southern Ocean

Large-scale upwelling is also found in the Southern Ocean. Here, strong westerly (eastward) winds blow around Antarctica, driving a significant flow of water northwards. This is actually a type of coastal upwelling. Since there are no continents in a band of open latitudes between South America and the tip of the Antarctic Peninsula, some of this water is drawn up from great depths. In many numerical models and observational syntheses, the Southern Ocean upwelling represents the primary means by which deep dense water is brought to the surface. Shallower, wind-driven upwelling is also found in off the west coasts of North and South America, northwest and southwest Africa, and southwest Australia, all associated with oceanic subtropical high pressure circulations (see coastal upwelling above).

Some models of the ocean circulation suggest that broad-scale upwelling occurs in the tropics, as pressure driven flows converge water toward the low latitudes where it is diffusively warmed from above. The required diffusion coefficients, however, appear to be larger than are observed in the real ocean. Nonetheless, some diffusive upwelling does probably occur.

Upwelling intensity depends on wind strength and seasonal variability, as well as the vertical structure of the water, variations in the bottom bathymetry, and instabilities in the currents.

In some areas, upwelling is a seasonal event leading to periodic bursts of productivity similar to spring blooms in coastal waters. Wind-induced upwelling is generated by temperature differences between the warm, light air above the land and the cooler denser air over the sea. In temperate latitudes, the temperature contrast is greatly seasonably variable, creating periods of strong upwelling in the spring and summer, to weak or no upwelling in the winter. For example, off the coast of Oregon, there are four or five strong upwelling events separated by periods of little to no upwelling during the six month season of upwelling. In contrast, tropical latitudes have a more constant temperature contrast, creating constant upwelling throughout the year. The Peruvian upwelling, for instance, occurs throughout most of the year, resulting in one of the world's largest marine fisheries for sardines and anchovies. [2]

In anomalous years when the trade winds weaken or reverse, the water that is upwelled is much warmer and low in nutrients, resulting in a sharp reduction in the biomass and phytoplankton productivity. This event is known as the El Nino-Southern Oscillation (ENSO) event. The Peruvian upwelling system is particularly vulnerable to ENSO events, and can cause extreme interannual variability in productivity. [2]

Changes in bathymetry can affect the strength of an upwelling. For example, a submarine ridge that extends out from the coast will produce more favorable upwelling conditions than neighboring regions. Upwelling typically begins at such ridges and remains strongest at the ridge even after developing in other locations.[2]