MSY is extensively used for fisheries management. Unlike the logistic (Schaefer) model,[1] MSY has been refined in most modern fisheries models and occurs at around 30% of the unexploited population size. This fraction differs among populations depending on the life history of the species and the age-specific selectivity of the fishing method.

However, the approach has been widely criticized as ignoring several key factors involved in fisheries management and has led to the devastating collapse of many fisheries. As a simple calculation, it ignores the size and age of the animal being taken, its reproductive status, and it focuses solely on the species in question, ignoring the damage to the ecosystem caused by the designated level of exploitation and the issue of bycatch. Among conservation biologists it is widely regarded as dangerous and misused.[2][3]

The concept of MSY as a fisheries management strategy developed in the early 1930s.[4][5][6] It increased in popularity in the 1950s with the advent of surplus-production models with explicitly estimate MSY.[1] As an apparently simple and logical management goal, combined with the lack of other simple management goals of the time, MSY was adopted as the primary management goal by several international organizations (e.g., IWC, IATTC,[7] ICCAT, ICNAF), and individual countries.[8]

Between 1949 and 1955, the U.S. maneuvered to have MSY declared the goal of international fisheries management (Johnson 2007). The international MSY treaty that was eventually adopted in 1955 gave foreign fleets the right to fish off any coast. Nations that wanted to exclude foreign boats had to first prove that its fish were overfished.[9]

As experience was gained with the model, it became apparent to some researchers that it lacked the capability to deal with the real world operational complexities and the influence of trophic and other interactions. In 1977, Larkin wrote its epitaph, challenging the goal of maximum sustained yield on several grounds: It put populations at too much risk; it did not account for spatial variability in productivity; it did not account for species other than the focus of the fishery; it considered only the benefits, not the costs, of fishing; and it was sensitive to political pressure.[10] In fact, none of these criticisms was aimed at sustainability as a goal. The first one noted that seeking the absolute MSY with uncertain parameters was risky. The rest point out that the goal of MSY was not holistic; it left out too many relevant features.[9]

Some managers began to use more conservative quota recommendations, but the influence of the MSY model for fisheries management still prevailed. Even while the scientific community was beginning to question the appropriateness and effectiveness of MSY as a management goal,[10][11] it was incorporated into the 1982 United Nations Convention for the Law of the Sea, thus ensuring its integration into national and international fisheries acts and laws.[8] According to Walters and Maguire, an ‘‘institutional juggernaut had been set in motion’’, climaxing in the early 1990s with the collapse of northern cod.[12]

The key assumption behind all sustainable harvesting models such as MSY is that populations of organisms grow and replace themselves – that is, they are renewable resources. Additionally it is assumed that because the growth rates, survival rates, and reproductive rates increase when harvesting reduces population density,[4] they produce a surplus of biomass that can be harvested. Otherwise, sustainable harvest would not be possible. 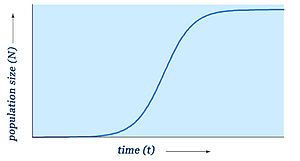 The logistic model (or logistic function) is a function that is used to describe bounded population growth under the previous two assumptions. The logistic function is bounded at both extremes: when there are not individuals to reproduce, and when there is an equilibrium number of individuals (i.e., at carrying capacity). Under the logistic model, population growth rate between these two limits is most often assumed to be sigmoidal (Figure 1). There is scientific evidence that some populations do grow in a logistic fashion towards a stable equilibrium – a commonly cited example is the logistic growth of yeast.

The equation describing logistic growth is:[14]

The parameter values are:

K=The carrying capacity of the population

From the logistic function, the population size at any point can be calculated as long as r, K, and N0 are known. 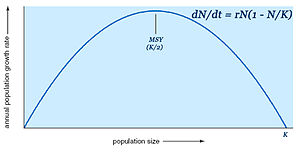 Differentiating equation 1.1 give an expression for how the rate of population increases as t increases. At first, the population growth rate is fast, but it begins to slow as times goes on until it levels off to the maximum growth rate, after which it begins to decrease (figure 2).

can be understood as the change in population (N) with respect to a change in time (t). Equation 1.2 is the usual way in which logistic growth is represented mathematically and has several important features. First, at very low population sizes, the value of 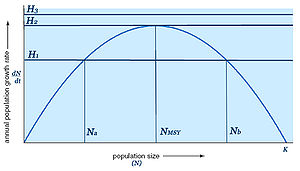 The simplest way to model harvesting is to modify the logistic equation so that a certain number of individuals is continuously removed:[17]

. This occurs when the population growth rate is the same as the harvest rate:

Figure 3 shows how growth rate varies with population density. For low densities (far from carrying capacity), there is little addition (or “recruitment”) to the population, simply because there are few organisms to give birth. At high densities, though, there is intense competition for resources, and growth rate is again low because the death rate is high. In between these two extremes, the population growth rate rises to a maximum value (NMSY). This maximum point represents the maximum number of individuals that can be added to a population by natural processes. If more individuals than this are removed from the population, the population is at risk for decline to extinction.[18] The maximum number that can be harvested in a sustainable manner, called the maximum sustainable yield, is given by this maximum point.

The formula for maximum sustained harvest (H) is one-fourth the maximum population or carrying capacity (K) times the intrinsic rate of growth (r).[21]

MSY has been especially influential in the management of renewable biological resources such as commercially important fish and wildlife. In fisheries terms, maximum sustainable yield (MSY) is the largest average catch that can be captured from a stock under existing environmental conditions.[24] MSY aims at a balance between too much and too little harvest to keep the population at some intermediate abundance with a maximum replacement rate.

Relating to MSY, the maximum economic yield (MEY) is the level of catch that provides the maximum net economic benefits or profits to society.[25][26] Like optimum sustainable yield, MEY is usually less than MSY.

Although it is widely practiced by state and federal government agencies regulating wildlife, forests, and fishing, MSY has come under heavy criticism by ecologists and others from both theoretical and practical reasons.[27] The concept of maximum sustainable yield is not always easy to apply in practice. Estimation problems arise due to poor assumptions in some models and lack of reliability of the data.[8][28] Biologists, for example, do not always have enough data to make a clear determination of the population’s size and growth rate. Calculating the point at which a population begins to slow from competition is also very difficult. The concept of MSY also tends to treat all individuals in the population as identical, thereby ignoring all aspects of population structure such as size or age classes and their differential rates of growth, survival, and reproduction.[28]

As a management goal, the static interpretation of MSY (i.e., MSY as a fixed catch that can be taken year after year) is generally not appropriate because it ignores the fact that fish populations undergo natural fluctuations (i.e., MSY treats the environment as unvarying) in abundance and will usually ultimately become severely depleted under a constant-catch strategy.[28] Thus, most fisheries scientists now interpret MSY in a more dynamic sense as the maximum average yield (MAY) obtained by applying a specific harvesting strategy to a fluctuating resource.[8]

An example of errors in estimating the population dynamics of a species occurred with in the New Zealand Orange roughy fishery. Early quotas were based on an assumption that the orange roughy had a fairly short lifespan and bred relatively quickly. However, it was later discovered that the orange roughy lived a long time and had bred slowly (~30 years). By this stage stocks had been largely depleted.[citation needed]

In recent years however, an accelerating decline has been observed in the productivity of many important fisheries.[29] Fisheries which have been devastated in recent times include (but are not limited too) the great whale fisheries, the Grand Bank fisheries of the western Atlantic, and the Peruvian anchovy fishery.[30] Recent assessments by the United Nations Food and Agriculture Organization (FAO) of the state of the world’s fisheries indicate a levelling off of landings in the 1990s, at about 100 million tons. [31]

In addition, the composition of global catches has changed.[32] As fishers deplete larger, long-lived predatory fish species such as cod, tuna, shark, and snapper, they move down to the next level – to species that tend to be smaller, shorter-lived, and less valuable.[citation needed]

Overfishing is a classic example of the tragedy of the commons.[30]

In population ecology and economics, optimum sustainable yield is the level of effort (LOE) that maximizes the difference between total revenue and total cost. Or, where marginal revenue equals marginal cost. This level of effort maximizes the economic profit, or rent, of the resource being utilized. It usually corresponds to an effort level lower than that of maximum sustainable yield. In environmental science, optimum sustainable yield is the largest economical yield of a renewable resource achievable over a long time period without decreasing the ability of the population or its environment to support the continuation of this level of yield.