In fluid dynamics, wind waves or, more precisely, wind-generated waves are surface waves that occur on the free surface of oceans, seas, lakes, rivers, and canals or even on small puddles and ponds. They usually result from the wind blowing over a vast enough stretch of fluid surface. Waves in the oceans can travel thousands of miles before reaching land. Wind waves range in size from small ripples to huge waves over 30 meters high.[1][2] When directly being generated and affected by the local winds, a wind wave system is called a wind sea. After the wind ceases to blow, wind waves are called swell. Or, more generally, a swell consists of wind generated waves that are not—or hardly—affected by the local wind at that time. They have been generated elsewhere, or some time ago.[3] Wind waves in the ocean are called ocean surface waves.

Tsunamis are a specific type of wave not caused by wind but by geological effects. In deep water, tsunamis are not visible because they are small in height and very long in wavelength. They may grow to devastating proportions at the coast due to reduced water depth. 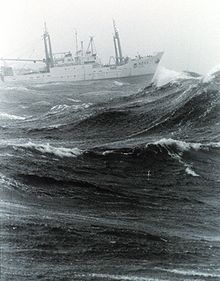 The great majority of large breakers one observes on a beach result from distant winds. Five factors influence the formation of wind waves:[4]

All of these factors work together to determine the size of wind waves. The greater each of the variables, the larger the waves. Waves are characterized by:

Waves in a given area typically have a range of heights. For weather reporting and for scientific analysis of wind wave statistics, their characteristic height over a period of time is usually expressed as significant wave height. This figure represents an average height of the highest one-third of the waves in a given time period (usually chosen somewhere in the range from 20 minutes to twelve hours), or in a specific wave or storm system. Given the variability of wave height, the largest individual waves are likely to be about twice the reported significant wave height for a particular day or storm.[5]

Ripples appear on smooth water when the wind blows, but will die quickly if the wind stops. The restoring force that allows them to propagate is surface tension. Seas are the larger-scale, often irregular motions that form under sustained winds. They tend to last much longer, even after the wind has died, and the restoring force that allows them to persist is gravity. As seas propagate away from their area of origin, they naturally separate according to their direction and wavelength. The regular wave motions formed in this way are known as swells.

Individual "rogue waves" (also called "freak waves", "monster waves", "killer waves", and "king waves") much higher than the other waves in the sea state can occur. In the case of the Draupner wave, its 25 m (82 ft) height was 2.2 times the significant wave height. Such waves are distinct from tides, caused by the Moon and Sun's gravitational pull, tsunamis that are caused by underwater earthquakes or landslides, and waves generated by underwater explosions or the fall of meteorites—all having far longer wavelengths than wind waves. 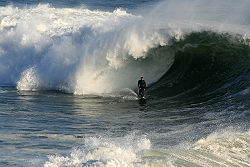 Some waves undergo a phenomenon called "breaking". A breaking wave is one whose base can no longer support its top, causing it to collapse. A wave breaks when it runs into shallow water, or when two wave systems oppose and combine forces. When the slope, or steepness ratio, of a wave is too great, breaking is inevitable.

Individual waves in deep water break when the wave steepness—the ratio of the wave height H to the wavelength λ—exceeds about 0.17, so for H > 0.17 λ. In shallow water, with the water depth small compared to the wavelength, the individual waves break when their wave height H is larger than 0.8 times the water depth h, that is H > 0.8 h.[7] Waves can also break if the wind grows strong enough to blow the crest off the base of the wave.

Three main types of breaking waves are identified by surfers or surf lifesavers. Their varying characteristics make them more or less suitable for surfing, and present different dangers.

Wind waves are mechanical waves that propagate along the interface between water and air; the restoring force is provided by gravity, and so they are often referred to as surface gravity waves. As the wind blows, pressure and friction forces perturb the equilibrium of the water surface. These forces transfer energy from the air to the water, forming waves. The initial formation of waves by the wind is described in the theory of Phillips from 1957, and the subsequent growth of the small waves has been modeled by Miles, also in 1957.[8][9] 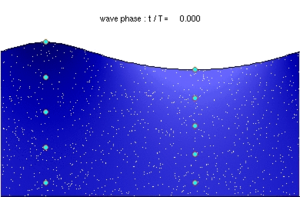 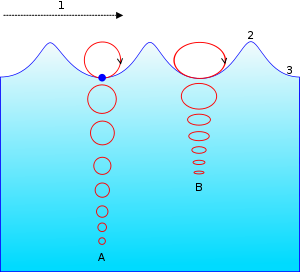 Motion of a particle in a wind wave.
A = At deep water. The orbital motion of fluid particles decreases rapidly with increasing depth below the surface.
B = At shallow water (sea floor is now at B). The elliptical movement of a fluid particle flattens with decreasing depth.
1 = Propagation direction.
2 = Wave crest.
3 = Wave trough.
See also: Airy wave theory

In the case of monochromatic linear plane waves in deep water, particles near the surface move in circular paths, making wind waves a combination of longitudinal (back and forth) and transverse (up and down) wave motions. When waves propagate in shallow water, (where the depth is less than half the wavelength) the particle trajectories are compressed into ellipses.[10][11]

As the wave amplitude (height) increases, the particle paths no longer form closed orbits; rather, after the passage of each crest, particles are displaced slightly from their previous positions, a phenomenon known as Stokes drift.[12][13]

As the depth below the free surface increases, the radius of the circular motion decreases. At a depth equal to half the wavelength λ, the orbital movement has decayed to less than 5% of its value at the surface. The phase speed of the surface wave (also called the celerity) is well approximated by

In deep water, where

and the hyperbolic tangent approaches 1, the speed c, in m/s, approximates

, when λ is measured in metres. This expression tells us that waves of different wavelengths travel at different speeds. The fastest waves in a storm are the ones with the longest wavelength. As a result, after a storm, the first waves to arrive on the coast are the long-wavelength swells.

When several wave trains are present, as is always the case in nature, the waves form groups. In deep water the groups travel at a group velocity which is half of the phase speed.[14] Following a single wave in a group one can see the wave appearing at the back of the group, growing and finally disappearing at the front of the group.

As the water depth d decreases towards the coast, this will have an effect: wave height changes due to wave shoaling and refraction. As the wave height increases, the wave may become unstable when the crest of the wave moves faster than the trough. This causes surf, a breaking of the waves.

The movement of wind waves can be captured by wave energy devices. The energy density (per unit area) of regular sinusoidal waves depends on the water density ρ, gravity acceleration g and the wave height H (which, for regular waves, is equal to twice the amplitude, a):

The velocity of propagation of this energy is the group velocity.

Surfers are very interested in the wave forecasts. There are many websites that provide predictions of the surf quality for the upcoming days and weeks. Wind wave models are driven by more general weather models that predict the winds and pressures over the oceans, seas and lakes.

Wind wave models are also an important part of examining the impact of shore protection and beach nourishment proposals. For many beach areas there is only patchy information about the wave climate, therefore estimating the effect of wind waves is important for managing littoral environments.