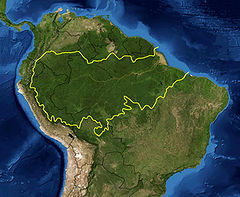 A map location of the Amazon Rainforest ecoregions. The yellow line encloses the ecoregions per the World Wide Fund for Nature.

An ecoregion (ecological region), sometimes called a bioregion, is an ecologically and geographically defined area that is smaller than an ecozone and larger than an ecosystem. Ecoregions cover relatively large areas of land or water, and contain characteristic, geographically distinct assemblages of natural communities and species. The biodiversity of flora, fauna and ecosystems that characterise an ecoregion tends to be distinct from that of other ecoregions. In theory, biodiversity or conservation ecoregions are relatively large areas of land or water where the probability of encounter of different species and communities at any given point remain relatively constant, within an acceptable range of variation (largely undefined at this point). Three caveats are appropriate for all biogeographic mapping approaches. Firstly, no single biogeographic framework is optimal for all taxa. Ecoregions reflect the best compromise for as many taxa as possible. Secondly, ecoregion boundaries rarely form abrupt edges; rather, ecotones and mosaic habitats bound them. Thirdly, most ecoregions contain habitats that differ from their assigned biome. 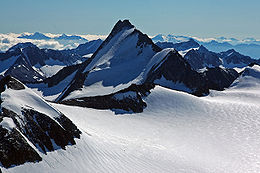 The Ötztal Alps, a mountain range in the central Alps of Europe, are part of the Central Eastern Alps, and can both be termed as ecoregions. 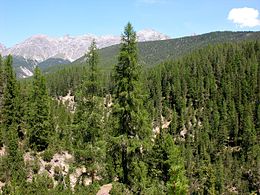 A conifer forest in the Swiss Alps (National Park).

An ecoregion is a "recurring pattern of ecosystems associated with characteristic combinations of soil and landform that characterise that region"[1] Omernik (2004), elaborates on this by defining ecoregions as: “areas within which there is spatial coincidence in characteristics of geographical phenomena associated with differences in the quality, health, and integrity of ecosystems”[2] “Characteristics of geographical phenomena” may include geology, physiography, vegetation, climate, hydrology, terrestrial and aquatic fauna, and soils, and may or may not include the impacts of human activity (e.g. land use patterns, vegetation changes). There is significant, but not absolute, spatial correlation among these characteristics, making the delineation of ecoregions an imperfect science. Another complication is that environmental conditions across an ecoregion boundary may change very gradually, e.g. the prairie-forest transition in the midwestern United States, making it difficult to identify an exact dividing boundary. Such transition zones are called ecotones.

Ecoregions can be categorized using an algorithmic approach or a holistic, “weight-of-evidence” approach where the importance of various factors may vary. An example of the algorithmic approach is Robert Bailey’s work for the U.S. Forest Service, which uses a hierarchical classification that first divides land areas into very large regions based on climatic factors, and subdivides these regions, based first on dominant potential vegetation, and then by geomorphology and soil characteristics. The weight-of-evidence approach is exemplified by James Omernik’s work for the United States Environmental Protection Agency, subsequently adopted (with modification) for North America by the Commission for Environmental Cooperation.

The intended purpose of ecoregion delineation may affect the method used. For example, the WWF ecoregions were developed to aid in biodiversity conservation planning, and place a greater emphasis than the Omernik or Bailey systems on floral and faunal differences between regions. The WWF classification defines an ecoregion as:

A large area of land or water that contains a geographically distinct assemblage of natural communities that:

(a) Share a large majority of their species and ecological dynamics;
(b) Share similar environmental conditions, and;
(c) Interact ecologically in ways that are critical for their long-term persistence.

According to WWF, the boundaries of an ecoregion approximate the original extent of the natural communities prior to any major recent disruptions or changes. WWF has identified 867 terrestrial ecoregions, and approximately 450 freshwater ecoregions across the Earth.

The use of the term ecoregion is an outgrowth of a surge of interest in ecosystems and their functioning. In particular, there is awareness of issues relating to spatial scale in the study and management of landscapes. It is widely recognized that interlinked ecosystems combine to form a whole that is "greater than the sum of its parts." There are many attempts to respond to ecosystems in an integrated way to achieve "multi-functional" landscapes, and various interest groups from agricultural researchers to conservationists are using the "ecoregion" as a unit of analysis.

The "Global 200" is the list of ecoregions identified by WWF as priorities for conservation.

Ecologically-based movements like bioregionalism maintain that ecoregions, rather than arbitrarily-defined political boundaries, provide a better foundation for the formation and governance of human communities, and have proposed ecoregions and watersheds as the basis for bioregional democracy initiatives.

Terrestrial ecoregions are land ecoregions, as distinct from freshwater and marine ecoregions. In this context, terrestrial is used to mean "of land" (soil and rock), rather than the more general sense "of Earth" (which includes land and oceans).

WWF (World Wildlife Fund) ecologists currently divide the land surface of the Earth into 8 major ecozones containing 867 smaller terrestrial ecoregions (see list). The WWF effort is a synthesis of many previous efforts to define and classify ecoregions. Many consider this classification to be quite decisive, and some propose these as stable borders for bioregional democracy initiatives.[3]

The eight terrestrial ecozones follow the major floral and faunal boundaries, identified by botanists and zoologists, that separate the world's major plant and animal communities. Ecozone boundaries generally follow continental boundaries, or major barriers to plant and animal distribution, like the Himalayas and the Sahara. The boundaries of ecoregions are often not as decisive or well recognized, and are subject to greater disagreement.

Ecoregions are classified by biome type, which are the major global plant communities determined by rainfall and climate. Forests, grasslands (including savanna and shrubland), and deserts (including xeric shrublands) are distinguished by climate (tropical and subtropical vs. temperate and boreal climates) and, for forests, by whether the trees are predominantly conifers (gymnosperms), or whether they are predominantly broadleaf (Angiosperms) and mixed (broadleaf and conifer). Biome types like Mediterranean forests, woodlands, and scrub; tundra; and mangroves host very distinct ecological communities, and are recognized as distinct biome types as well. 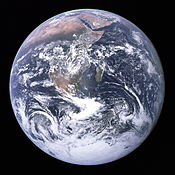 View of Earth, taken in 1972 by the Apollo 17 crew. Approximately 72% of the Earth's surface (an area of some 361 million square kilometers) consists of ocean.
See also: Large marine ecosystem

Marine ecoregions are: “Areas of relatively homogeneous species composition, clearly distinct from adjacent systems….In ecological terms, these are strongly cohesive units, sufficiently large to encompass ecological or life history processes for most sedentary species.”[4] They have been defined by The Nature Conservancy (TNC) and World Wildlife Fund (WWF) to aid in conservation activities for marine ecosystems. Forty-three priority marine ecoregions were delineated as part of WWF’s Global 200 efforts.[5] The scheme used to designate and classify marine ecoregions is analogous to that used for terrestrial ecoregions. Major habitat types are identified: polar, temperate shelves and seas, temperate upwelling, tropical upwelling, tropical coral, pelagic (trades and westerlies), abyssal, and hadal (ocean trench). These correspond to the terrestrial biomes.

The Global 200 classification of marine ecoregions is not developed to the same level of detail and comprehensiveness as that of the terrestrial ecoregions; only the priority conservation areas are listed.

In 2007, TNC and WWF refined and expanded this scheme to provide a system of comprehensive near shore (to 200 meters depth) Marine Ecoregions of the World (MEOW).[6] The 232 individual marine ecoregions are grouped into 62 marine provinces, which in turn group into 12 marine realms, which represent the broad latitudinal divisions of polar, temperate, and tropical seas, with subdivisions based on ocean basins (except for the southern hemisphere temperate oceans, which are based on continents).

A similar system of identifying areas of the oceans for conservation purposes is the system of large marine ecosystems (LMEs), developed by the US National Oceanic and Atmospheric Administration (NOAA). 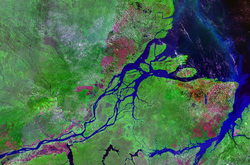 The Amazon River in Brazil.

A new map of Freshwater Ecoregions of the World, released in 2008, has 426 ecoregions covering virtually the entire non-marine surface of the earth.[7]

The Global 200, a set of ecoregions identified by WWF whose conservation would achieve the goal of saving a broad diversity of the Earth's ecosystems, includes a number of areas highlighted for their freshwater biodiversity values. The Global 200 preceded Freshwater Ecoregions of the World and incorporated information from regional freshwater ecoregional assessments that had been completed at that time.